A little trip to the land of giants 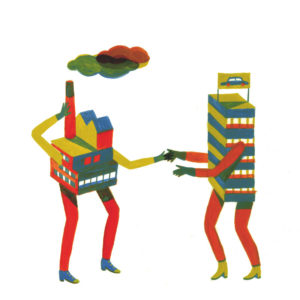 In the land of the Giants, live powerful merchant empires with financial means more imposing than those of many states. With their considerable self-esteem, these Giants love to promote themselves (and their products); conversely, they have amnesia when it comes to the dark side of their behavior.

Once a member of IG Farben (the German chemical empire in the pay of the Nazis), Bayer sums up its 150 years of existence under the following formula: « Bayer: 150 Years of Science for a Better Life ». This slogan echoes that of another chemical company, the American DuPont Group, which in 1935 adopted the motto: « Better living through chemistry ».

The tribe of Giants likes to present itself in its best light, working for the progress of humanity through a host of technological innovations that are supposed to lead us to a brighter tomorrow. However, from the cup to the lips, the beverage offered can be similar to a liquid of more toxic. Thus, at the same time that it invented nylon (a material that won the hearts of women and colored the collective imagination with sensuality), the American multinational DuPont also defended tooth and nail a doubly deadly poison: leaded gasoline (the latter being then perfectly known for its extreme toxicity). A poison that DuPont marketed together with General Motors and Exxon through a company of which they were the shareholders: the Ethyl Corporation.

As a matter of fact, one should never take the enchanting speech of private companies at face value. To understand them, one must look closely at their internal practices and group behaviors. Because the Giants, if they compete on the markets, know perfectly well how to get along when they face common interests. And in a universe called capitalism, where the accumulation of ever-increasing capital is the law, the first horizon shared by the Giants is to continue to grow in order to gain influence in their extremely hierarchical « tribe ». And to achieve this, the Giants have found a way to convince the political world to embrace the tale of « free trade » (see pages 10–11), which will allow them to eat each other up in increasingly titanic mergers and acquisitions.

the tribe of giants in search of exPanSion

We could go back sixty years. To land in the middle of the Cold War, in the 1950s, and to detail the way in which the American secret services and certain giants made in the USA, the Ford and Rockefeller Foundations, for example, agreed to finance various movements (cultural and political) favorable to the economic unification of the European nations. A strategy aimed at building a bulwark against the Soviet ogre, but also to sell the industrial surplus coming from Uncle Sam.

Let’s just go back to the year 1983. On April 6 and 7 to be exact, when 17 business leaders met in Paris at the initiative of Pehr Gyllenhammar (head of Volvo), who invited the heads of Fiat and Renault, Saint-Gobain (of which asbestos was then one of the flagship activities), Nestlé, Thyssen, Siemens, Philips… Together, these Giants found a clan called the Round Table of Industrialists. A Round Table that has a first objective in mind: to widen the common horizon of all these private firms by leaving the narrow borders of national markets to found a huge European market. A European market based on precise legal laws: free economic circulation, possibility of purchases and mergers of companies, race to competitiveness… This message was received loud and clear by the European Commission, two of whose representatives (Trade and Monetary Affairs Commissioners Etienne Davignon and François-Xavier Ortoli) attended the inaugural meeting of the Round Table. Above all, the proposals of the Round Table of Industrialists were practically « copied and pasted » by Jacques Delors, who became President of the European Commission in 1985 and transformed the wishes of the industrialists into a political treaty: the Single European Act. Signed in 1986 by the twelve countries that were members of Europe at the time, this treaty marked the birth of the single European market.

One year after this signature, in 1987, five Giants members of the Round Table founded a new clan called the Association for European Monetary Union (AUME). The idea of Fiat, Philips, Rhône-Poulenc, Solvay and Total was to complete the single market (whose operating rules were under political negotiation) by giving it a single currency. The principle was established in 1992, when ten of the twelve member countries of Europe ratified the Maastricht Treaty, one of whose key decisions was the creation of the Euro(1).

Of course, the Giants interpreted their success in achieving political victories as a famous incentive to venture further. This is why the Round Table of Industrialists still exists today (with some 50 members from the food, automobile, chemical, financial, oil and telecommunications industries) and why its projects are often successful (for example, the development of high-speed train networks throughout Europe and the introduction of private evaluation criteria in education). But many giants are also looking to a wider horizon, to an even bigger market, to a transatlantic merger of the American and European markets.

the ClanS of the ex-TRanSaTlanTiC exPanSion

Among these clans, one of the most active and influential is the constellation of American Chambers of Commerce (AmCham). What is it about? A vast global network bringing together, on a regional or national scale, local companies (which trade with Uncle Sam) and American companies. The purpose of this spider’s web is to intensify the commercial relations between the United States and the countless nations in which AmCham has implanted its networks. At the European level, AmCham has a relay established in each country and has also an antenna working directly at the European Union level. While the national branches bring together companies of all sizes, the European branch brings together some 140 giants, including American Express and MasterCard, Monsanto and Coca-Cola, JP Morgan and Goldman Sachs, IBM and Microsoft, Google and Facebook, British American Tobacco and Philip Morris International, Time Warner and Walt Disney, as well as the DuPont/Exxon Mobil/General Motors trio, which once made a lot of money selling leaded gasoline.

Since the mid-1990s, the Europe-America Business Council and the Transatlantic Business Dialogue have also been trying to convert the political world to the transatlantic « free trade » fable. Also composed of powerful multinationals, these two lobbying groups decided to join forces and merged in early 2013 to form a single clan: the Transatlantic Business Council. The latter counts today among its members American and European giants such as Audi, Deutsche Bank, Deutsche Telecom, Ford, Philips, Siemens, Umicore but also… many multinationals already members of the previous clan (AmCham Europe).

All these clans of Giants (called lobbies) influence the political world in different ways. Some of them create thematic groups on all the topics of society: agriculture and food, digital economy, employment and social, environment, intellectual property, financial services, health care, security and defense, transport and energy… These subjects are obviously approached according to the Giants’ point of view (the priority is to raise as much money as possible), who can work on them in different ways: sometimes a thematic group will write a general report (analysis, findings, perspectives) in which it will distil its advice; sometimes a thematic group will write technical notes, for example by amending, with the help of a specific legal vocabulary, a legislative text that is currently being drafted in official bodies.

Of course, in order to be successful in their attempts to influence, the Giants need relays at all strategic levels of decision making (which includes politics, but also international institutions, the diplomatic world, military staffs, and even obscure civil servants directly in charge of a political file). To achieve this, the Giant lobbies multiply the number of events (conferences, forums, study days) where elites from all walks of life meet, and reserve for their most elite members (i.e. those paying the highest dues) dinners and lunches with high-level decision-makers in restricted committees.

This is how it is: the tale of transatlantic « free trade » is not a political initiative, but a story written by powerful lobbies involving Giants dreaming of becoming ever bigger. To make sure they get their way, they recently created a super-clan, a federation of seven pro-transatlantic lobbies called the Merchant Alliance for a Transatlantic Trade and Investment Partnership. In addition to the various transatlantic clans already mentioned, this Alliance also hosts Business Europe, which brings together 41 employers’ federations (such as the Federation of Enterprises in Belgium) from 35 different countries. The aim of this Alliance of Giants is always the same: to obtain from the political world a strengthening of international competitiveness. A competitiveness which they will then abuse to say that it is necessary to help companies survive in a ruthless competition, thus justifying turning a blind eye to all the despicable practices of which the Giants are capable. With an almost total impunity, so much so that the eyes are now fixed on the new incarnation of evil: the terrorist ogre.

« As our economies are now interconnected, we cannot achieve a barrier-free transatlantic market without expanding and enhancing the flow of travelers and workers. The Transatlantic Business Dialogue believes that existing technologies should be used to enable all travelers to move through airports as quickly and seamlessly as possible. [The ability to do business, to remain competitive and innovative, depends on being able to recruit the best and brightest minds, to transfer employees regardless of nationality, and to develop business and investment relationships (with customers, suppliers and partners) across national borders. The international movement of people increases the ability to be innovative.

« In regulatory impact analyses of a chemical, nothing should lead to the disclosure of confidential information, and in particular information that could compromise commercial and financial interest if discovered […] » 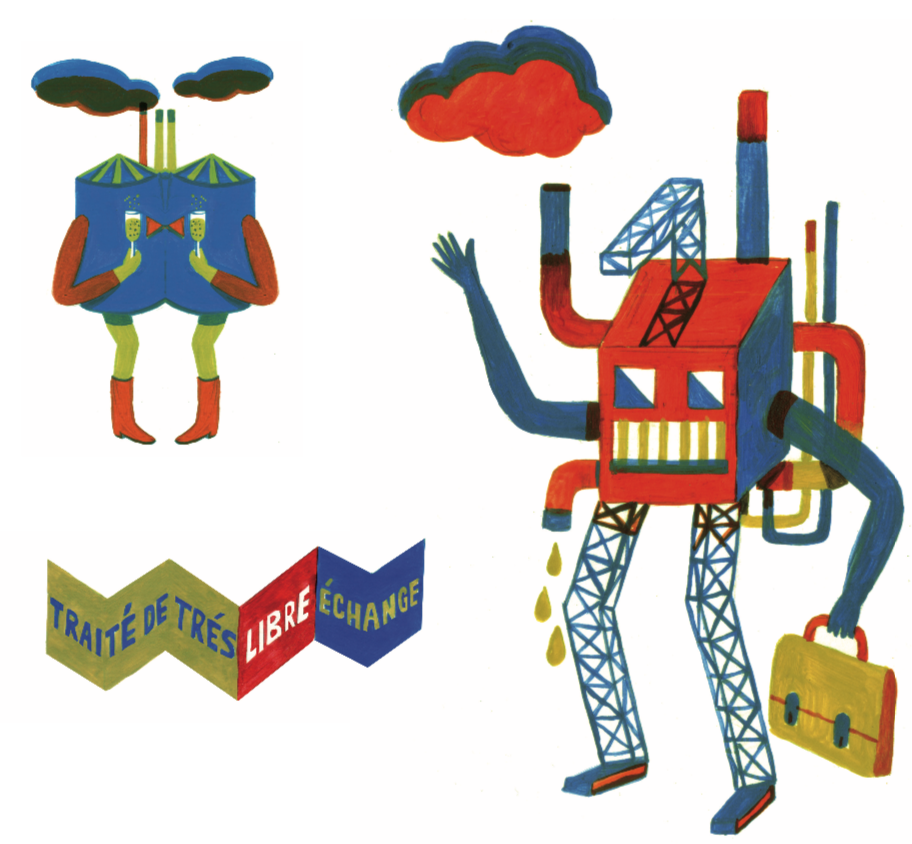