5G AT THE HEART OF A CHINA-US COLD WAR? 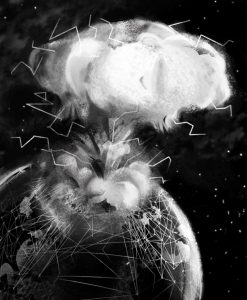 The opposition between the United States and China, presented as a legal and commercial battle, in reality masks a conflict for political and technological leadership driving economic growth. While we are witnessing the computerization of all areas of life(1), 5G technology promises to accelerate this digital takeover to disproportionate proportions.  » More than the general public, it concerns factories, ports, hospitals, highways … 5G aims to revolutionize our lives ‚ » said the business media Les Echos. A technology that is crucial for the economy of the future and for which propaganda is in full swing. Numerous press articles report on the different application modalities, the delays in Europe, the economic fallout… Its potential impact « for the economy » would be, according to the European Commission, €113 to 225 billion in benefits per year in 2025; for the European Union, more than a third would concern the automotive sector (with the new market for autonomous cars).  » 5G only in the test phase, Europe is lagging behind… in 2020 everything should accelerate, goal of the European Commission: to have in each European country a city connected to 5G(2) « . Two types of propaganda can be observed, the technological TINA(There is no alternative) and the Western propaganda against China, the new designated enemyof the United States.

» Huawei is not as careful as we are about data protection ‚ » says a journalist in an Arte report, which targets the  » backdoors  » feared by the U.S. government and which would explain this trade war. However, the journalist will later rectify it, the first to have used this surveillance technology are the United States, as denounced by Edward Snowden. Ironically, media reports in Europe regularly convey the idea that the Chinese are not very careful about data security, while the scandal that led to the European RGDP directive came from the United States.

The stakes around 5G, personalized by the conflict around Huawei, are presented as crucial, because it is the first place in the economy of the future, with its lot of goods to produce and consume. An economy that has been in the works for a few years but is just waiting for 5G to roll out, and thus  » authorize uses that were previously limited or even impossible: increased robotization in industry, massive deployment of fleets of autonomous cars, development of « smart cities » that will optimize their energy and transportation networks, etc. Not to mention products and services that are still unknown « According to the newspaper La Croix(3)… 5G, far from being just a new generation of telephone network, actually implies a massive deployment of new equipment, from the antenna to the consumer’s smartphone, huge new pools of potential economic returns.

THE EMERGENCE OF CHINA AS A DIGITAL POWER

If China’s economic rise has been meteoric since it opened up to the global economy in the 1980s, its emergence as a leading technological power is perhaps even more impressive. Twenty years ago, China was still lagging far behind the so-called « developed » countries in terms of technology, especially the United States. The Internet only arrived in the country in 1994 and the first Chinese digital companies were only established at the end of that decade.

20 years later, China is now the United States’ main rival in some of the most advanced technological and economic sectors, often far ahead of the European Union(4). There are several reasons for this success. They are beginning to be known but can be summarized quickly. First, the existence of a huge domestic market with Mandarin as a common language. Second, protectionist measures that have allowed some Chinese companies (especially in the digital sector) to grow sheltered from foreign competition. Finally, a proactive industrial policy has sought to move up the global value chain through targeted support for strategic sectors, or technology transfers imposed on foreign companies wishing to operate in the country.

These different elements have been present for a long time, but they will undergo a decisive reorientation and acceleration in the wake of the economic crisis of 2008. This has led to a decline in global demand, particularly from Western countries, which has prompted China to move even more quickly out of its role as the « workshop of the world » and at the same time to reassert itself as a leading economic and political power. Shortly after coming to power in 2013, the current President of the Republic, Xi Jinping, launched two large-scale plans that will translate this ambition both domestically and internationally: the « Made in China 2025 » plan and the « New Silk Roads(5) « .

The first aims to make China a world leader in a dozen strategic industrial sectors for the economy of the future (information technology, robotics, aerospace, etc.), notably through major investments in research and development. The second is a gigantic infrastructure plan designed to connect the Chinese economy even better with the various areas of extraction, production and consumption around the world, while promoting a Chinese-centric globalization that is more respectful of the interests of developing countries. In both cases, digital technologies play a key role in the projects supported, and Chinese technology companies take advantage of this to further strengthen their innovation capabilities as well as their economic and commercial power(6).

« THE « HUAWEI AFFAIR » AND THE SINO-AMERICAN « TRADE WAR

These companies include Huawei, which most of us know for its smartphones (the second best-selling smartphones in the world, ahead of Apple’s iPhone and behind the Korean Samsung), but which has also and above all become the leader in 5G networks. Indeed, not only is Huawei the company with the most patents currently declared in this field, but it also offers its products and services at a better price than most of its competitors. As a result, it is leading the race for global 5G deployment. This situation is intolerable for the United States for several reasons.

Commercial and security first. For the Americans, Huawei’s success is indeed emblematic of how China would have managed to rise to the top of the world economy through  » unfair  » economic and commercial practices. Officially, the U.S. decision to ban Huawei from government contracts and from all transactions with American companies was justified by the firm’s alleged spying practices, which would also jeopardize U.S. national security. Similarly, it is also Chinese « disloyalty » that has been denounced to justify the trade war launched by the United States against China in the wake of Donald Trump’s election. But while these arguments are partly true, they carefully fail to mention that the United States has not been left behind in terms of unfair practices and espionage, and that many American multinationals have been among the main winners of the Chinese development strategy…

A WAR OF HEGEMONY

These arguments thus serve mainly to mask the main reason behind the US economic offensive against China in general, and Huawei in particular: the geopolitical fear of the United States of seeing its status as a superpower threatened. The « trade war » between the two countries is thus part of a larger war of hegemony, in which the Americans are not so much trying to stop unfair practices as to curb the rise of an increasingly powerful rival. It is no coincidence that the main American recriminations against the

China were about the « Made in China 2025 » plan, nor if it was Huawei that was the object of the most virulent offensive. In both cases, we are talking about mastering technologies that are decisive for the economy and the army of tomorrow. 5G, for example, is seen as the key infrastructure for future digital developments, not least because it allows colossal amounts of data to be exchanged at a speed previously unheard of. Contrary to a widespread idea, its interest lies mainly in its industrial applications (commercial, but also military) and rather little in its advantages for the average consumer. So much so that a recent US National Security Council document considered that if China could dominate the telecommunication network industry,  » it would become the big winner politically, economically, and militarily « (7).

A « COLD WAR » THAT RECALLS ANOTHER ONE

In this context, it is difficult not to draw parallels between the current debates surrounding 5G and older debates concerning nuclear power. Indeed, in both cases, we find technologies whose proponents praise the unlimited promises, while minimizing the health and ecological risks, but also the geopolitical stakes. Nuclear developments were thus at the heart of the Cold War between the United States and the USSR (both as cause and consequence) with dramatic results for the world’s populations. Today, 5G appears to be one of the central issues in the new (digital) cold war that now pits the United States and China against each other, again with potentially catastrophic consequences for the rest of the planet. At the very least, this situation should push as many national and international actors as possible to defend a logic of  » digital non-alignment(8) « , which focuses in particular on the establishment of mechanisms and institutions for the democratic control of the main digital infrastructures. Ideally, it should contribute to questioning the relevance of technologies such as 5G, for which it appears more and more, like nuclear power, that the risks could far outweigh the benefits…

The exacerbated economic competition between China and the United States leads to a technological surge stimulated on both sides, updated by attempts to boost growth and all the associated nuisances. The general press, which participates greatly in the technological TINA, seems to accept it. At a time of global crisis, where economic, financial, social and health crises are added to the ecological crisis that pushes so many young people to demonstrate in the streets, the political and media perspectives on 5G rarely go in a direction of refusal of a technology presented as a solution for ecological problems. The Internet of Things, smart cities and « autonomous » cars are generally presented as tools to respond to the « climate emergency », while in reality these technologies generate extractivism and excessive pollution, as well as many other nuisances. Without waiting for a change in political and media positions, at the citizen level, other perspectives are possible, as Matthieu Amiech(9) pointed out in an interview with the website Reporterre.  » A crucial issue is the refusal of surveillance by drones, smartphones, facial recognition, which is being implemented in this period of containment decided by public authorities .

Robin Delobel and Cédric Leterme (researcher at GRESEA and CETRI)