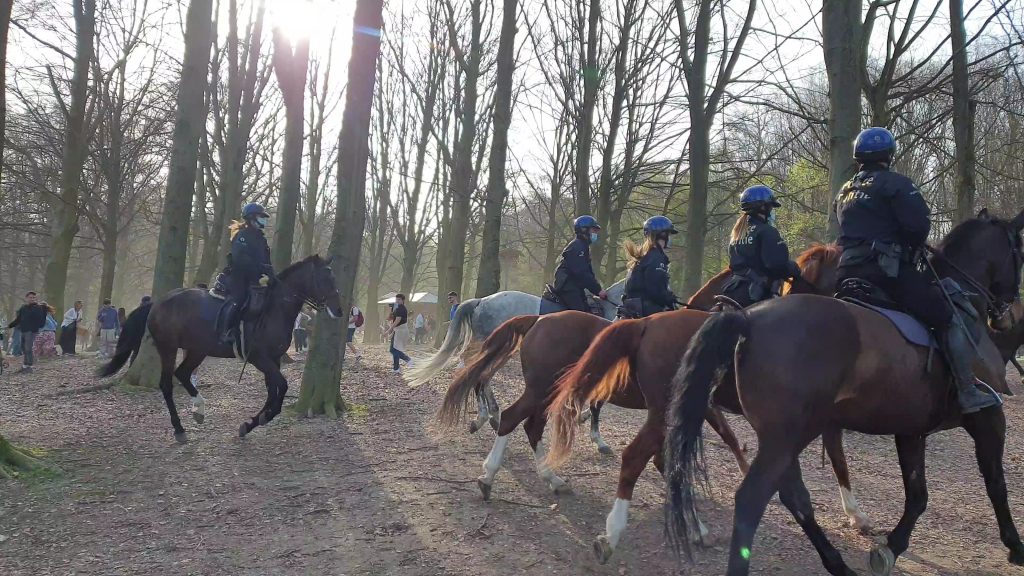 On April 10, we received this letter:

It’s been a few days since I got back on my social networks, after taking a break to preserve myself. I was part of the crowd of young people at the Bois de la Cambre, receiving blows and insults on the spot by the police and then, later, by some citizens who did not understand our reactions. Opinions are flying, everywhere, all the time.

This break from networking allowed me to think a lot about the way information circulates. I’m in my bachelor’s degree in communication and the treatment of some (if not all) subjects scares me. The classic newspapers are hiding part of the truth about the events of April 1 and do not give a platform to the main people concerned: the young people.

When I reinstalled the networks and spoke out about the violence in Brussels earlier this month, some friends advised me to write to you. I just visited your site. I am delighted to discover a new press project that allows words to be untied by refusing the diktats of capitalism and certain politicians. And then  » Journal Antiproductiviste — pour une société décente « , it could not but speak to me .

I wrote a letter in response to a classic newspaper, which was quick to write about La Cambre and the lack of respect for young people in the face of covid measures. I don’t really expect to get a response from them, although I must admit that it would make me feel better if our views were heard as well. You should not be defeated by 4 pages.

I haven’t had a chance to read your paper yet. There are 3 days, 13 hours and 16 minutes left as I write this. I’m looking forward to the issue. I don’t know how you manage your subjects, but I copy below an open letter, which I hope will find a place in one of your pages. I am at your disposal to write in another format that might be more suitable for your publishing lines.

I look forward to hearing from you in 3 days,

It is April 9. I read the pages of some of my grandfather’s journals, which are lying on the kitchen table. I am appalled by some of the comments about the Bois de la Cambre event.

Many are the experts to whom the so-called « classic » newspapers give the floor: Prime Minister, epidemiologist, doctor of anthropology. All of them express themselves on the event. Columns and columns, which form entire pages. Wouldn’t it have been fair, too, to give the floor to the main people concerned? Where are the young people? Where are the voices of all those academics, workers, schoolchildren, who have been in solidarity and sacrifice for more than a year with and for the population most at risk?

On many occasions, we have sounded the alarm. We started online. Nobody talks about it, nothing changes. Then we drew circles, spacing ourselves from each other to shout that we were underwater while respecting sanitary measures. What more could we do? We tried to express ourselves by respecting the rules and measures of use, we had no feedback. The weeks go by, the classes pile up. We are organizing a new demonstration, in Brussels near the ULB. There were more of us, but we were all masked and, above all, all outside. Once again, the weeks pass, the classes pile up.

Then there was the Cambre. The world is in uproar. Instead of addressing student conditions and the reasons for such disobedience, politicians are still stabbing us in the back. Our ministers talked more about the event than about our disastrous learning conditions. How can we still have confidence? How can we still hope that our futures are in good hands?

I hope that at the next event, our anger and sadness can be heard. Young people are still being sacrificed and put out to pasture for citizens who are only entitled to a part of the story. Once again, the projectors are totally malfunctioning. The lights only illuminate part of the problem in most of the newspapers offered and followed by the general public.

I picked up a bleeding girl, bludgeoned by a police officer. One. I came across a friend with gas burns in his eyes at close range. Two. I carried a young man who had been loaded by a horse, his friend was still lying on the ground. Four. In the metro, on the way back, videos were posted on social networks. There was this lady, shirtless, knocked down by a police charge. Five. And these two young people, bleeding, with their foreheads open. Seven. A few days later, I learn that one of my friends has a broken ankle, she was beaten by a policeman. Eight. The videos continue to circulate, the blood flows, relentlessly. I can’t count anymore. Not only 34 people were injured. The figures that have been proposed in most newspapers are lying. They may be good for the police. This is not the case for the youth, the citizens, the children of the country. Unless I was the only one who came across injuries, the numbers must be staggering. It’s high time the glasses adjusted and the numbers worked in favor of the truth.

We need more newspapers, journalists and editors who are willing to listen to different groups.

We need the words to be free, proposing the different versions and leaving to the citizens the party that he wants to take or to believe.

Hopefully, readers will go beyond what is served to them on a silver platter,

Hoping that independent newspapers will spread their wings and finally release the truth.

Waiting to see articles screaming of this much killed truth, placed on my grandfather’s kitchen table.

The revolution seems to have a taste of spring.