The race to the bottom: all losers! 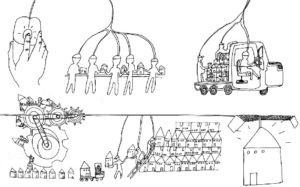 Since the 1960s and the joint explosion of productivism and consumerism, the sales argument that has become the determining factor is price. Buy smart, get a good deal, take advantage of our low prices, don’t pay too much: these are all slogans and slogans that go to great lengths to hide criteria as essential as life expectancy, after-sales service and reparability, while deliberately ignoring the conditions of production and transportation as well as the impact on our social environment.

The concern for good revenue management is obviously neither unjustified nor open to criticism. The famous fable of the cicada and the ant has long been taught to young children to be forward thinking. But, over the years, under the pressure of increasingly invasive advertising, La Fontaine’s wisdom has been trivialized and relegated to the shelf of moralizing old-timers. The expansion of easy credit and the development of large-scale distribution could not accommodate such a retrograde mindset. It was necessary, by a flood of advertising more and more invasive, to condition the consumer to believe that everything is accessible through a careful and judicious choice: « Especially do not pay too much, we can satisfy you at lower prices! This is the fuel of consumerism, the perfect complement to industrial productivism without which it cannot function.

the ConsequenCes oF undeFeCted ConsumeRism

Thus, from being a thoughtful citizen, aware of the consequences of his choices, the human being is degraded into a selfish consumer, constantly pushed to pay less in order to buy more. The consequences of the consumerist impregnation, in a context of generalized free trade against a background of low transport costs, are for the most part invisible to the Western consumer: the working conditions in Chinese factories, African mines and waste dumps, and Bangladeshi warehouses, the ecological disasters are only known episodically on the occasion of one or another shocking report or a serious accident… soon forgotten.

But other consequences, fortunately less dramatic, although perverse, are quite visible in our environment:

- almost total disappearance of local shops in villages and neighborhoods;

- destructuring of the social fabric, by eliminating small businesses and craftsmen, obliged in particular to meet sanitary or technical standards designed for industry or unable to align themselves with the prices demanded by large-scale distribution;

Who among us has not had to give up on having a defective item or a broken appliance repaired? Buying a new product is often less expensive than the cost of repair.

Repair requires real skill and know-how, while production, in one or another low-wage country, takes place on assembly lines where workers perform repetitive tasks for poverty wages and in slave-like conditions.

In fact, the race to the bottom most often means that costs are paid elsewhere or by others, or even by ourselves, without our knowledge.

The information and communication technologies that invaded us at the turn of the 21st century have added a new dimension to this race.

With the explosion of online sales (e‑commerce), the consumer, in front of his screen, is not only unaware of the conditions of production and transport of his purchase, he is also unaware of its commercialization and of the path that this purchase takes to be in his possession at an attractive price.

The world’s number one online retailer, Amazon, has just been the subject of an edifying field investigation by journalist Jean-Baptiste Malet(1). Infiltrated incognito as a temporary worker in the run-up to the 2012 Christmas holidays in the Montélimar logistics warehouse, Jean-Baptiste Malet describes « the best of all worlds » that he experienced for two months, a world of harassment, denunciation, humiliation and clear violation of labor law, an inhuman world where pseudo-modernity plunges us back into the worst practices of the 19th century.

Of course, online sales are modern and trendy; it crushes prices and creates jobs in logistics warehouses. However, if we look closely, as far as employment is concerned, it is not so clear: according to the Syndicat de la librairie française, independent bookstores generate twice as many jobs as large cultural stores, three times as many as large-scale distribution and, according to the figures of the Fédération du e‑commerce et de la vente à distance, eighteen times as many as the online sales sector(2).

Thus is created a new proletariat overexploited at the expense of the qualified profession of bookseller and the existence of places of conviviality, discovery and meeting that are the bookshops.

It is becoming increasingly apparent that we are all losing out in this race to the bottom. Especially, if we see, after a serious analysis, that the so-called lowest prices are not.

An investigation carried out in France, in the city of Toulon, by the journalist Daniel Bernard(3) recently showed that, for many food products, the prices charged in hypermarkets are, if you look closely, often higher than those offered by small specialized shops and especially in markets. If you take the trouble to compare the products, the difference in quality is obvious and discredits the hypermarket.

This may be an isolated investigation, but I am convinced that it is indicative of a frequently encountered situation.

The problem, to date, is that a majority of us, unconsciously infantilized by the advertising discourse and the connivance of politics, remains convinced of the contrary.

It is therefore « unwillingly » that it pays the hidden costs of the lowest price(4).