« FREE TRADE » AND THE ENVIRONMENT: THE RETURN OF THE FORGOTTEN VIRUSES? 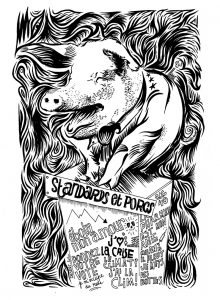 The summer of 2014 had an unenviable guest of note: Mr. Ebola. Identified for the first time in the 1970s, this virus showed from the start that it was a formidable killer: at the time, 318 people were infected and only 38 survived. Not content with killing a large majority of the people it infects, Ebola can spread very quickly because all body fluids (blood, semen, saliva…) are likely to carry it. However, an infected person only develops the first signs of fever after a period ranging from two to twenty-one days. And when the disease spreads, it causes multiple internal hemorrhages and blood clots, depriving essential organs (brain, kidneys, liver, lungs…) of oxygen, including the skin which blisters and tears at the slightest touch. Without protection, anyone who comes into contact with an infected living or dead person can be infected in turn.

This summer, Ebola triggered an unprecedented wave of infections. In a matter of weeks, the virus spread rapidly and sickened more than 3,000 people, half of whom did not survive (others will also die). Some estimate the situation to be even more dramatic, citing the number of 20,000 people infected. One thing is certain: from localized outbreaks, the disease is progressing and spreading, affecting many West African countries: Congo, Gabon, Guinea, Liberia, Sierra Leone, Senegal… In Central Africa, the Democratic Republic of Congo is also affected by a variant of the virus. Even in Western countries, quarantines are multiplying: they fear the intrusion of this hateful guest, Mr. Ebola…

The myth of progress facing its demons

Faced with this unprecedented epidemic, the World Health Organization is navigating between alarmism and optimism. At the end of August, the WHO feared a lightning spread and was working hard to avoid the worst: a possible worldwide contamination. At the same time, we learned that vaccines were being studied and that two (American) patients had been cured thanks to a drug that was still experimental. The alliance of the medical world (as scientific as it is commercial) and the political world would thus make it possible to stop the virus, thus reinforcing a myth dear to modern people: history is progress and man was born to dominate nature.

However, contemporary history increasingly belies this view: when it comes to climate change, is it not political impotence that dominates? Doesn’t every international climate summit invariably end in a resounding failure? From cyclones to droughts, current events remind us of the urgency to act in this area. In May 2014, the skies let loose in the Balkans, dropping the equivalent of three months of rain in just three days. The floods and landslides that followed caused dozens of deaths, drove tens of thousands of people from their homes and deprived a million people of drinking water! In this war-torn region, it was also feared that these exceptional floods would unearth the 120,000 or so mines buried underground and move them to areas previously considered safe.

But global warming is also melting the glaciers. In March 2014, the U.S. Academy of Sciences published a startling scientific discovery on the subject: in the far northeast of Siberia, an unknown virus had just been awakened, buried in the ice for 30,000 years (the time when Neanderthal man disappeared). And like Snow White after Prince Charming’s kiss, this Pithovirus sibericum had not suffered from its long frozen sleep: it was intact and active, able to reproduce and mutate. Fortunately, Pithovirus sibericum is inoffensive for the man; but its survival at the end of a long process of freezing has what to worry. Because we now know that mining drillings or melting ice (due to global warming) are likely to awaken ancient viruses, carriers of diseases to which we are no longer immune. Finally, and with all the horror of which it is capable, Ebola reminds us of what we really are: a creation of nature that with a simple whim as tiny as a virus can wipe us off the map of the living with disconcerting ease and cruelty.

Seen from this angle, the European political priorities are frightening. The summer of 2014 saw the European and Canadian authorities announce an agreement on the reciprocal opening of their markets. The 521-page Canada-EU Comprehensive Economic and Trade Agreement (CETA) will strengthen the grip of multinational corporations on the political world by allowing private behemoths to compete (through their choice of location) with the Canadian and European legislative systems. An Investor-State Dispute Settlement clause will also allow corporations to take governments to international arbitration tribunals, where national law has no standing, when democratically passed legislation threatens to undermine private profits. Our tax money will be used to fill the pockets of multinational companies (and their shareholders) already rich… This decision is all the more revolting as the European Commission has just completed a public consultation on this issue, with an unprecedented popular success (nearly 150,000 responses) following the calls and mobilizations to oppose such a project! ( on this subject, see Kairos n°13). In the wake of this, the European Commission also continued its negotiations to create a single market with the United States.

This agreement with Canada and these negotiations with the United States reflect contemporary political priorities. These are also the source of the political impotence to curb global warming: taking drastic measures to reduce greenhouse gases is incompatible with the principle of « free trade », which consists in offering multinationals more and more freedom to organize their production chains on a global scale, and to drill and bore the Earth in search of precious gases and minerals. Far from controlling nature, the political world is leading us down a road of worsening environmental problems and chaotic loss of climate control. A choice that hardly constitutes a progress, but rather a famous setback in the scale of human political priorities.

Fortunately, nothing is final. Thus, the agreement with Canada still has to go through the ratification process, which in Canada will pass successively through the European Council (in other words: the governments of the member countries), the European Parliament and (most likely) the national parliaments. Successive steps which are as many chances to defeat this detestable project… provided that we become aware of the importance of the issue and rally the movements (such as www.no-transat.be and the D19-20 Alliance) which militate against these deleterious political negotiations…