DOSSIER: Police violence in the news 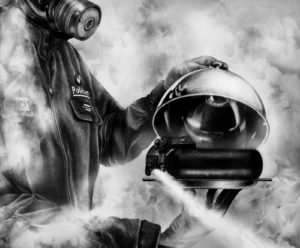 The police code of ethics requires officers to « ensure thatrespect and strive to ensure the respect of individual rights and freedoms as well as the dignity of each person, especially by applying legal coercion in a way that is always well thought out and limited to what is strictly necessary »; the Law on the Police Function commands the same officers to contribute to the « democratic development of the society ».

For any observer of the political, social and judicial current events, it seems obvious that the respect of these statements knows, to say the least, some incartades on behalf of certain police officers in the Kingdom of Belgium.

In this dossier, we will establish a series of observations about police violence, which is rampant in social movements and towards migrants, but which is also present on a daily basis for everyone, out of sight and behind the walls of police stations. We will also present initiatives and tools to respond to this situation.

The Observatory of Police Violence (ObsPol), set up by the Ligue des droits de l’Homme, recently celebrated its first anniversary, an opportunity for Kairos to welcome it in its pages. In a first text entitled ‘The protest put to shame’ (pages 10–11), members of ObsPol relate some recent repressive events, which played a preponderant role in the need for the creation of the Observatory. We will be able to see how, in our contemporary social history, the fundamental democratic rights of assembly and demonstration are widely questioned.

Just as we were wrapping up this issue, a new confirmation of the findings in this paper came to light. On May 15, a rally organized by the D19-20 Alliance to protest the Transatlantic Partnership Agreement (TPA) resulted in 250 arrests. Trade unionists, community activists and members of parliament were arrested simply for having come to express their disagreement with this treaty and the European Business Summit which was discussing it at the Egmont Palace. Swarms of police officers, in uniforms and in civilian clothes, dozens of police suits, fire engines, etc… All this for no reason at all! What is the cost of this kind of intimidation operation against the protesters of the European economic order?

In the following article ‘Civil society organizes’ (pages 12–13), they present the conditions ‑sometimes incredible- of the launching of the Observatory, and the total lack of control that the police services have. If some bodies exist, such as the well known Committee P, they are mostly inefficient and limit themselves to registering complaints and producing incomplete and sometimes dubious statistics.ObsPol also presents a first assessment, after a little more than a year of existence.

In order to continue the observation of the state of police violence in Belgium, we then present the article ‘State violence against migrants: the voice of the invisible’ (pages 14–15), for which we met members of ‘Getting the voice out’. This group, by establishing contacts with the detainees of the centers for foreigners, spreads their word to the outside world and presents the realities at work in these places and at their ‘exit’: in the airports and airplanes during expulsions from Belgian territory. Their website reflects these realities kept in the dark by the Belgian authorities.

With these different articles, we can see that police violence is often linked to migration issues, and is ruthlessly directed at foreigners and people in Belgium who want to question European policies against migrants. Here we are really facing the black spot of our political systems, Belgian and European.

For the next part, we propose a meeting with Mathieu Beys, a jurist member of ObsPol, who presents his book, a ‘legal and practical manual’ for everyone’s use: ‘What rights when facing the police?(pages 16–17). Published in March of this year, this book is indispensable in more than one way, notably because it makes legal issues accessible to everyone, in clear language, as should always be the case for matters that claim to regulate our life in society. The author of the manual will end this file with a quiz (page 18) ‘Do you know the powers of the police and your rights in the event of an intervention?’ Measure your knowledge!

At the end of the file, a contest will allow three Kairos readers to win a copy of the book ‘What Rights to the Police? The articles are accompanied by some short extracts of testimonies, available in full and among others on the sites of the Obervatoire des violences policières: www.obspol.be and Getting the voice out: www.gettingthevoiceout.org/