How to make Beatrice Delvaux fit in her box? 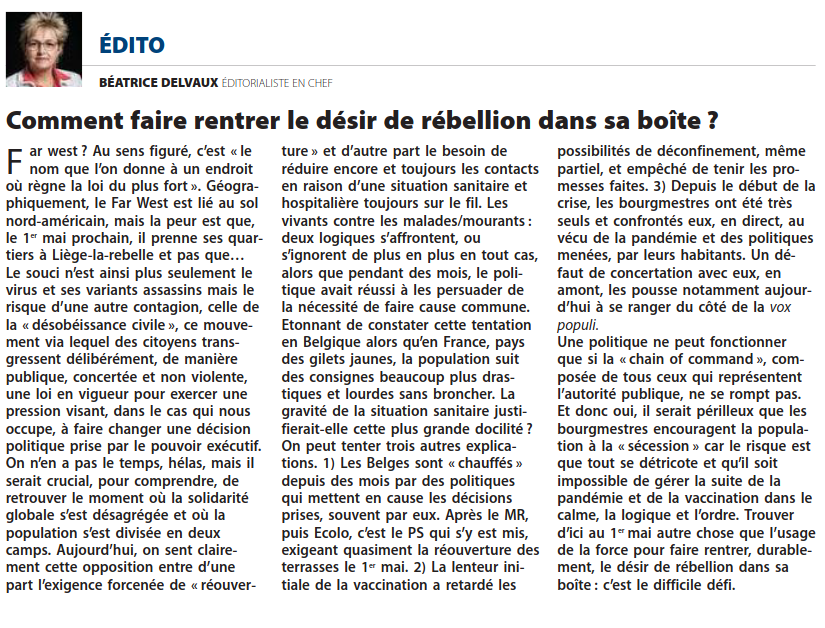 A Kairos reader sent us his reaction to Beatrice Delvaux’s editorial in Le Soir of April 16. As chief editor of Le Soir, she admits without ambiguity the true function of the daily newspaper: to extinguish all dissent and obtain the obedience of the people.

The fear that you feel concerning the Wild West taking its quarters in « Liege-la-Rebelle » is for my part a feeling of pride. Proud that my people have decided not to let it happen again. People of which you are obviously not a part.

Indeed, you, many media, many politicians, in short, the power, have been trying for months to make the Belgians feel guilty for the current situation. Situation caused by the failures of our successive governments. Let’s not go into details.

It is fair to say that the citizens you are talking about want to change one (or more) « political » decision(s). Politics, it is important to specify, because it is in no way based on scientific facts, again, let’s not go into details.

You dare to speak of solidarity? With what legitimacy? You, who don’t put yourself for a single second in the shoes of restaurant owners, cooks, waiters, clerks, bartenders, dishwashers, entertainment workers, nightclub managers, cafe managers, etc. Your idea of solidarity is not mine, because you are only in solidarity with those who have power over those who do not.

You oppose sick/dying and living, but are you aware that life is a deadly disease? Do you know that people die because of covid, some die from covid, of course, but I’m also talking about suicides, deaths caused because of cancelled or postponed operations. All this for a disease whose lethality is not as high as you and your friends would have us believe. Nothing matters anymore, except the covid.

Let’s play your game of the 3 explanations for the Wild West settling in our home:

The citizens, the people, the little people only want to live, to live again, to survive… remember that our country exists today because people rebelled.

The desire of rebellion will remain outside its box: Mrs. Beatrice Delvaux, inside.