THE « POLITICAL » EVOLUTION IN THE WEST 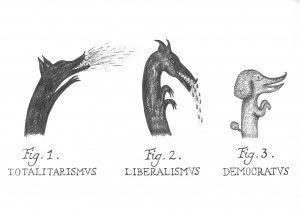 « Liberalism is not the antonym of totalitarianism: it is its root. »(1)

As if it were good news, philosophers and scientists are announcing that we are heading towards ever more complexity, in all fields, mainly for two reasons. First, because the division of labor is constantly more advanced; second, because knowledge accumulates and disperses, but does not prevent the extension of the « sphere of the unpredictable and unknowable »(2). « In an increasingly complex world, where the interaction of heavy structures constantly keeps the system far from equilibrium and makes any prediction very uncertain, we may not have the intellectual means to identify the source of developments that seem undesirable to us, nor therefore the ability to stop their course.Philippe Van Parijs already remarked a quarter of a century ago, just before the digital era(3). Understanding the evolution of industrialized societies is an increasingly difficult exercise with the passage of time, because of the extraordinary complexity of the causal mesh in the modern world(4). There was a time, simpler and not so long ago, when we could clearly identify those who exercised — fiercely — power: Hitler, Stalin, Mao, Franco, Mussolini, and also Pinochet, Suharto, Amin Dada, Bokassa, Papa Doc and other Pol Pot. In 2017, we can still name names and see heads in the media, but these oligarchs are one and the same and are merged with the techno-bureaucratic megamachine of which they would have become supposedly irresponsible cogs; they still and always have enormous power, often discretionary. When a political or economic leader signs a document, he or she continues to impact the lives of millions of fellow citizens(5). Is this acceptable in a democracy?

VALLS OF THE LABELS

How to name the new « political » form that is coming to the West? From the Thirty Glorious Years onwards, political scientists had developed habits of language. Thus they spoke of « liberal market » democracies. Do we (still) live in a market democracy? No, because the principle of the latter, if one thinks that it should be « free », is flouted by the oligopolistic maneuvers of the transnationals. Do we (still) live in a liberal democracy? Less and less, because civil liberties are being eroded by the legislative arsenal that uses the fight against terrorism as a pretext. We are in an interregnum, in the sense of Gramsci: one system is dying, the next one has not yet given birth, and everything is happening in pain. Many are content to gloss over « populism », which is only one aspect, and not the most threatening.(6) It would be more appropriate to worry about the advent of a new kind of totalitarianism (cf. below), and at the same time to stop using the concept of democracy, except to qualify it as prosaically electoral and representative; or to label it with the determinant « of control », or even « of constraint » (Parts and Labour); or to speak of a « totalitarian democracy » (Roland Gori), or to replace the term by « oligarchy » (Hervé Kempf) or « de-civilization » (Olivier Nachtwey).

Elections have become a carnival-like event (Michel Weber) that tries to give the change and continues to be defended by people of the left in the name of the memory of our ancestors who sacrificed themselves so that everyone could vote. But the times have changed. We have entered the regime of technocratic-digital-algorithmic governance, driven by a caste of professional politicians, corporate captains, shareholders, jackbooted scientists, technologists, military and media propagandists, who meet in private circles or the business clubs, from the famous Davos Forum to the more discreet Bilderberg group, via the Trilateral Commission and the European Round Table(7).

In If democracy fails(8)Italian linguist Raffaele Simone notes that not only are democratic institutions in a bad way, but the democratic mentality, usually based on civic virtues, is also melting like snow in the sun, as is the democratic mythology, the narrative that helps reinforce « the idea that it is in democracy that we gather the best. »(9) Distorted conception of equality and freedom, decline of the welfare state, ravages of financial capitalism, pantouflage between public authorities and the private sector, refusal of politics and electoral abstentionism, opacity of institutions, incompetence of elected officials, unlimited inclusion of migrants, the « democratic fairy » who is asked for everything, the harmful role of the media and the Marketing in the formation of public opinion, ideological inconsistency of the new protest movements (Indignés, Occupy, Nuit debout), fears and uncertainty, weave the mesh of this crisis of decomposition. According to him, as long as democracy does not simply fall by the wayside, the future lies in a low-intensity democracy where « the minority will designate the majority », « a logical perversion that no regime can survive »(10). While acknowledging this crisis of representation, Simone does not believe in the possibility of direct democracy and notes bitterly that the The« natural political thought », i.e. the law of the strongest, is again taking precedence over the necessary democratic fiction guaranteeing political equality.

As a reminder, neoliberalism is « a process of reorganization that aims to govern efficiently through the instrumentalization of individual freedom and generalized competition. » (11) Some observers believe that they see its disintegration and even its imminent disappearance behind the Brexit or the election of Donald Trump. Emmanuel Macron’s has already denied this. The youngest president of the Fifth Republic is endorsed by the entireestablishment, starting with the very liberal European Commission. It is true that the neo-liberal promise of individual emancipation through merit is in trouble, especially among the working classes, and more and more among the middle classes. Is this enough to cause a massive rejection? Apparently not, because the neoliberal subject(12) — hyper-individualistic, entrepreneurial and at the same time focused on one’s private life and feelings — has been firmly anchored in the collective imagination for three decades and defended by « The demo-liberal state [qui] is now little more than an agency in the service of individual and group rights.(13) Unfortunately, this subject is not about to give way to another ideal type that would return to the popular virtues celebrated by Orwell: honesty, generosity, loyalty, benevolence, mutual aid, which can be subsumed under the term ordinary decency (common decency). On the economic front, even if there is some talk here and there of protectionist measures, the « free » market is still the reference entity for almost all politicians, who seek to articulate « consumerist behavior to organizational and political behavior ».(14) Strategically, as César Rendueles explains, « Since the early 1980s, neoliberals have developed aggressive strategies to manage psychological suffering, the breakdown of public institutions, social fragility, cultural deterioration and political polarization, so that they can have a positive impact on their project.(15) And we will see that so far this ruse has paid off!

TOTALITARIANISM, A WORK IN PROGRESS

We are indeed heading towards a new totalitarianism, but a « soft » totalitarianism (16) different from the ultra-repressive forms of the 20th century, where the State and ideologies are dissolved in the economic order (17). Today, voters-consumers have their reasons to defend the system, if only by default: notwithstanding ever more professional, social and administrative constraints, they feel « emancipated »; free to move around, they use and abuse it in the tourist frenzy; they consume more and more on credit, and the goodwill follows, until now(18)They can choose the spouse of their choice to found a family and procreate freely, without restriction, now including in China; they can legally satisfy a good part of their sexual and identity fantasies, by manipulating the laws of filiation through the use of Finally, except for the irreducible Luddites, technological fetishism is the backbone of all agents, all classes included. In short, what there is to lose matters more than what there is to gain in terms of reducing economic inequality, because elsewhere egalitarianism is the rule: « It is this kind of egalitarian distribution of enjoyments, of great communities around shared enjoyments that allows us to state that, in a certain way, in our countries at least, and even if they are often bored, people are rather happy », explains the psychoanalyst Charles Melman(19). Contrary to what the latter claims, I doubt that they are even bored! Let’s dare a hypothesis: as long as it manages to provide for the basic needs of the population, capitalism still has a bright future ahead of it. In other words, as long as the information and communication technologies (ICT) are functioning normally, as long as there is a regular supply of gas stations and supermarkets, there is practically no risk of revolt. This tragicomedy of bread and games is replayed endlessly. This situation, which may last for a few more decades, can be linked to La Boétie’s invaluable analysis of voluntary servitude.

This new wave totalitarianism(20) sees financialized and competitive capital established as « a social and total objective model, much broader [donc] than a financial mechanism » . (21) Let us mention some of its components: the social acceleration and glorification of the unlimited movement of competition, particularly present in neo-management; the confusion of discourse and the splintering of thought, exemplified by climate-negationism and post-truth politics, among others; the commodification of « ecosystem services », which will one day make the Earth look like a peeled and wrung-out ball; the seemingly infinite momentum of technoscience; hyper-individualism and the tyranny of the majority and of subjectivities, which Tocqueville had already foreseen in 1835 in Democracy in America. The Quebec philosopher Maxime Ouellet sees in cyber-capitalism the new form of the system. Born almost 70 years ago, cybernetics is currently being declined in ICT, which represents its globalized apotheosis. Social relations are mediated and abstracted by communication, so that « the distinction between the lived world and the system appears to be increasingly inadequate »(22), alienation manifesting itself « no longer as a loss of subjectivity, but rather as a loss of objectivity itself »(23). Tomorrow, global civil society could be self-regulating thanks to ICTs, like the spontaneous market order theorized by Hayek. The promoters of governance, relying on cybernetic principles, « attempt to implement steering, control and feedback mechanisms »(24), using Internet networks. We can also call this communicational capitalism or, in a more positive (and more hypocritical) way, cognitive capitalism.  » The redefinition of politics in terms of networks dissolves its conception in modern terms of power relations and the capacity to institutionalize power, » adds Ouellet(25).

Whatever the label, this evolution announces nothing less than the obsolescence of politics, and there is certainly reason to be alarmed. Who is ready to (over)live in a utilitarian, productivist, consumerist and alienating anthill to a point that only rare thinkers like Aldous Huxley could imagine? We will miss the good old days of politics, passions and conflicts.