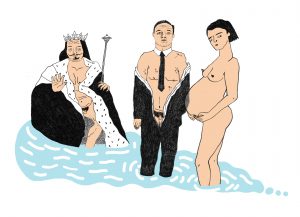 Everything passes, says Heraclitus. And this is a universal truth that cannot be disputed. There is nothing stable in the infinite universes, in the world that is ours; and in ourselves as well, since from birth to death, the body never ceases to change: from the infant incapable of any initiative to the old man paralyzed by the weight of years, « A life passes in the time of a spark » said Montaigne; but, in the secret of our hearts, we prefer to believe, in vain, that we are here forever and we think of death only from afar, as a vague and improbable event. And yet, we can see this crazy illusion when, around us, parents, brothers and sisters, and friends leave. This is true of all things and all living beings. In the same way, human enterprises, political systems, kingdoms and empires, regimes and institutions are only there for « a while ». Rome was defeated by the barbariansThe great Revolution of 1789 abolished the old monarchical regime, the Bolshevik system, while giving to dream to millions of proletarians at its birth, collapsed in a few weeks following the destruction of the Berlin Wall, the thousand-year Reich promised by Hitler will have lasted only twelve years, leaving behind only ruins and desolation; and tens of millions of deaths.

Obviously, in the head of the powerful and their affidavits, the systems they institute, the rules and laws they promulgate, finally, what they build and construct, they hope for long life, even eternity. Thus the Jupiterian and already quasi-monarch, Emmanuel Macron, freshly elected under the conditions we know, who, like other leaders in this sad world, intends to perpetuate and give all his chances to dominate again and everywhere to the odious neo-liberal economic system, which is a system among others and which, therefore, is also doomed to extinction. But the great perils are there, and we must have the courage to face them.

NOT OUT OF THE WOODS!

We now know that our planet, so beautiful and so blue seen from space, has already given almost everything or, more precisely, that we have already taken almost everything. All resources, fossil and otherwise, are on the verge of exhaustion and we have already entered the era of scarcity, which will inevitably be followed by scarcity. In the face of this, and despite the alarms, although one minister of ecology calls for a general awareness, we see others, from the economy, the budget, what have you, congratulating themselves and rejoicing to see « the recovery » begin and business going better and better and, correlatively, the leaders of large companies shamelessly put millions of dollars or euros in their pockets or elsewhere; this is not the concern of the little people. Who is still living or subsisting, according to his means, spending a good part of his time wandering in shopping malls, spending money becoming more and more scarce for some; in short, to continue to go, without a qualm, his way of more or less satisfied consumer, as if nothing had happened.

But who, how, or what vast and irresistible movements to expect that could accomplish the inevitable changeover?

It is true to say that « organic » is becoming more and more popular — department stores now have their Nature department, more or less well supplied; short circuits and grouped purchases are in the air of time; we can be delighted but we are far from the generalized infatuation. For the most part, and for many of our contemporaries, the habits and injunctions of advertisers to do more and more of anything remain, alas! well anchored. We can see that, from this point of view, we are far from being out of the woods, and even then, we would have to find the door. There are some who are at least looking for it: these political parties or movements, with still very modest numbers, but which add to the demand for justice, that of taking into account environmental imperatives. But for the rest, we can also see that the traditional parties are still using the old, worn-out and ineffective recipes to respond to the demands and emergencies of the moment.

We are therefore faced with a crucial alternative, at the junction or, if one prefers, at the in-between point of an old world and a world to come that will have to do away with the old one. But who, how, or what vast and irresistible movements to expect that could accomplish the inevitable changeover? What if the dominant forces of today were to impose an increasingly fierce tyranny of money and an increasingly bitter struggle for the mere survival of millions of people? Where are, and how can we bring about, the enlightened and conscious elites likely to thwart and defeat the fatal aims that are leading us to disasters of a magnitude unprecedented in the short and derisory period that has seen mankind born, grow and finally disappear from the face of the earth? So many questions that are impossible to answer. One thing is certain, and we return to the great Heraclitean principle: all this will pass. Gigantic and terrible will be the final outcome of our presence on the surface of this globe; the passengers of the vast and splendid vessel that it was will disappear at the same time as the thousands of species of animals that, already, there and now and for many, are in the process of extinction, by our only fault. Those who, like me, were twenty years old in 1968, will at least be lucky enough to have reached the stars before all this happened…