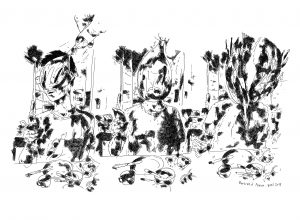 The earth (our good old planet) being reputed to be round and not flat, the result is that — in addition to the fact that certain portions of the vast territories that make it up are relatively apt to shelter the places that are most conducive to the innumerable activities of modern man — there are numerous crevices, caves and grottos, faults and fissures in front of which, seized with fear, the same modern man stops and sometimes, even, by distraction or an unfortunate accident, finds himself precipitated there, in spite of himself and for his own misfortune. One will note the resolutely metaphorical character of what precedes as, perhaps, of what will follow; we shall see.

Still, all things being equal, it is clear that Nature does not have a monopoly on holes and other unfathomable abysses, and that the genius of our species, in the course of its irrepressible evolution, has sown a quantity and variety of them that is truly astounding. We will not go into detail; the honorable readers of these pages do not have time to waste in vain enumerations and we believe that they are sufficiently informed and intelligent to grasp the meaning of our purpose. Besides, swamps or arid lands will do as well, since it is only a matter of making palpable what is passed over in silence by the patent commentators and irremovable experts in all disciplines. Namely that, very generally or, if one wants, seen from very high, the glorious epoch of the high level technique in which some, not so long ago, saw coming the triumphal emergence of the universal communication turns out to be, more and more, that of the cretinism and the death by asphyxiation of the Spirit. It is enough to observe the despondency and the heavy silence of the public places, haunted by the poor silhouettes leaning on the latest laptops, in the middle of which, sometimes, an attentive and happy face is still inclined in front of a book. And we can also see the use of these techniques by the supporters of law and order, by organizing and setting up the most sophisticated means of surveillance and tracking down what remains of strong heads who persist in denouncing the ignominy and the fundamental imbecility of the decision-makers and technocrats of all sides.

And it is necessary to salute, in passing, the tenacity, the courage, the devotion of those who, in spite of the ambient stench, the nauseating assaults and the calumnies maintained by a certain press, stand up, as much as they and they can, against the wall more and more opaque of a reality shaped and set up with only end to allow that, behind the deceptive decoration, the ransacking and exploitation of everything continues in an almost general indifference. It is that the spectacle - in the situationist sense of the term — as predicted by Guy Debord*, has reached a point of perfection such that effectively and very concretely, today « Men resemble their time more than their fathers ». Nevertheless, even if the struggle is unequal, even if the weapons are just as unequal, it is comforting to be able to read and hear these other voices, which, in the heavy shadow of the conventional discourse about everything that touches the essential, try to give the few keys — and they do exist! But we cannot insist enough on the insidious and perverse role that the dominant media play in the formation of the « air of the times », which has become more and more unbreathable and nauseating.

For all that, the policies carried out everywhere, whose inanity and brutality no longer need to be demonstrated, appear more and more to be what they are in the eyes of a growing number of people who are gathering, debating and demonstrating on the bangs of the constituted apparatuses, and this is an excellent thing, even if, for their part, the « masses » are still under the illusion of the function and the effective goals of the workers’ organizations, which have no other views and projects than in the poor framework of claims that are light years away from what it would be urgent and highly legitimate to defend and to fight for resolutely. One could not help but snicker and laugh at the announcement of the birth of a vague « front against austerity » made up of these grotesque left-wing figures, including an ex-prime minister who appears everywhere and gesticulates with a smile on his face, a head of a mutual insurance company and an ineffable trade union leader. This band of three, as ridiculous and funny as the gang of four of sinister memory demonstrates, if it were still necessary, the objective collusion of almost all the officially recognized formations and whose same purpose is nothing less than to curb any original and properly revolutionary form of protest. It is clear, here as elsewhere, that for these people, the dominant concern is to keep themselves warm in their little place, whatever the cost, against the winds and tides that threaten them. This remark applies, moreover, to the most emblematic figures of what remains of republicanism — crumbs, hardly — in our French neighbors where one could see, at the end of the last election, the fatal blindness and hypocrisy in which they are and will remain locked against all the evidence.

It is therefore not surprising, to return to the abyss, that, there as here, « the people » are more and more distant from politics as it is conducted and, at the same time, from those who still claim to be manage business in defiance of the most elementary morality. The only ones to be offended by this state of affairs are, of course, the editorialists and other plumbers guaranteed by the media-political system who whine, all column long, about the lack of seriousness of what they have left as readers. In truth, the gap that is created between the elites and the despised populations is waiting to be filled. How could it be, depending on or according to what circumstances, under the pressure of what forces are set in motion?

So many questions that are, of course, impossible to answer. « You can’t expect a few individuals to break the deadlock. The unblocking can only come from mass democratic movements, which are not legitimized by the possession of an intellectual privilege. » says Jacques Rancière in a recent interview, thus indirectly answering the questions that the many followers of Paul Jorion’s blog are asking and that we are also obliged to ask ourselves with lucidity.

Yes, the task is immense; and if we see some signs announcing future tremors, we must also have the courage to see that, perhaps, « Only a sufficient shockwave could divert humanity’s attention away from the daily, voracious routine in which it has allowed itself to be caught up. There is, unfortunately, no other solution in front of the magnitude of the task of reinformation which awaits us » according to one of the contributors to Paul Jorion’s blog. Nothing is assured, everything and its opposite can happen, let’s not give up!