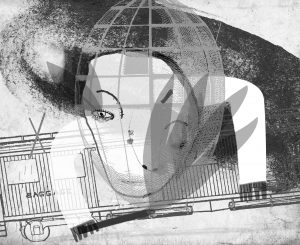 War does not bring together partners, but enemies. The social war, the class struggle, does not see the opposition of individuals mandated for a so-called social dialogue but of groups with diametrically antagonistic interests. On the one hand, the State, guarantor of the smooth running of society as it is and as it should remain, the world of employers and (good) business, and on the other hand, « the working masses » — workers, employees, civil servants, the unemployed — who are defending their livelihood and, above all, perhaps, their dignity. It is more than likely that the readers of our excellent paper will have had the opportunity to read about the recent events at Air France, where we have been able to judge the combativeness of the personnel and the rout of those who have the delicate mission of managing, in their own way, a company which, if I dare say so, has been a success, isfaltering in many respects; let’s skip the details of the many aspects of a rout that dares not speak its name. The images of these poor directors of human resources, fleeing from the angry workers, shirts in tatters and discomfited faces, have toured the hexagon through the offices of President Hollande and his Prime Minister who, neither one nor two, has qualified as the employees who had been singled out by the unanimous press and the political staff as a whole. With the exception of the courageous and lucid Jean-Luc Mélenchon who, with his usual loquaciousness, set the record straight by castigating those who give lessons in good manners (preferably with their foreheads lowered) who see nothing wrong with the harm done everywhere to the world of work in the name of the sacrosanct competitiveness of companies and the profits of their shareholders.

If our neighbors across the border in Belgium are experiencing what is called a serious social crisis and if the means to remedy it are more and more distant from the simple common sense or political courage of the people in power there, they will have the meagre consolation of noting that, in our country, this crisis is similarly acute and that, in the same way, our leaders only have as a recipe the frontal attacks against those who are paying the price, more and more, of a systematic dismantling and destruction of what, for a long time, was taken for granted in terms of social protection. The scandal and the fear that some people have caused — starting with the whole of the press resolutely at the orders of its constituents — the few « excesses » at the end of the imposing demonstration last October, the resolute and even very muscular pickets of the FGTB militants during the general strike in the Liège region a few days later, are only the response and the riposte of those who, perhaps, see no other way out of their fears and their distress than an anger and a hangups which must be considered as perfectly legitimate.

Now let’s get serious. That the actions of this day had, for some, regrettable and unfortunate consequences, we can only agree. As a result, a significant part of the public opinion has come to dislike the trade union apparatuses which have, in these circumstances, and especially in the case of the FGTB, lacked discernment in their assessment of the incidents that marked this day. This, of course, gave the leaders of the federal majority parties the opportunity to call for the most extreme measures to put an end to obstacles to people’s right to go to their place of work — or exploitation, as the case may be. It will therefore be a question, in one way or another, of trying to muzzle and, perhaps, even criminalize the most reprehensible actions since, already, the identity of some troublemakers has been transmitted to justice by the police. Or we see that the appreciation that we must be able to make of the way in which the strikes are carried out and their drifts must be resolutely critical; not as for the well-foundedness of the struggle but of the ways of carrying it out. For we should admit that, for example, forcing such companies, large or small businesses, to close their doors under the pressure and intimidation of determined groups is certainly not likely to attract the indulgence of an opinion that is permeable, alas, to the outrages of an unbridled press and commentators. In the same way, blocking roads, intersections and other public thoroughfares only hurts those who, all things considered, are in no way responsible for the decisions that are taken in high places. To antagonize people whose sympathy, or even support, you could just as easily gain by providing intelligible and well-founded information is not a good thing. Let us be clear: it is not a question of calling for moderation or abandoning a fight that everything justifies, quite the contrary. But the union leaderships, for their part, must not compromise themselves by accepting, on the pretext of realism, to negotiate from a position of weakness — and this just after the big demonstration and the strike in the Liège region — and toswallow a lot, and not the least, on the back of the militants put in front of the accomplished fact. One would come to wonder what use mass walks in the streets of the capital, strikes in small steps, whether or not they are followed with determination by a base that will perhaps end up alerting and demanding accounts from their leaders; that is, in any case, what one would come to wish.

In our countries, as everywhere else, the global landscape is becoming more and more dilapidated; and in an insidious way, almost underhand, by small touches. The decision-makers of all kinds, accomplices of the powerful and strictly at their orders, apply to the letter the directives which are dictated to them according to the whims and desires of their masters. The hushed cabinets where the leaders of the universal game meet and where everything is decided, have replaced the places where, naively, one could still believe that the sovereign people, through the voice of its representatives, still had the slightest influence on the course of things. From now on, freed from all hindrance, those who owe their place to our votes — woe to us! — and of which they did not take any account, hand on heart, do not finish lying, betraying, scoffing and disguising until the language with an only aim of making pass the most bitter pills to an anaesthetized opinion and paralyzed by the fear of tomorrows which will sing soon only for the few privileged ones that the system pampers and protects.

Here, as elsewhere, kept for the most part carefully away by the press, a few sweet dreamers -that’s how they are disqualified — try to make their anger known, put forward ideas, radically different paths to follow. But their time has not come; and let there be no illusion, it will not come. The spirit of profit, those who have made it a religion with imperative and indisputable dogmas, have already and irrevocably defeated.