THE ELECTRIC CAR, A SUSTAINABLE IMPOSTURE 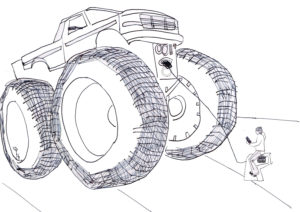 It would be the « solution », the one that would always allow us to postpone the indispensable reflection on our socio-economic model and the need to get out of it as soon as possible. It is the electric car which, in the name of ecology, would ensure the transition. The e‑car would be used mainly to put people to sleep and distract them, being anything but ecological, with batteries produced with minerals from a globalized exploitation, recharged by power stations. One would almost forget that they had to be produced to replace the old ones.

I have to come back to the electric issue, but this time about a current fad: the  » e‑car of the future « . In front of this wave of media promotion on the occasion of the Frankfurt Motor Show(1), it seems to me necessary to come back on this great illusion. I am quite surprised that the charismatic head of PSA-Opel himself, Carlos Tavares, expressed reservations about this choice at the opening of the show…

First of all, we must ask ourselves why the governments of the most industrialized countries, but also of « emerging » countries such as China, are pushing manufacturers to go down this road. The reasons given can be summed up in two words: particle pollution and CO2. The improvement of air quality is therefore a first argument and has the advantage of being also a promotional tool for politicians. Indeed, the use of electricity would have an obvious benefit in cities, where three quarters of the population in rich or emerging countries now live.

The governments are thus making a good show of their fight against global warming. Scandinavia parades in the lead with its good Lutheran conscience, Norway wants to abandon the combustion engine as early as 2025, Volvo in Sweden will produce only electric or hybrid engines in three years (in fact, morality is the daughter of necessity because Volvo is now Chinese, and China wants to move quickly in this direction because of the gigantic urban pollution) However, the problem of urban concentration is different from the ecological problem at the planetary level. And in this respect, this new technological trajectory has a much less sympathetic character, as we will see.

The classic answer that the media take for granted consists in putting forward the efficiency of this e‑motor on the ecological but also mechanical level, while neglecting the side effects. The electric transmission is, in fact, much more advantageous than the thermal option: 85 to 90% of the energy would be recovered, whereas in the thermal option the yields are only 25 to 35%. However, the calculation is biased, as it does not take into account line losses in supply and battery storage. Taking them into consideration, the efficiency is only 65–70%, which is, let’s face it, double that of thermal.

However, this answer would be insufficient to go around the question if it was not accompanied by the key conviction of modernity: the faith in an unlimited progress that should solve all the new problems generated by this choice of a new technological trajectory. Like these, all of which are considered to be solvable in the long run by technoscience:

- the weight of the battery, 250kg, whose charge still offers little autonomy, which explains why these vehicles are mainly used for urban travel;

- slow charging time: 10 hours on average. As long as you don’t let it discharge below a limit that would put it out of action;

- the electric vehicle is superior to the internal combustion engine in terms of CO2 emissions only after 100,000 km, because of the energy cost of manufacturing the battery and assembling the various high-tech components. This is the average mileage of urban travel in 10 years, and 10 years is the theoretical maximum life of the battery.

However, these are only minor data, often refuted by the promoters of electric power, which essentially concern the consumer, whereas the major disadvantages of the lithium-ion battery lie elsewhere.

These batteries, although considered recyclable, are only recyclable for a third of them, and require two main components: a relatively abundant alkaline metal for the moment, lithium, located in places hitherto protected from wild exploitation (in particular the salar of Uyuni in Bolivia, the salar del Hombre Muerto in Argentina and the western plateau of Garzê in Tibet — which also explains China’s interest in this country) and cobalt extracted under appalling conditions (20% manually, and often by children, at the bottom of holes several hundred meters deep) mainly in Congo-Katanga. Other conventional metal components, such as zinc, aluminum, copper, are present but also rare earths, these new elements (mainly lanthanides) whose fierce extraction participates more in the destruction of the environment.

Thus, from the beginning of the story, there is an ecological flaw because, in addition, lithium is obtained by evaporation of water in a solution: the salts are concentrated in a brine to release, by a chemical process, the lithium carbonate. Huge quantities are lost in this way. Highly acidic, they do not return to the water table, pollute the soil and cause a shortage of clean water, vital for the ancestral communities of these salty regions (as in Gazê, which is at an altitude of 3,800 meters).

Another very different socio-economic danger also appears, that of a « rebound effect ». For example, the improved efficiency of the internal combustion engine has led to the creation of new, heavy and powerful machines, such as SUVs and urban 4x4s, monsters that have no justification other than being status symbols (they weigh 1.5 to 2.5 tons, to move a 70kg human being who derives a feeling of power from them). But electric cars are in the same game. For example, the leading manufacturer Tesla has released a luxury product, the Tesla Model S, which weighs 2.3 tons and can travel 500km, but with a 700kg battery.

Finally, I come back to the essential: the energy vector. How can we supply non-polluting energy to a market that will be dominated by China, India and the United States (currently the leaders) in 2030, and which will have produced one billion vehicles by then? I therefore remind you of this obvious fact, which must be repeated over and over again in order to understand the true, almost metaphysical nature of the problem: an energy vector « transports » energy but is nothing in itself. At the base, there is therefore a « potential » to be transported, and there are of course photovoltaic and wind power or hydraulic power in renewable energy, but these sources, according to forecasts, will give insufficient flows to replace thermal (or nuclear) power plants and meet basic electrical needs, which are growing at the global level (especially with the ever more massive use of digital technologies) Moreover, the renewable share, mainly electrical in the world energy production, does not increase in percentage in the energy basket, despite all the fine speeches on the subject. So how do we deal with the massive arrival of a new consumer opportunity? The « vector » will simply transfer coal and oil pollution, or nuclear heat, from a rural site with low human density to the urban space with high density. The planet will gain nothing.

To make us swallow the fable that cars will be ecologically harmless thanks to the e‑motor is to make us believe in Santa Claus. And yet the certainties of the followers of the industrial religion are taken up in chorus by the media, and nobody realizes that the « queen » of electricity, without her fossil or atomic clothes, is naked. China, famous yesterday for its bicycle traffic jams, and India will soon have the largest car fleets; these countries have unfortunately taken over the Western worldview: the belief in a technological tomorrow that sings. The electric car is a textbook case of eco-friendly development fantasies.