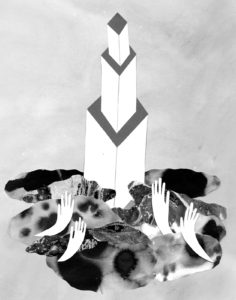 For the past few years, architectural stars have been designing « grand gestures » in Brussels and other Belgian cities… But how is this surge of (stock market?) listed architects a guarantee of intelligence, democracy, sustainability or quality?

Brussels has long been marked by a chaotic movement of demolition of its historic buildings. There was a time, not so long ago, when all major real estate projects were carried out by a few companies that systematically called upon the same architectural firms, which reproduced forms guided more by maximum profitability than by integration into the urban fabric. The situation was so caricatured that certain parts of the city, such as the European district, seem to have been the object of a concerted distribution between a few developers and architects with the blessing of the public authorities. The paroxysm of the ridiculous was reached at the end of the 80’s when it was decided, in the national interest, that the construction of the European Parliament had to be the work of a political and real estate consensus: to satisfy everyone and to compensate for the absence of a public project, a real estate company was created with banks of secular and Christian obedience, as well as an architectural workshop gathering the usual Brussels offices. Today, we can judge the result on the spot…

This mania for demolishing the city and this way of rebuilding it as an administrative and business center has led to an icy architecture, to a mortifying urbanism. Voices were raised against this policy of petty deals, including within the architectural profession, from which demands were made to open up this very closed game. Some of these eventually came to fruition as a new generation of architects and planners took office. Following the example of France, Brussels set up an Agency for Territorial Development and, inspired by Flanders, created a position of Master Architect. Devices that are supposed to guarantee a coherent vision, good architectural practices and the quality of the forms produced, even if these bodies depend directly on political power and do not question the major options taken in terms of program and assignments.

The use of international competitions was also presented as a way to ensure the quality of major projects. But in a country where the authorities are complacent about their inability to produce public architecture (the Berlaymont building site, with its years of delay and exploding costs, is always taken as an example in this regard), this type of procedure has relatively little impact.

Even if it does, it remains to be seen who defines this notion of quality and how…

In the absence of answers to these thorny questions, urban decision-makers seem to have tacitly agreed to adopt a practice that is widespread elsewhere and supposed to avoid mediocrity. It is a question of calling upon international architects, whose aura of guru is often the result of an early career marked by opposition to an opaque and technocratic system, whose reputation has been forged on intellectual reflection, a democratic, social and ecological discourse; on a progressive approach and commitment, advocating innovation, refusing uniformity and conformism; on an approach that goes beyond the strict framework of the architectural discipline by integrating cultural and artistic aspects. These are often prestigious public commissions (museums, institutes, cities, theaters, opera houses, courthouses,…) that have contributed to making them famous.

This is true of Jean Nouvel, known in particular for his involvement in the creation of the French Union of Architecture, an Architecture Biennial and the organization of counter-competitions for public projects. His multidisciplinary approach has led him to develop parallel activities, notably in scenography or design, by conceiving for example objects and packaging for rather chic consumer products. Formerly a defender of industrial heritage, Nouvel campaigned for the preservation of the former Renault factories on the Ile Séguin in Boulogne-Billancourt… where he is now planning to build a new piece of the city consisting of 5 towers, 4 of which will be offices. Once a critic of the Order of Architects and the barons of the profession, he is now at the head of an international company that builds skyscrapers, convention centers and hotels from Paris to Barcelona, from Abu Dhabi to Qatar, from New York to Tokyo, accommodating the desiderata of his clients (even if the specifications prevent any decent, socially and ecologically harmless project from the outset) and the not always democratic procedures that led to his own appointment.

« My credo is dialogue with the people and their culture, with the goal of pleasing them, » he says. But who are we trying to please? Nouvel was asked to build a 50 million euro tower for the police in Charleroi, but he will leave his mark in Brussels, where the SNCB has called on him to transform the Midi station into a vast 550-meter long complex, including 250,000 square meters of office space, a conference center and a panoramic restaurant flanked by a 120-meter high transparent building in the shape of a V. In a neighborhood that has already been largely demolished for 300,000 square meters of office space, this is certainly something that will make the residents happy.

It is high time to look for the way to a true public architecture, of general interest, which is taught, criticized, debated, and discussed.

As for the Spaniard Santiago Calatrava, he offered Liege, a city of 200,000 inhabitants, the largest TGV station in Europe at the end of a 9‑year construction project that saw construction costs explode (from 161 to 500 million euros, on the SNCB’s dime) and was the pretext for razing the neighboring blocks: « The cohabitation between the station and the district is no longer possible » declared the one who is now preparing to do it again in Mons. In 2001, it was his Dutch colleague Rem Koolhaas who came to the rescue of European institutions anxious to improve their image in Brussels: he advocated thinking in terms of acronyms and transforming the European flag into a bar code, as if it were a matter of selling the image of a brand. In 2008, it was the turn of the Frenchman Christian de Portzamparc to be summoned by the authorities to redesign the rue de la Loi in order to better satisfy the real estate appetite in a European district reaching saturation; in the wake of this, he is hired by a promoter to design 2 office towers in the same district, and 3 others with the same function near the Gare du Midi.

These self-proclaimed iconoclasts have thus perfectly integrated the market economy and relay the prevailing discourse, justifying the race for height and densification that the big cities are engaged in. The buildings or urban plans commissioned from them serve above all to erect « emblems of a new metropolitan impetus » as the mayor of Paris emphatically puts it. What is important is to symbolize the power of a company, a country, a region or a city that think of themselves as brands and want to express their dynamism and attractiveness through flashy buildings comparable to logos. Architectural superstars slavishly follow this marketing logic, which aims to transform cities into business and tourist capitals, and railway stations into ultra-modern cathedrals. In the institutional and media field, the mere mention of their name gives legitimacy and standing to titanic projects, as if their signature were enough to extinguish all debate and all critical thinking. But why should we trust them? Swimming like fish in the water of a real estate sector that condenses corruption, they have little interest in the needs of local populations and users. Bombarded with experts on cities they barely know, they have repeatedly shown how little they care about the urban, human and environmental consequences of their projects, their exorbitant construction and maintenance costs, their pseudo-sustainability, and even their sometimes shoddy finishing…

It is high time to look for the way to a true public architecture, of general interest, which is taught, criticized, debated, and discussed. The city is too important a business to be left in the hands of a handful of utilitarian-minded businessmen or a star system that produces formal exercises for glossy magazines and sells architecture as branding or advertising.