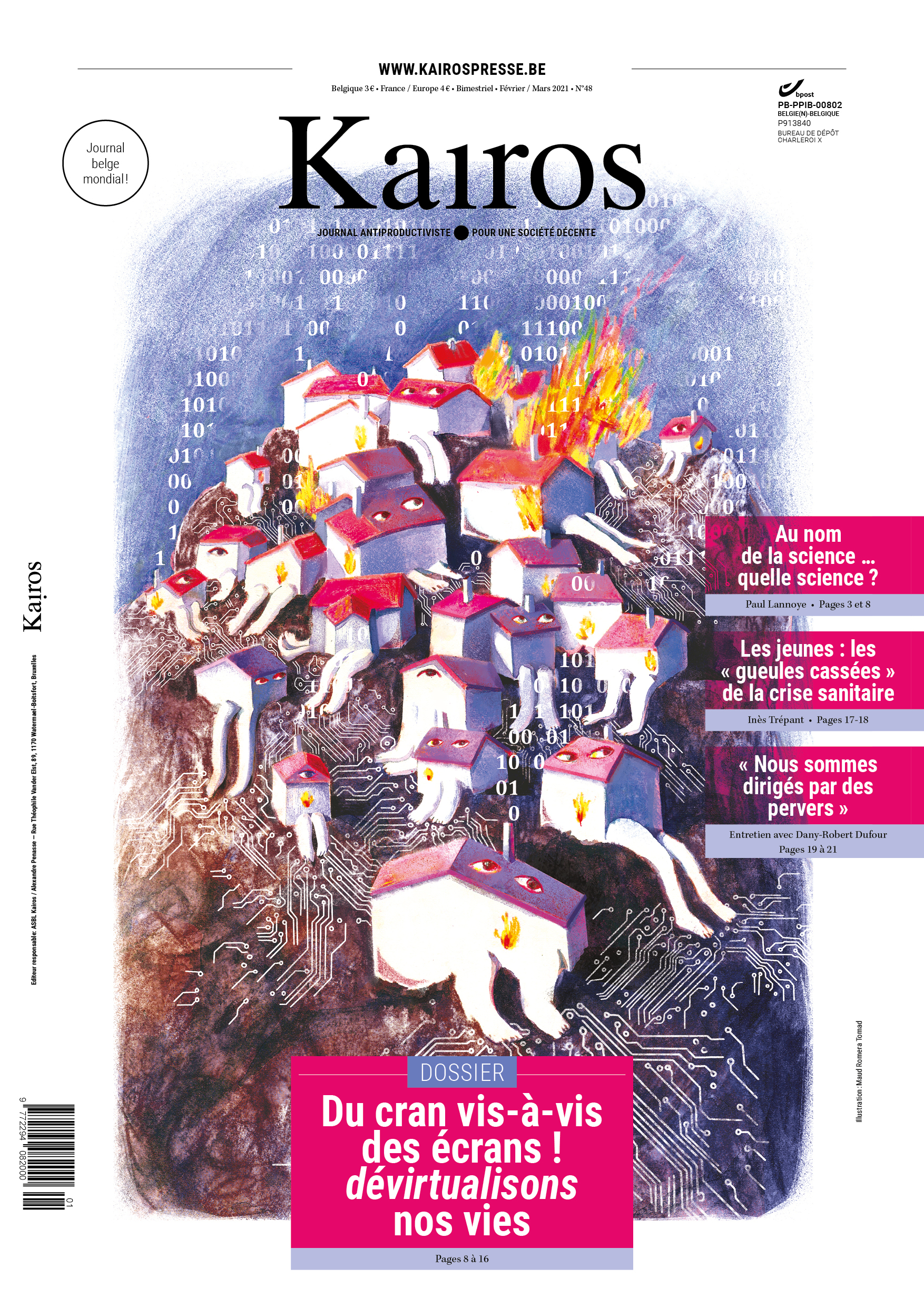 Totalitarianism is only fully expressed when it has unfolded its springs in a total way, that is to say when its premises have developed to the end. But its outcome is never the instantaneous result of a phenomenon and always depends on a context. Thus, firstly, we do not fall into totalitarianism overnight — which makes it very pernicious since we often do not realize it until it is too late — and secondly, the current and unprecedented political measures taken by almost all the governments of the planet would, in another context, have given rise to very different individual and social reactions. It is through a complex interaction between the actions of those who decide and the reactions — or lack thereof, which is ultimately also a reaction — of those who obey that a political order is established. The one cannot be separated from the other: if political decisions take shape in reality, it is because they are accepted.

Since the beginnings of the consumer society, a strange collusion has taken place between the designs of the political oligarchy and the aspirations of citizens. We have thus accepted that our lives are subject to an imperative that is contrary to common sense and morality: that of subordinating everything to money, in a profoundly unequal society where the subject most often supports his or her social position by the ever-renewed hope of obtaining more. The mass society has made us con-suming subjects accepting against the enjoyment of possession that our streets are scarred by advertisements, the radios and televisions reduced to commercial propaganda devices, the jobs more often than not devoid of any meaning, reduced then to salary providers that will allow us to adhere to the mass consumption, thus appeasing the frustrations induced by this emptiness. We like to call ourselves free, but  » to a large extent, we are governed, our minds are shaped, our tastes are formed, our ideas suggested by people we have never heard of. This is the logical consequence of the way our democratic society is organized « .(1)

Growth, growth, growth. Is this our destiny? La Boétie, who, reversing the usual litany « we can do nothing, they are too strong », reminded us that « tyrants are only standing because we are on our knees », gave all its power to the possibility of changing the course of history. This causal inversion — the reason for tyranny is no longer the strength of the tyrants, but the weakness of those who serve them (us) — is indeed profoundly realistic, and therefore hopeful. The awareness of our collective capacities to stop undergoing and acting on the course of our lives, however, implies that the society in which we are born is not perceived by us as something natural that cannot be changed, an intangible given. Now, this naturalization of the social (which is expressed in the « we can’t do anything, it’s just the way it is »), as if this social was not the result of choices, struggles, decisions, is deeply widespread.

But the context is there: having exchanged our freedom for an illusory security offered by the State under the condition that we accept its rules, among which the one in the first place to work and consume all one’s life, many of us no longer had the spirit and the strength to refuse. They are afraid of something else and prefer the worst that is served to them than the unknown of which they could be the architects; they prefer to be guided rather than to take charge of themselves. They have accepted junk food, polluted cities, stress and depression, pesticides, bull-shit jobs, misery alongside indecent wealth, why shouldn’t they accept to limit their life to a beating heart? We have already been so deprived of meaning, learned to die from our way of life, so why not accept that an unlived life is preferable to a whole life, free and fulfilled, but where we risk dying from covid — a very low probability if ever there was one? Paradox,  » because if one withdraws from the existence its properly human faculties or what makes us men to reclassify itself in an arch-poor and sanitary definition of the life, reduced to the simple physiological fact of living, then why strive to « save » it or to maintain it « whatever it costs »? « (2).

This meaning that we give to our lives, which depends on the lucidity of the view that we have of society, means that the intentions behind the criticisms against the absurd and iniquitous measures of the governments « against » covid-19, are multiple. There is the restaurant owner, the hairdresser, the barman who want, quite legitimately, to get their job back, « as before ». Others, however, want neither the Covidian dystopia nor the « world before », because they think that the first is only the continuity of the other: in both, information is privatized, the big economic groups, like the pharmaceutical multinationals, are the basis of political choices, the dominant ones are corrupt. We know that we are no longer in a democracy, that having accepted the oxymoron of representative democracy has already deprived it of all foundation.

Hope in a situation of despair can be great. The zeal of the authorities to force the population to take unjustified measures, their refusal of any contradictory debate, the police violence to muzzle the protest, the contempt of the politicians towards the citizens, the supposed « counter-powers »(3) which are only buffers to temper protest, the role of the mass media as a tool of fear, control and manufacturing of consent… All this can be used as a lever for an intelligent, constructed uprising, which will allow to apprehend that covid-19 is a global « crisis », in its medical sense:  » Moment of a disease characterized by an undergone change, and generally decisive, for good or for bad « .(4)

This world is sick, this period is decisive, it is up to us to want the change to go towards the good.