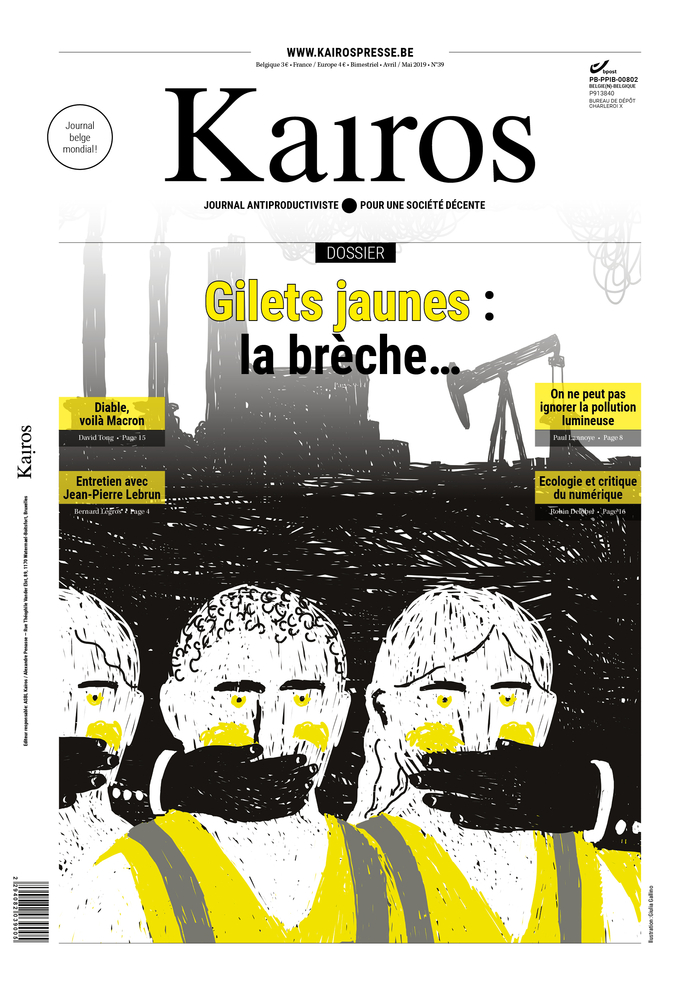 THE MORE REALITY DISAVOWS THEM, THE MORE THEY « DREAM

Justifying the horrors that have allowed the current state of this world they worship today, hiding the social misery and the perpetual drain on nature that they maintain, more and more, the heralds-heroes of this world made for them see however that their speeches and reality collide, which risks waking up consciences that could, who knows, take action. It is that between what they say and what the most lucid observe, a deep chasm forms. Their productivist utopia, a fantasy out of the ground, gradually came up against reality and they had to find a new myth that would allow them to regain strength and vigor.

This time it was the gleaming and glorious  » energy transition « , 5G and smart meters(1)This is the one that would allow the perpetuation of this unequal and destructive world while giving the illusion that it would still open up new opportunities. for all « , of which the myth of progress had made its leitmotiv, signing this time the  » happy ending  » of a  » authentic ecological society »: « We will probably live, if city dwellers choose to do so, in friendly vegetated cities, with permacultures on roofs and terraces, markets with local products, pedestrian walkways, clean air, bicycle paths everywhere, shared mobility, but these cities will be stuffed with electronics (sic) to run the vast artificial intelligence systems optimizing their functioning. « (2)

Yes, madness has taken over and is written in the pages of a daily newspaper, La Libre Belgique, owned by the Le Hodey family, 410The company is thethird largest Belgian fortune (€35,841,000) and also owns 100% of the shares of Traxxeo, a specialist in the Internet of Things in the construction sector, managing resources via new technologies that collect data and remotely control workers, machines, vehicles and equipment.(3). It would be hard to see these « heretics » who want to promote a harmonious society saying all the bad things they think about the digital world. The productivist terrorists, with their sick brains that no longer see the implausibility of what they are saying, persevere with the fable:  » The short circuit presupposes the long circuits of globalization. The collaborative economy resurrects conviviality and proximity but relies on digital platforms, servers, GPS, smartphones whose countless components are extracted and assembled in the four corners of the world « . Come on, let’s dig the kids out of the cobalt and cadmium mines, while here we’re doing short circuit work. In capitalism, no idea is lost or created, all are transformed. With the same totalitarian religion in the background: that of money and profit.

For their part, the political employees of the multinationals continue as before: the more they talk, the less they say; the more they promise, the more they disengage; the more they quote, the more they silence; the more they evoke the « citizen » welfare, the less they claim the common good; the more they say they help us understand, the more they prevent us from grasping; the more they explain that they take into account everyone’s opinions, the more they play into the hands of a predatory minority Their slogans sound like vast nets they cast to catch electoral fish. With fish stocks becoming increasingly scarce, they compete in the void:  » With the NCM, it is possible « ;  » Otherwise. Now « (cdH);  » Clearly more just  » (Défi);  » At the heart of change  » (Ecolo);  » A roof and a job for all  » (PS). Finally, today, in the face of social and ecological disaster:  » It is possible to do things differently, clearly being more just and at the heart of the change « .. Finally, by then, we are sure that some will have a job — even when they no longer have one — and a roof over their heads, when we know that, for example, Laurette Onkelinx (PS) will benefit from 458,448€ gross parliamentary exit allowance when she leaves the hemicycle. However, when Raoul Hedebouw asked to put these severance payments on the agenda, not a finger was raised in the assembly(4).  » Otherwise « ,  » change « ,  » just « , mean something else to them.

Duly noted. The more they talk about the climate, the less they will talk about life; the more they will point to individual responsibilities, the less they will let us see the determining collective responsibilities, those of a few hundred multinationals that perish everything, inscribing their end date on life. They will ask the gilets jaunes to pay more for their fuel to go to work far away while they will allow the firms to pay less to pollute more.

Curious then that for 7 years, despite multiple and varied authors, files, themes, investigations, our newspaper has never been approached by the media and political powers… Wouldn’t that be a proof of our integrity, because if we had set ourselves the sole objective of being recognized, it would have been to the detriment of our ideas, right? We would have started out as valiant knights, only to compromise ourselves little by little, forgetting the basics and no longer knowing what integrity is, becoming malleable beings according to our interests. Power is exhilarating, and nowadays it only takes a few weeks for the  » climate rebels  » lined up without flinching next to an array of bosses on the evening of the launch of Sign for my future, when the only option would have been to boycott their business as usual. The others, those who are outside the framework, cannot exist in the dominant media reality. It is up to you and us to make a voice heard that disturbs and challenges the established disorder.