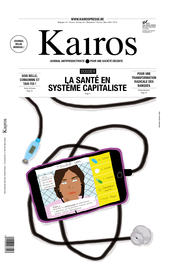 INTERSTICES, CONNECTED TO EACH OTHER

« The absurd arises from the confrontation between the human call and the unreasonable silence of the world.

Interstices, yes, interstices, that’s what it takes. Breaches, openings, that allow us to escape the daily spectacle, where a world is created that exists only because it is shown as such, insinuating to us that there would be no other, where the daily political and media homilies of a « return to growth » rub shoulders with the injunctions to competition and competition. This world of one against the other, of capitalist savagery, is already in agony, and it is because it is in agony that it is all the more formidable. If it already carried in its origins the inscription of the deluge and of the impossibility to realize oneself totally without annihilating men and destroying their vital space, in its current delirium it calls more than ever for a need of interstices where one can insinuate oneself, escape, vibrate, feel in one’s guts that if one is most often separated by the capitalist machinery, one can be together, that the scattered radical contestations can resound, and unite… at least we still try to believe it.

However, the gaps are not sufficient. They are useful, necessary, indispensable, but they lack one thing to really establish themselves in reality and ensure a real change in the course of things: to link up with each other. For an interstice alone is a tenuous gap between large spaces, while put together, these gaps, by communication alone, become themselves vast spaces that can rival what they were each fighting against: this absurd world and its perpetuation. Once connected in a spider’s web, what was only an interstice becomes a counter-power, a possibility of real change. This is what the appeal launched by Initiatives-Decroissantes « Soon it will be too late »(1) tries to do.

How to do it? Make a list of those who are willing to join together. Link them. Take action. A newspaper is for this reason a formidable tool of mediatization, no longer in its first sense of propagating and making known something, but in this very material aspect which by the propagation of ideas can concretize the meeting of what was made separate by the necessity of a productivist system which obligatorily needs that people ignore their capacity, together, to change things, and which must make them vibrate by the purchasing power to compensate for this loss of the meeting.

The world of theater is a wonderful example of a breeding ground for subversion(2). Some have been contacting us for some time. In their plays, they talk about the same thing as us, in a different way. Like us, they don’t make a show, but they tell us about the show they see every day, which makes them nauseous; like us, they open gaps in reality, they denounce the world we are made to live in, in which we also participate, and they sketch the one we could have. In the same way, the result of their works participates in this decolonization of our imagination. They show us that the ancients have something to tell us, that books grow on us; that those whom bourgeois thought has presented as rednecks had things to teach us and a sometimes profound reflection. They make visible what others have said before, they warn us that disasters elsewhere have taught us lessons that are hidden from us. That the apocalypse may be pending(3).

They create, resist, work. They live, against a system that wants to kill us, sells us death, shit…, and wind to make us forget the smell.
Let us unite with them. And with others.