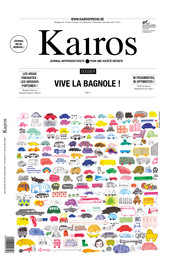 What do we really want?

« FN has almost 1,500 workers on its Belgian sites, in your opinion, what then, it should close? « (1), asked the journalist to the actor invited to present a play on the issue of arms production by the Belgian arms factory in Herstal. The list could be extended at will. Should we stop producing individual cars, stop commercial air transport? Can we continue to operate obsolete and therefore dangerous nuclear power plants, or build new ones? Should we accept to import consumer products made under indecent human and ecological conditions?

The answer to all these questions by the current « decision makers » is yes. However, what they cannot say is that the jobs of the workers of Herstal are worth more than the lives that will end with the weapons they produce; that the economic growth that is directly linked to that of the cars and our « mobility » is more important than health and the purity of the air; that distant vacations by plane, in territory conquered by capitalism, constitute indispensable needs that are higher on our scale of values than the destruction of ecosystems by the pollution of planes and the artificialization of all planetary places; that the answer is « yes », if we accept to take the risk of an apocalypse(2) that would follow a nuclear disaster, and that in all conscience we prefer to this risk the possibility to do as before, that is to say to overconsume; well, yes, if we accept that our cheap clothes are worth more than the lives of the Rana Plaza(3), which was anything but an accident.

If we choose to say no to all these questions, however, we will have to accept what that means. It won’t be easy, but it will be happier than if we close our eyes and say « yes ». For refusing this world will require that we collectively create the conditions for individual and collective change, on a local scale, imitated in multiple places. For the moment, the « yes » of continuity dominates in global actions, the « no » remaining a form of superego that we repress every day, a repression facilitated by the chimeras of the electric car, the solar plane, the media-political lie about the danger of power plants and the fears of blackout they organize, of the reassuring CSR (corporate social responsibility).

However, nothing will replace the energy yield of oil: there will be no electric cars that can perpetuate planetary colonization as the combustion car does today; no airplanes that can fly without massively polluting; no nuclear power plants without risks; no happy globalization where we would not balance wage stagnation in the North with overexploitation of the labor force in the South and destruction of their living space; no possibility of decent life in an environment where multinationals exist.

It is therefore a question of mourning. A mourning of the Western way of life which, far from being  » non-negotiable « , is above all not generalizable. The passage will therefore be quite painful, but doing it collectively will generate less fear. The common consciousness of tragedy, insufficient on its own, will be useful once it acts as a collective force, when a part of the people, realizing that it is the heart of the system and what it has done to us that must be attacked, will abandon the false fights, the palliatives that ensure the maintenance of the status quo. Awareness will lead to the will to avoid the worst, a kind of ferment around which the struggle can be organized, asking us to stop and ask for the ends we really want. It will only be for the better, the absurd and useless jobs forgotten, leaving behind the overconsumption and the boxes of antidepressants that made the untenable possible. And above all, let us never forget in our new preoccupations , that the afflictions of our way of life have afflicted the « South » for centuries, the period of devastating colonialism having given way to a neo-colonialism which, in many respects, seems worse(4). It would be a sign of egocentrism close to racism to forget that the damned of the earth did not start yesterday. We shudder because the wind now comes back to us…