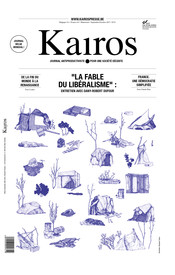 Our drop of water

It is more than tempting to say that all the things that happen in this world and that contribute together to a darker future, are inscribed in links of interdependence but respect some principles at the foundation of this pathological continuity. Among these, we will not cease to repeat the one that seems to us the most important: the subordination of life, of morals, of nature, of everything, to money. Thus, the genetic modification of seeds, plants, animals, the use of pesticides, the colonization of the planet by the car, mass tourism, nuclear power, wars, terrorism… always have very clear links with money and the desire to have more and more.

The looting and massacres of the New World were only the prelude to five centuries of Western atrocity. More than 500 years, therefore, have not only led to the material enrichment of Western countries to the detriment of others, but also, and this is much more spectacular, to the fact that these countries have succeeded in imposing on everyone the idea of a continuum in which all the nations of this planet would be represented, with the developed countries at the top of the list, those who master the representations of the world, and behind them, according to their position, the developing countries, the poor countries that are highly indebted, underdeveloped, etc. What a feat to have succeeded at the same time in ransacking the planet, destroying cultures, local economies, modes of agriculture, breeding, ancestral knowledge… while at the same time presenting itself as a great savior and promising the plundered peoples that they would be able to develop like the West, the very one that needed their flesh, their land and their blood to ensure its way of life,  » non-negotiable « .

This way of life of our liberal societies, En Marche !towards emptiness, nullity and destruction, which seeks to nibble away at all our autonomous capacities and make us totally dependent on the Market, like a God who will take charge of our relationships, our communications, our movements, our ability to situate ourselves in space and time, our leisure activities, our ways of reading, our food, the complete management of our homes… which will have reached its perfection when we will no longer know how to make a tomato sauce, a vinegar and bicarbonate cleaner, or read a book ourselves, and when we will substitute our indispensable needs for the needs created by the market.

What sphere of autonomy do we still have? What will the bankers, useless agioteurs, executives of all kinds and bureaucrats in suits who serve no purpose do when the system collapses? What will those who wasted their time serving them do? Who of them will know how to build a mill, repair a piece of furniture, cut wood, make bread, repair a bicycle, cultivate a vegetable garden? Shouldn’t we urgently unite, stand up against the destruction of what remains of our autonomy, name and publicize the great lie, the one maintained by this normalized schizophrenia, which would drive the healthiest person mad, where the architect of the Luxembourg tax haven presides over the European Commission, while his predecessor Barroso, having barely completed his mandate, joined Goldman Sachs, the firm that controls the markets, the giant octopus that contributes to the destruction of the world and of men.

If the « re-entry » is the period of a curious mixture between new big dreams and possible projects but also of despair and pessimism to note that all worsens without being able to act on the big causes, it is not necessary to see there defeatism but the desire still to toovercome despair, to find a collective force capable of turning things around. The spontaneous and increasingly numerous contacts of various collectives towards our newspaper, lets foresee a breach of convergence. Convergence that will only take place if the rapprochements are based on a common recognition of the necessity of the disappearance of the productivist system, which is quite content with small « alternatives » that do not attack it in its heart.

Kairos wants to be a drop of water that will participate in this. Waiting for a common torrent?