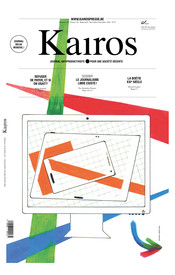 If by some miracle the capitalist mass media were to become free tomorrow, independent of the political and economic powers, the people could finally form a representation of the world based on reality, which could perhaps lead to major changes. And we think these changes could happen quickly.

However, this is something that is currently impossible, representing at the very least a putting of the cart before the horse, as they say. That is to say that everything should change before it can change, that money should no longer be in the hands of a minority that decides, that politicians should work for the common good and not for the renewal of their prebends, that profit should no longer be the leitmotiv of everything, but also that people should decide to turn away from the media that lies to them, distracts them from reality, hides the important things and pits people against each other, preventing their unity in a common struggle

It would be necessary to change everything before the media can change, but here we are in an aporia, a paradox, because it seems that without prior change of the media, without true information, change will come with difficulty.

But when do we hear a real speech, a public word that galvanizes us, makes us quiver, makes us feel part of a common life, making us feel that our individuality can have an importance for the whole, in a world where on the contrary the  » every man for himself  » instills the idea in our heads that « every man for himself anywayone more or one less in the struggle … »? Beyond what the political and media marketing lets us hear every day, that our individuality has meaning only for ourselves: purchasing power, voting, « consumer-actor », individual responsibility, eco-actions…

However, let’s not dream too much, the dominant media will not decide to start saying what is important for the majority, unless they believe in fairy tales and are capable of imagining that the richest families who own them have taken control of them following a large-scale psychoanalytical work where they were able to become aware that their wealth was indecent and that finally they were going to be able to say it via their televisions, newspapers, internet sites, radios…

Behind the mask of « real debate », of « freedom of expression », we are confronted every day with those situations where speech is censored, reality distorted, empty words, where one cannot express and say that everything « works » but in a great and total dysfunction. Thought, in this system, is dead, and those whose words are mediated are most often these peddlers of emptiness, these heralds of the status quo; these experts of empty words, empty sounds, of these litanies that are more attempts to convince than deep expressions of thought.

However,  » the democratic frankness differs from the fearful and submissive speech of the slave, it dares to introduce the risk of the inequality and the rupture of the passive unanimities « . This truthfulness, this parrêsia, also opposes  » to the speech of the flatterers « , he is the one who,  » incontrast to demagogues who only try to make the people hear the opinions that the latter take pleasure in listening to, take it upon themselves to proclaim unpleasant truths « , which is not  » a way of « saying everything » […] which would finally be the right recognized to all to say anything and everything, which is put forward as proof of the good democratic functioning(1) « . And this publicly expressed truth-telling only reaches its true democratic value if the one who allows it, the State in this case, accepts that what will be said contains the risk of introducing a modification into reality, a real change, which could be unfavorable to some.

However, this is not what we observe. The mediatized words are rather detached from those who pronounce them, the latter not being really involved in what they say, but rather busy with « communication ».