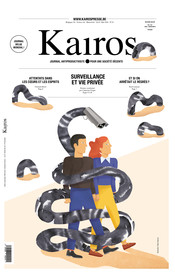 There is no guarantee that if we put an end to our Western arrogance of superiority, plunder and modern colonization, the terrorist acts that strike Europe will end. Whatever, decency would have us stop supporting the dictatorships of Africa and the Saudi dynasties that provide us with oil; stop immediately the bombings and the « collateral » devastation they produce; put an end to the exploitation, often by children, of gold, cobalt, cadmium mines.…, raw materials that end up in cell phones and batteries for electric cars or windmills; that we no longer make pacts with Israel, a segregationist state that enslaves the Palestinian people and respects almost no international convention.

Leaders will not act on these obvious recommendations. Refusing to question what the West is and what it has done to us, the worse it is, the more it will need an enemy; the more its values will be empty of meaning, absent from reality, the more it will evoke them. We will thus end up with this ordinary racism, this fear of the Other that is beginning, we see it more and more, and that will lead more easily to speak about the Other by generalization, prejudice and stereotypes. Where one allows oneself, one dares, to speak of « nationality disqualification », stating that « the will is to go towards the second or third generation « . (Didier Reynders, Minister of Foreign Affairs): the grandson of the worker who came to build our metro tracks will have to behave, otherwise he will have to return to Morocco, the place where his grandfather left… grandfather.

What is the impact of this political will on the young people who could be the potential objects of it, they who already knew that they were, for the power and a part of the « Belgian » population, only second-class citizens? They, struck by this state racism and structural inequality, whose excesses were dealt with by incarceration(1).

The more the reality of this world that we wanted to « develop » in our image, having sold this delirious idea that everyone could do as « us », the more the exploitation on which it rests is revealed, the indefectible link between wealth and poverty, the fact that the latter cannot be eradicated without attacking the former head-on; the more the one whose forces decline, the more it wants to make believe in its vigor, displaying its muscles shapely by the anabolic drugs of the feigned unity, attacking the other, creating the « useful enemy ».

The closer the sedition comes, the more the power wants to make believe in our unity. Paradoxically, for its survival, it needs to be attacked. The « enemy » offensive in fact gave power a strength that it no longer had the capacity to generate itself. By denying the evil in which it participates, a denial that is achieved in particular by reducing the terrorist act to an attack on « our » freedoms, it generates a discourse in which, implicitly, everything that is not « us » is not free. The « monsters » perpetuate the existence of this freedom of facade. It needs them.

On its side, the media-political enterprise does not extract us from the « action », leaving us entangled, silted up in the emotion from which it profits to sell its products (commercial for the one, political-ideological for the other). It does not emerge from the categorizing production provoked by the attack, where « we », « united » in the struggle, are faced with « them »,… The deeply pathetic and consensual media productions offer formal proof of this:

« After the anger and sadness, the time has come for me to apologize to you. To ask for your forgiveness (…) I sold you this world as one of possibilities, of the great journey [qui voyage?], of these spaces that you were going to be able to survey, of these peoples that you were going to meet. I, who had flown for the first time at 15, who had seen America at 22, who had learned English along the way and Dutch when I needed to. I was sure that we had spared you the war [Afghanistan, Iraq, Libya, Syria…], putting it in the history books. We were so sure that we had buried them, the demons that had made the concentration camps [Guantanamo, the CIA’s secret prisons, the modern « mouroirs » that are our prisons?], genocides [Rwanda, Boko-Haram?], napalm [les bombes à uranium appauvri dont les restes continuent à tuer les Irakiens?], the gulag[the one in the cities, in which the people left behind by globalization are parked?

The words, on the front page of a mass media, characteristically denote a form of magical thinking about the world, which therefore corresponds to what one hopes it will be and not to what it is. Because who is this message addressed to, posted on a mass media and seen by tens of thousands of people? What percentage of the world’s population travels extensively, goes on Erasmus, discovers the United States at age 22? What portion is protected from wars, genocides, effects of western bombs? The impression of being sheltered in an ideological bubble, of this world that the bourgeois good-will, under its philanthropic works and its « development », was persuaded to be able to draw everywhere with its image, made forget that « our » way of life — that of the false « us » — and that, on the contrary, it is the ideology of the Western way of life that needs misery, here or there.

Thus, little by little, the soil of totalitarianism is sown, where unity imposes silence, no longer tolerating the discordance that alone threatens to denounce the deception of « us ». This « we » is the one in the trenches, which leads the poor man who identifies with the nation to go and fight for big business. This reminds us of the song of Craone, an anti-militarist pamphlet of the first world war:

Those who have the money will come back,

Because it is for them that we die.

But it is finished, because the trouffions

Will all go on strike.

To go up on the plateau,

Because if you want war,

Pay it with your skin!

This injunction to « us » is, behind the mask of altruism, the worst thing that can happen to us, because, as has already been said, it erases the distinctions within the group, for example the abysmal differences in wealth between Belgians, and directly generates the existence of an Other outside one’s group and theoretical racism, followed inevitably by acts of violence. It prevents, by refusing introspection and the inventory of our historical responsibilities, to perceive that « our » values are in fact divided into two sets, one of which has the function of hiding the other:

- the values-images, those of« freedom »,« democracy »,« sharing » and« multiculturalism », « which have been attacked », as we find them in most of the editorials following the attacks;

- share values (which are reality) that are not recognized as values and are camouflaged behind the values-images that they paradoxically allow to perpetuate: social dualisation, the arms industry, complicity with rogue states, wars, structurally organized misery, competition and competition, hunger here and famine there…

Protecting the population from a danger impossible to eradicate by only pursuing it, will not be done by putting the army in our streets but by not feeding the « hatred of the West », fed here and there. It is therefore a question of creating the conditions for a decent society and true humanity to prevent the intention of destroying the other from being born, unless, as we have shown, there are more important benefits to be had from the endless pursuit of terrorism…

This will be done by acting in different ways, each of which is more or less linked to the monotheistic religion that rules us all, that of the god money. Perhaps starting with :

- to get out little by little of our dependence on oil, which can only generate wars, pollution and inequalities;

- stop — and the first point will make this one much easier — our collaborations with states that promote terrorism and destructive extractivism in various ways;

- be involved in a decent way in the resolution of conflicts, especially those with global identity resonances, such as the one suffered by the Palestinians;

- to put an end to the plundering of the « South » (which will only happen if we fundamentally change our way of life and leave the production-consumption cycle).

It is perhaps easy to be a prophet since the future, which by definition we do not know, is open to infinite interpretations, but it seems obvious that without a political resumption of life, and therefore of a true participative democracy which relegates our politicians to the dustbin and takes in hand what is essential, the risks to come for humanity will be unprecedented. For the moment, « our » government is thinking more of buying, for 15 billion euros, 34 fighter planes to go bomb Iraq and Syria3. Bombings that will participate in the massacre of innocent people and will undoubtedly have their collateral effects here.

Only then will it be possible to talk about « us ». A diverse but coherent « we ».