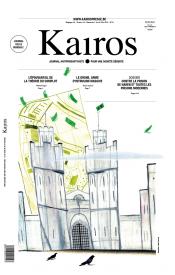 « THERE ARE NO ALTERNATIVES, YOU HEAR! »

The no-transat platform and the D19-20 alliance have done a great deal to raise awareness in Belgium of CETA and TTIP(1) and their inherent democratic harmfulness, but let’s not kid ourselves: too many people are still unaware of their very existence. Those who would have the opportunity to mediate information and « make what is important interesting » are therefore in the hot seat. On Friday, April 17, the day before a demonstration against the Transatlantic Treaty, the RTBF’s 7:30 p.m. newscast devoted 3 minutes 7 seconds to the TTIP in the 6th subject. Next to that, the journalist talked for 3 minutes and 23 seconds about the bicentenary of the battle of Waterloo. And how much time did they spend in the days, weeks and months before to make us understand the real issues of these treaties?

Isn’t this a bias of a public channel that is increasingly subject to the diktat of ratings, the yoke of the advertising department and managerial thinking? In the first issue of Kairos(2), we quoted a journalist who saw RTBF becoming a kind of « ministry of entertainment ». Pleasing advertisers is the editorial line of the media, as explained by the RTBF advertising department: « the advantage of radio is that it reaches identified target groups at the right time, whose listening motivations are clear ».

In this context, is it any wonder that they try daily to make us accept the pill of austerity and the necessary sacrifices, without ever naming those who are not sacrificed. Under their false neutrality, they are formidable opinion makers.

Example? Extract from a TV news, where the Vice-president of Inter-Environment-Brussels (IEB) was invited to answer questions concerning the 50% reduction of its subsidies(3):

Journalist (Nathalie Maleux): An association which raises the tone, it is Inter-Environment-Brussels. Like other ASBLs, due to austerity, it has been deprived of part of its subsidies. Its co-president, Marco Schmitt, is our guest. Hello. So the cabinet of your minister of supervision deprives you of 50% of your subsidies, roughly, if I believe your figures, we go from 160,000 to 80,000 euros per year: this is not enough for you to do the work you do now?

Marco Schmitt: Certainly not (…) it represents for the moment roughly 10% of our budget envelope, so it also represents 10% of our payroll.

Journalist: but you agree that everyone must make an effort, precisely with this budgetary rigor that is required (sic)!

MS: « Everyone has to make an effort », that’s what we were told with 15% that would be applied to all Brussels NPOs…

The journalist, cutting off M.S.: You would have displeased your minister?

M.S.: To the government perhaps in general, to the minister in particular (…)

Journalist: So you, you talk about positions that would have been displeasing, we would try to muzzle you a little by reducing the subsidies. We obviously called Céline Frémault’s office. She says that it’s not at all for that (sic), it’s because you haven’t reached your objectives in terms of the environment. For an association which bears this name, Inter-Environment-Brussels, it is a little bit stain.

Journalist: … biodiversity, nature in the city… that’s what the minister says.

M.S.: That’s one thing. It is clear that in a city, environmental issues go far beyond this kind of problem, since…

Journalist, cutting MS: So you agree that at that level, you may not have achieved all the objectives that were asked of you, you expanded your missions too much?

M.S.: We have expanded our missions as we have always done, let’s say it’s rather the opposite that hashappened…

Journalist, cutting him off: But when your minister asks you to target this particular mission and you don’t… she cuts off funding...

Journalist, cutting him off: It’ s your minister who needs to be convinced then!

Budgetary rigor imposed by nature, deserved punishment, organized compartmentalization to avoid questioning the causes. The mass is said. The unbelievers who doubt, who see that some people are still getting rich and are not « making a necessary effort », who think that something is wrong, can just sit down, turn on the TV and… shut the fuck up.