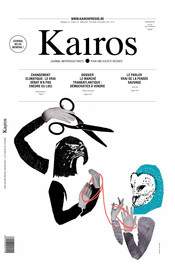 SOCCER, A SPECTACLE OF SOCIAL MALAISE

We should no longer be surprised by all that this world, which has elevated greed to an absolute value, is capable of offering us. Everything that pays is good: death, the waste that this system creates and reproduces, wars, speculation on all sorts of « values », even if they deprive a majority of people from eating their fill, … We should not be surprised anymore, but each time, pushed further by the spirit of profit, the creations of this company do not finish surprising us.

So everything must pay off. And it works. The game, this « purely free physical or mental activity, which has, in the consciousness of the person who indulges in it, no other purpose than the pleasure it gives »(Le Petit Robert), which has become a spectacle, has nothing to do with play. After the soccer clubs listed on the stock exchange, players and clubs « bought » by Qatar, the match-fixing scandal, should we be surprised that Fantex, « the first platform that allows you to buy and sell shares linked to the performance of a brand (sic) pro athlete », has just proposed to list an American soccer player? Once the surprise is over, the only question that remains is not what else will be invented to satisfy shareholder greed, but where will it end?

Not so fast, judging by the craze for modern sports entertainment? 45,000 fans in and around the stands, and more than two million in front of their TV sets, for the Red Devils game on October 15. Thousands amassed on the squares of the big cities, relayed by the media in their exhibitionist frenzy. When can we expect such a crowd for an anti-nuclear demonstration, or support for Afghans deported and treated like dogs by the police? The soccer show will have succeeded better than anything else in this impossible challenge of linking atomized individuals, of untying in the name of the link. To unite in order to better separate . In modern games where we « watch what happens without being involved ».

The spectacle of soccer, which is nothing else, whether we like it or not, than a necessary entertainment of the consumerist hedonism — that those who are taken by this « passion » must recognize — feeds the needs of an illusory unity, whose other side is only rejection and ostracism. — feeds the needs of an illusory unity, the other side of which is only rejection and ostracism. Starification by the media, and then the people, of footballers earning in a few minutes what their spectators earn in a few hours, days, years, which creates adulation before which « we are all equal ». In this case, there is nothing to hope for in terms of social justice.

In order to criticize it, it is too easy however to take the path of contempt, even if in front of mediocrity and loss of critical spirit we sometimes fall more than usual in this way by which we categorize and freeze the individual who would have only made a « choice », for which he is from then on only responsible; but it is also too easy to see in it only a passive victim of a system with an irredeemable determinism. The truth is probably somewhere in between.
We cannot therefore resolve to see in it only a « crowd effect », a logical result of what « the people » would have asked for, in any case, but rather the joint effect of deleterious and harmful media structures, of professional politicians who have nothing to propose but always the same offered and turned under other forms that hide the same background, and of depoliticized subjects in search of a collective, quicker to throw themselves into easily accessible expedients?

Who, however, will only find promising ways in the modern show. Even if it is « Belgian ».