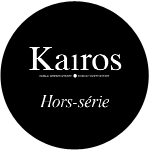 Kairos, an anti-productivist journal for a decent society, has been publishing a bimonthly since April 2012 that attempts to offer free information, far from a daily media spectacle that leaves us no room for thought or action, and thus postpones change always until tomorrow. Working on the making of a reality far from the observations that a really informed mind makes, these media literally suffocate us under the weight of a reality they like. As Alain Accardo says,  » The media representation of the world, as it is manufactured daily by journalists, does not show what reality actually is but what the ruling and possessing classes believe it is, wish it to be or fear it will become « (1). It is not nothing, few realize it enough, but the mass media, whether private or public, have something totalitarian about them, holding nothing less than the monopoly of the representation of the world. They are an indispensable instrument for power and its maintenance and participate in the privatization of the debate, leaving the answer to politicians and captains of industry. Yet,  » As with most questions, the answer lies with the citizens, with their action. Without a doubt, any system of power will do everything to prevent it « (2), reminded us of Chomsky and Edwards. The book you are holding in your hands is a continuation of the special issues we have been producing since the beginning: Peasant Alert (2013), School, beyond appearances (2014), The Terrorist West (2016). Agriculture, education, western imperialism, so many essential subjects that we had to treat differently. For this special issue, which takes the form of a book, we wanted to look at themes that, in a few years, have taken on major importance and risk being among the essential battles to be fought in the future. Reaching certain limits in the exploitation of soils, animals, plants and people, productivism has moved the limits into the realm of technological capitalism, the retention of our private data, the spying on our lives in order to better intertwine our needs and desires with its production. It has also folded and plunged into our own bodies, linking in a paroxysmal demiurgic fantasy, man and machine, with the aim of making us transhuman. Refusing also to follow the most reasonable and decent teaching that we should follow, namely that of drastically reducing our production and consumption « in the West », he seeks, scans, experiments by all means the perpetuation of nuclear power, at the risk of our disappearance. Finally, destroying what founds our differences and makes society, this pernicious ideology that the difference of the sexes would be discriminatory and obsolete is spreading, to the great profit of the procreation industry. The refusal of any idea of limit which animates our societies induces the use of increasingly complex technologies which make lose any autonomy to the human beings and move away them from their true nature.
Certainly, we are there, at the moment when it is easier to imagine the end of humanity than the end of capitalism. The gradual acceptance of connected solitude rather than disconnected relationships is a powerful contributor. We reach the heights of unlimitedness. Without a quick tilt, the fall will be very violent. In other words, tilt to avoid falling.