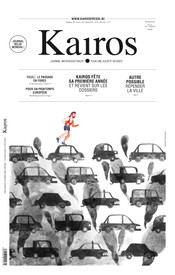 Far from the astonishment of politicians and their media acolytes, who pretend to discover with the « Cazuhac affair » that political interests and private interests are most often confused, others are stubbornly busy making us pass bladders for lanterns.

Thus Bayer and Syngenta, two behemoths of the agrochemical and pharmaceutical industries, which, faced with the massive and worrying disappearance of bees, « proposed today an action plan to unblock the situation in which the European Union finds itself ». These same two companies, one German and the other Swiss, produce phytosanitary products, therefore pesticides not to be named, including neonicotinoids which have a proven effect on the disappearance of bees.

John Atkin,Syngenta’s Chief OperatingOfficer, assures us that the deal  » Pollinator will provide valuable insights into bee health, while a restriction on neonicotinoids will not solve the problem. Banning these products will not save a single hive and it is high time that we focus on the real causes of the problem of declining bee populations. This plan is based on our confidence in the safety of our products and our historical commitment to improving the environment for bees(1).  »

» Absurd « you may say! No, logic! Logic of a system that has always devoted itself to present us the show without ever letting us see… its backstage. It was therefore necessary to do « as if » to continue to do « as before ». To create communication and advertising companies, to infiltrate the main media, to place a few thousand lobbyists in Brussels, to meet in the same places as those frequented by politicians, captains of industry and press professionals.

You can’t change the « direction » of history like you can’t stop progress! NEO is a 70,000 m² shopping center, while City 2, located 5.8 km away, is 51,000 m². But we are not in the domain of doubt, but of necessity:  » the area of the North of Brussels presents a significant deficit in commercial surfaces compared to the Belgian average, and even more compared to the European average « . Moreover, according to Professor Grimaud (geography-urban sociology ULB)  » Brussels could accommodate an additional 233,000 m² to simply reach the average of the large Belgian cities(3) ». Come on, if that’s the way it is, let the shopping malls grow like trees and flowers, since this is all about sustainable development.

Meanwhile, Kairos celebrates with this issue one year of existence and proves, more than ever, that it is not the time to give up.