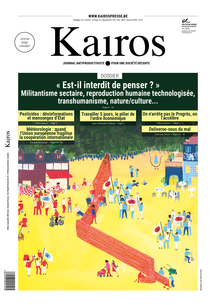 We are protected as long as we serve those who protect us. This service rendered in exchange for our participation in the great democratic farce is generally not very conscious. As Rosa Luxemburg well understood,  » those who do not move do not feel their chains « . And what is very subtle is that in this game, the media system constantly offers the staging of respectable movements that would « reverse the logic » … But the very principle that they talk about them without condemning them indicates that the gesticulations of these groups are without danger for the power in place. The others, who do not respect the framework within which they are forced to think and act, will feel their chains when the repression and ferocity of the state falls upon them. But the majority remains in an apathy where they can live with anything as long as they keep their « lifestyle », that is to say a job (most of the time not very rewarding), access to consumption, this famous purchasing power that they exchange most of the time with the freedom to think and to act, that they are allowed to go on vacations, to buy their car; but also to demonstrate between a point A and a point B chosen by « the forces of order », to unionize, in short, to do what it is necessary to do in order not to be bothered.

The media are essential to maintaining this situation, because they are the ones who provide the spectacle. It is amazing to walk around at the end of the day and, looking inside the houses, to see that most of the people are riveted in front of a television set, this one necessarily acting on some to divert some vellenesses that could have seen them ending up in another type of set. We know that on average a 7 year old child will have spent 1 year awake in front of screens. From now on, they block the real life, in a nomadic and constant way, following the subject in his external and intimate life. Jim Morrison said that  » he who controls the media controls the minds « . He had understood this well, while Edward Bernays, who is considered to be the father of « public relations », and therefore of propaganda, was already asking himself at the beginning of the 20th centuryth century:  » if we could understand the mechanism and the springs of the collective mentality, could we not control the masses and mobilize them at will without them realizing it? (1).

The conscious, intelligent manipulation of the opinions and organized habits of the masses, » said Edward Bernays, plays an important role in a democratic society. Those who manifest this imperceptible social mechanism form an invisible government that really runs the country « (2). The media, as a proxy for politicians, provide the mechanism, building the framework that delimits actions and thought. Their unquestionable basic principle is that  » we are in a democracy « , while the full psalm is that  » we are in a democracy, as long as we do not question the democratic limits dictated by the political-financial power « . If the people do not decide on the framework, we are not in a democracy. And if, however, many still think they are in this type of political system, it is because of what we have said above, because if they « move », they do so within the strict limits dictated by the power. Few, by putting their ballot in the ballot box, have previously ratified the future acts of the elected officials, whether it is obviously for all the illegal actions undertaken by the latter, as well as those « authorized » but completely illegitimate that they will take (all these large harmful and imposed projects).

According to the metaphor of the frog, which perceives too late that it has been plunged into a pot of warm and pleasant water, now boiling, when it is too late to get out, we gradually get used to an atmosphere that if it had been given to us overnight, we would be unbearable. And they want to make us incapable of thinking about the world together, the media spectacle replacing reality. The conspiracy theory, massively mediatized in the last years, has provided the formidable weapon to stop any discussion and prevent the exit of the framework. After the Godwin point, we had the « conspiracy theory point ». But no one, or few, have looked into the « conspiracy theory ». This allows us to understand that the former was used to maintain the illusion that the people decide, while the main choices are made in the boards of directors of multinationals and dinners involving businessmen and politicians; not to think about the mafia-like functioning of our States and the way it was gangrened by a logic of self-interest; to create enemies to our democracies, generating a false unanimity and an illusory « national feeling » («  we are all… »), obscuring an iniquitous class system.

Adding to the joker of the conspiracy theory the concept of « disinformation », we had in hand the weapons of mass destruction of thought. Again, Guy Debord had perfectly understood it, when he wrote, the disinformation  » It is all that is obscure and would risk wanting to oppose the extraordinary happiness from which this company, it is well known, makes benefit those who trusted it; happiness which would not know how to be paid too much by various risks or insignificant setbacks. And all those who see this happiness in the show admit that there is no need to skimp on its cost; while the others misinform.  »  » The confusionist concept of disinformation is put in the spotlight to instantly refute, by the mere sound of its name, any criticism that the various agencies of the silence organization would not have been enough to remove. « In short, for show, misinformation, » that’s all that can be said and that he won’t like « (3).

The litany of « scandals » is no longer even capable of denting the structure and slowing down its development. On the contrary, one could believe that their revelations accompany the progression of illicit activities, which will become with time new « scandals ». This gives « to think that it is the revolt, the taste of the freedom, that is a factor of knowledge, rather than the opposite  » (Jaime Semprun). Is this taste getting lost? We fear it. But we are still hoping for a breakthrough.