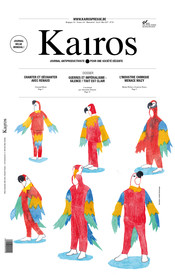 Populism » in the media, between scarecrow and cash cow

Nowadays, it is easy to regain an ethical-political virginity or to consolidate one’s good reputation as a democrat; it is enough to shoot red (blue?) bullets at « populism »(1)This is an exercise in which the media excel, confirming more than ever their role as watchdogs. Designating the camp of Evil and, by opposition, positioning oneself in the camp of Good, is a recipe for success. To make the populist puppet dance in order to make the capitalist nomenklatura sympathetic or acceptable, in spite of its malpractices (the Penelope Fillon affair in France, the Chodiev and Publifin affairs in Belgium), here is a trick that would be effective. On France-Inter on March 2, 2017, Frédéric Beigbeder imagined the Hexagone under the control of Marine Le Pen and took the opportunity to rub salt in the wound of the members of his caste,  » those whom the populists tax as bobos droits-de-l’hommistes  » (sic). And another ladle of left-wing liberal morality!

« The editorial by Béatrice Delvaux in Le Soir of March1, « Populiste, dis-nous ce que tu vas faire et qui tu fréquentes » (Populist, tell us what you are going to do and who you are seeing) exudes ideological blindness, unless it is cynicism. Selected excerpts and comments:

-At home(2) shows the foundations of a program that manipulates feelings and engages distraught people, re-examines a well-tried communication and marketing company . This « program » described here is strangely similar to that of… neoliberalism. But B. Delvaux does not « see » this.

-  » Once elected, nothing can, in their eyes, stop them ‚ » warns B. Delvaux when talking about Trump, Le Pen and Wilders. Examples of honourable representatives of democratic parties (sic) who show tendencies towards Caesarism are not rare, from Nicolas Sarkozy in the past to Recep Tayyip Erdogan today. Not to mention never-elected chief executives, like Mario Monti, a Goldman Sachs bank consultant who ran Italy from 2011 to 2013, to bring the people back into line.

-  » When populists are in power, democracy changes its nature and the majority becomes a totalitarianism of popular right. No need to wait for the populists for democracy to « change its nature ». It has long since changed its nature to become what Raffaele Simone calls a low-intensity democracy, where high electoral abstentionism leads the minority to designate the majority(3). And this is not contradictory with the tyranny of the majority, a total social fact already recounted by Tocqueville in 1835 in De la démocratie en Amérique.

All things considered, Beatrice Delvaux’s prose is like a missed act. Much of what she criticizes prospectively as (right-wing) populism is in fact characteristic of the existing system that she defends tooth and nail in her editorials. It would have been enough for him to change just two or three terms by others to make everything clear. We’re here to help!

Finally, a clarification, because you never know: At Kairos we hate the extreme right and do not want to see it come to power. But there is no reason to cling, with enthusiasm or with the energy of despair, to « our » liberal market democracy, which has entered its terminal phase. The equation is simple: no MacWorld, no jihad, no neo-fascism. It is both simple to see and very complicated to implement.