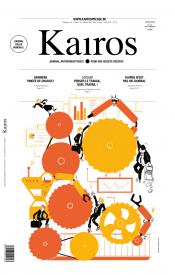 It is only when the state of stupefaction has been reached that the stupefied, previously peacefully confident in the future of our society, and thus of their own future and that of their descendants, will understand that what most of them knew unconsciously, turns out to be true. Because it is obvious that our world as it is, that the political councillors tacitly support or condemn in a harmless gesture one of these superficial demonstrations, cannot last any longer. The mass media try to persuade us otherwise, still describe the jousts and antics of the puppets, without having yet understood that it is necessary — should have been — to get out of the ring… that there is nothing more to see in the arena, only the spectacle of modern wrestlers — who do not take any risk, but take with them the future of humanity.

For decades, the struggles have engaged those who fight in a grueling attempt to prevent further « setbacks » on the social advances obtained, while the meager safeguards make us forget that during the struggle, the enemy was already preparing our future battles. Those who say that the « thirties » were nevertheless « glorious » forget two things: the oppressed non-Western peoples, re-colonized just after their « liberation », and the illusion of energy, cheap and abundant at the time.

Playtime is over. If the coming disasters seem unmistakable, if some predict that « the extinction of the human race in the short term is inevitable »(1)It is important to remember that disasters have been prepared for decades in the remote and intimate corners that public professionals do not like to talk about: in a classroom, in Molenbeek, La Louvière or elsewhere, where the values of citizenship are preached, but which practice contradicts every day(2). Come and see these schools where we train « free, responsible citizens, open to the world and its cultural diversity », where « wedevelops the taste of pupils and students to search for the truth with a constant intellectual honesty, all of rigor, objectivity, rationality and tolerance », and where we « Welcomes every student without discrimination »… in « affirmative action schools! »(3). Vast lies! The modern school prepares the child to compete and be competitive, ready to sell himself in the job market. Comparing, judging and gauging him, always, against his neighbor… rating him when he learns to read! In the modern school, « they were never given the opportunity to realize that they were good at something »(4). I see her, the little one, start to cry, deeply, in my office, when I evoke her first encounters with the written word, telling me that she is stupid. Broken, by a system that had not wanted to see all that she could do. For life? Come and see the cells where the prisoner experiences the conditions of sub-humanity; the interviews of humiliated unemployed people at the Onem, the workplaces where suicides, burn-out, stress and competitiveness mix in a magma from which the insane arises… .

So shut up! More and more politicians and journalists are fed up with your empty speeches that the facts contradict: they see what happens far from the cameras, live what you don’t say, feel what you keep quiet. Democracy sounds like a sales pitch to you, this « democracy » that we will not have to talk about when it is fully alive. If it is true that decades of mind-numbing advertising and consumerism have anaesthetized the brains, what can we know about « the people » and their reaction to the TTIP, the iniquitous tax system, the programmed destruction of nature, inequalities, nuclear power, the airwaves … if he had been enlightened by media that gave space to contradictory debates, didactic programs, positions that would have made him aware of the issues? Not one hour a day, no! Not a show in the daily stream of nonsense, no! But 20 hours a day, with a few crumbs left for entertainment, the channels offering this time to Coca-Cola a severely restricted viewers’ available brain time.

Populism, demagogy, they say! Realism and lucidity. Let’s not be afraid to be radical, publicly and in other areas of our lives. The more we are, the more likely the changeover will be. It is then that we will feel, by moving, the chains that were holding us. « Let us act as if our insignificant lives matter to those around us. And I am not suggesting in any way that we abandon political action. I’m not suggesting that we let ourselves go and eventually die. What I am basically suggesting is that action is the antidote to despair.(5).