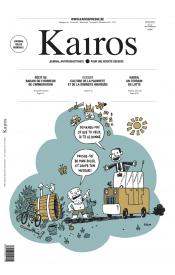 SOMETHING OTHER THAN A « PURCHASE

Subscribing to Kairos is not an act of faith, an oath, or the equivalent of joining a cult. Contrary to those who criticize anti-productivism, the refusal of hyper-consumption and of a society totally subordinated to this way has nothing to do with an insertion in the field of forced thought; the absolute and forced adherence under the illusion of free choice is not our predilection, it belongs rather to the field of marketing and advertising. Supporting Kairos is quite simply and for a modest sum, giving importance to the maintenance and resurgence of a free press, not subject to the diktat of numbers, « ratings » and opinion. It is daring to say what we think, fed by what we see, what we observe, the constructed reflection of others, the striking contradictions, and a questioning of our own existence. Not for the pleasure of the adrenaline rush, but because injustices disgust us. Certain ideas are therefore, in our opinion, essential to defend. A work of public health.

If the uneasiness must sometimes arise for the one who has Kairos in his hands, we think that it is not because we « exaggerate », but because the other media have accustomed them to accept their own submission to the world they describe and make. Would agreeing with everything we write be the necessary commitment to subscribe to Kairos? Certainly not. Not all of us are ready to read things that challenge our lives, to receive content that may hurt us, to accept the contrast between who we are and what we think. Moreover, we do not have the prerogative of truth, even if we think that in front of the ambient media ineptitude, we have the merit to make people think, and that if we were without risk, we would have already been talked about in the editorial offices.

To read us is not to make a profession of faith, but to admit that the debate is lacking, that the hour is serious, and that it is by remaking this world that we will be able to relearn to think and, necessarily, to relearn the pleasure of going towards the other. We are in lack of thought, not of this physiological, quasi-technical thought that technocrats like in robots, not this thought that one wanted insidiously to assimilate to the act of thinking, but a critical, reflexive, radical thought, which links us.

It is therefore clear that for us, subscribing to or buying Kairos is not a commercial act, as it is when we buy a mainstream newspaper. In the same way that selling Kairos is not growing your capital, buying it is not buying material, being considered as a potential customer(1), but it is sharing ideas, feeding the reflection. So you might buy a Kairos and in the evening, at a conference, you notice that they are being given away. Don’t feel bad. Kairos should be free. Its contributors should make a living out of it. It’s not like that. We are engaged in a struggle.

If some of the content of Kairos revives you, immerses you in a media reality that you are not used to, that is enough. If others put you off, make you doubt, it is probably normal, but it should not imply your refusal to support us.

Because without free media, the day will come when the refusal of this society and the destruction it implies, of the abyss in which it leads us, simply cannot be expressed anymore.

Tell people about us!

You are the fuel of the newspaper.