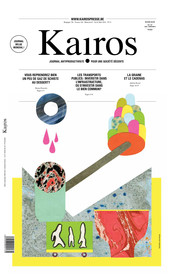 I AM AGAINST IT BUT I PARTICIPATE

While a certain minister, Mrs. Turtelboom, who not long ago blithely sent women and children back to their country, was not ashamed to receive as Minister of Justice the ambassador of Saudi Arabia — a great defender of women’s rights -, the same minister is now promising to achieve equality between men and women by giving children who will be born the possibility of a double surname: « A historic moment in the path to gender equality » (Le Soir, February 26, 2014). Certainly. As if equality could be achieved by superficial adjustments, by advocating certain equitable rights in a deeply unequal environment. This will certainly delight the conformist feminism and the great philanthropists fervent of the class agreement, from now on reassured, housewives — excuse me! surface technicians — and rentiers being able from now on to transmit to their offspring their respective family name. Whether or not each of them will leave a very different material legacy is beyond the scope of Ms. Turtelboom. After the euthanasia of children, the suppression of the 1 and 2 cent coins, when will the next debate be held in an electoral atmosphere? Typical of pre-election entertainment, whose subversive character is inversely proportional to its media coverage, these gesticulations are non-events. They only aim at awakening individual indignation in order to, for a moment, make us forget everything else.

But is what happens closer always less heartbreaking? Even if struggles, resistance and awareness persist, blossom and emerge here and there, the forms taken by certain struggles speak volumes about the formatting of consciences and about the traces left by selfish interests. Thus the petitions that are flourishing against the overflight of Brussels by airplanes, since the new « Wathelet plan ».

The data of the problem seem quite simple:

- Aircraft overflights generate both visible and invisible nuisances, each with consequences.

- Many people fly, apparently all the more so in municipalities with a high socio-economic level such as those in the south of Brussels, now affected by the new overflight plan;

Let’s imagine what the resolution of this social situation could be in a decent society where economic issues would not take precedence over everything else? Extrapolating from the fact that airplane users did not realize the damage caused by airplanes before, becoming aware of the most visible effects of these because they now suffer them on a daily basis, they would decide not to take them anymore, or at least to reduce their use considerably. Wouldn’t that be the most logical, and the healthiest? — even if we cannot resolve it in our practices, can we admit it in our thinking?

But we have not seen any citizen or political petitions complaining about the invisible nuisances, such as pollution, caused by the planes. The invisible nuisances, destruction of nature, diseases, oil extraction and others, are secondary, taking them into account is counter-productive to the capitalist economy: the real nuisances are, paradoxically, « harmful ». We therefore pretend to want to reduce them, while encouraging the activity that directly produces them.

The users, and the politicians who most often support them in this demagogic and electoral approach, talk about the perceptible nuisances, those that directly affect them, in their small lives, no matter what the neighbor lives. In a society where « economic necessity » favors egoism, every man for himself prevails: the « benefits » of technology and modernity for me, the dirt for others. So we fight against the plane… at home, once it disturbs us, forgetting that it used to disturb others and that, when we are on board, it produces the effects that we hate when it flies over us. « Nobody wants the noise of airplanes » was the headline on Le Soir’s website. But everyone wants to get on board!

There are things, therefore, that should not be questioned: mega malls, 4G, multi-modal and permanent advertising intrusions, … all these things that feed productivism and that are never put to the test, which gives all this blandness to political debates from which, by dint of it, we cannot be blamed for not expecting anything anymore…