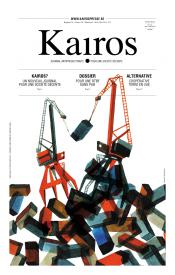 This is the crisis, as you know, the kind of crisis that we don’t really know where it’s going, but which is sure to lead us into troubled times. This did not happen by chance. Where we are now, the mass media have undoubtedly contributed to push us, complacently or actively maintaining the productivist policies of more and more and everyone for themselves, feeding the one-upmanship, obsessed as they are by the growth of their market shares while they lose their readership and their means. This is one of the reasons why Kairos was born.

Faced with this crisis, which is the logical consequence of our mode of development and not an accident of history, we do not hear enough, not at all enough, the words and proposals that seem to us to be adequate or valid answers. Who, today, defends positions that make sense in the face of the economic steamroller that is devastating nature, consciousness, man and society in the same movement? We do not see any words that attempt to articulate the words in such a way as to address simultaneously these diverse and indissociable dimensions, and yet we have become accustomed to separating them in the West. And when we hear heterodox voices, they are often only an alibi for the media tsunami that feeds the cultural bath of overconsumption, productivism and vacuity.

Nor do we hear proposals and analyses that are up to the challenge, that is to say, that go deep enough to get to the root of the problem. In other words, our era is sorely lacking in radicalism, which is really just consistency. More than ever perhaps, radicality is not only a realistic response to the state of generalized decay, but also a pragmatic necessity to envisage other ways of living better, which it is a question of making possible before a leaden screed such as that cooked up by our economic elites falls on the remains of our frail democracies.

The marginal arrangements, the palliatives and the accompaniments of the system in the manner of « sustainable development » legitimize the race of the worst that they claim however to stop or divert. Kairos wants to be radical to be realistic. Realistic, and therefore radical. A radicality that is measured by moral values and that has a hold on reality. This raises the question of where and to what extent this radicality applies in the first place, to which Kairos responds with an effort of non-violence.

This « articulated radicality », Kairos finds it in anti-productivism, in the objection of growth, in voluntary simplicity, when it is at the same time a question of cultivating conviviality and promoting decent societies. However, the media logic, which is the distorting reflection of electoral and economic dynamics, opposes to decent antiproductivism the politics of silence. Kairos thus intends to respond modestly to the need for media coverage of anti-productivist statements which, in order to be known, must be heard, by leading to something other than blah blah blah, and by striving to link analysis and action, criticism and testimony, an invitation to think and to act.

Kairos will be published five times a year in the format of this first issue and once more as a special issue, focusing on a more in-depth subject.

Different sections will be installed over the issues. In this first edition, we will describe one of these « obvious things ».

Thematic files will be regularly proposed, without being systematic. We open the ball with a dossier entitled « For an ad-free RTBF ». It will have two parts devoted to the influence of commercial advertising on RTBF, while its management contract is being renegotiated. In this issue we propose a « letter campaign » action, so that by reading Kairos, you can also act!

We will also devote special attention in each issue to living and current alternatives, initiatives that are proof not only that another world is possible, but also that another world is already here, a world that is more just, more fraternal, more beautiful, more sustainable… and that in the end, not much is missing for it to grow, to replace the one whose collapse is beginning before our eyes. In this issue, you will find a presentation of « Earth in Sight » by two of its initiators.

Kairos will also offer a classified ads service, book reviews, and brief commentaries on current events, some of which will be extended on its website, which will be gradually expanded (www.kairospresse.be).

Dear reader, we hope that Kairos will not leave you indifferent, will interest you, will question you, will push you to think, not to flinch and to act, because it is the moment!

Looking forward to reading you,