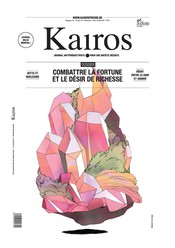 The Taboo of Ordinary Decency

It still seems difficult to make a certain left-wing group, often confined to the offices of universities, recognize that the higher one climbs in the income hierarchy, the further one moves away from the other, that the more fortunate one is, the more one does everything to remain so, with, among the infallible and indispensable methods, those of crushing, surpassing, competing with one’s neighbor. The corollary of this, and this is where academic self-righteousness most often stumbles, is that even if the lower classes are as receptive as others — and sometimes more so — to the siren song of consumerism, their more precarious living conditions mean that « the traditional values of mutual aid and solidarity are still massively present in working-class areas (1) « . This refusal to recognize this form of evidence feeds both on the class contempt that the petty and middle bourgeoisie has fed for decades, laughing at these « rednecks » and poor ignoramuses of all things spiritual, but also on a deep class distance structuring a misunderstanding where stereotypes always have a good place.

It is because the moral attitude does not allow itself to be defined by theoretical conceptualizations, the very ones that find their place in sociology courses. Those who try to understand what still remains of common decency in populations that have not yet been completely colonized by the market values of unbridled capitalism will be copiously castigated. No wonder then that Frédéric Lordon, the icon of the French left, then decried Orwell, and thus Michéa, stating that « conceptual weakness is nowhere so glaring as with common decency (2) « . The director of research at the CNRS needs concepts, statistics, measurable data, without understanding that morality cannot be measured like that; he and others do not want to understand that the generalization of mass culture gave to the common people an awareness of their social inferiority at the same time as it destroyed their values and their cultural models (3). The authors of the violence of the rich show it very well, when some students of a working-class high school had to write an account of their feelings during a walk organized in the beautiful Parisian districts:  » When you enter a luxury store, and you don’t belong to the bourgeoisie, you feel uncomfortable (…) people are too friendly. It is a kindness that we are not used to and it bothers us. Moreover the look of the people and even the salesmen and saleswomen, looks mocking, they know that we have nothing to do here, because we do not have the means to buy their products « . Another adds:  » The salesmen and saleswomen, the doormen too, would say ‘hello’ to us, on the one hand to be polite, but on the other hand to show us their superiority, to show us that we were part of a different class from them. One student describes this staging perfectly:  » The bourgeois have a behavior that is at the limit of « playing a role ». It seems that they are never natural(…) Compared to the working class, for example: we who are natural, do not play a role « (4).

If a certain intellectual left refuses to recognize what still remains of ordinary simplicity in these classes oppressed by capitalist globalization, it is because it refuses to condemn the destructive progress, the consumerist uniformization, this « fever of obedience to an unstated order (5) « , this  » The new fascism, the consumer society, has profoundly transformed young people; it has touched them in what they have of intimate, it has given them other feelings, other ways of thinking, of living, other cultural models. It is no longer a question, as in the Mussolini era, of a superficial, scenographic enregimentation, but of a real enregimentation, which has stolen and changed their soul (…) the real fascism, I said it and I repeat it, is that of the consumer society (6) « .

Highlighting the racism of the working classes, the first victims of the deregulations of globalization, in order to better attack the idea of ordinary decency that they still have, these left-wing intellectuals do not understand that this racism is the result of a « destruction of the class consciousness of the dominated [qui] does not prohibit resentment and forms of hatred, [dévoyant] its political expression towards choices that do not conform to their class interest, [comme] the popular vote for the FN ».