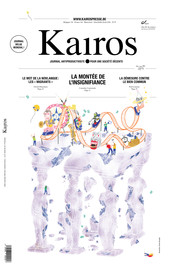 Most of the time, it’s true, « alternative newspaper » is one of the formulas we use to define Kairos. It is not that we wanted to quibble, to split hairs, but we started to question the relevance of the term. And deep down, the doubt contained much more than just the question of whether or not to use a word.

« Alternative »? Even if some definitions seem to be partly in line with our point of view, such as the one that defines an adjective as something or someone « which proposes to conceive differently the system of production and consumption », the fact of being able in reality to put a little everything and anything in the semantics of the word, is more than embarrassing. There are now alternative fairs, alternative food, alternative vacations, alternative work, alternative banks, alternative politics…

Not that we are looking for a form of labeling that would indicate what the « real » alternative would be, a recognition that would contain in itself the negation of what it claims to be — an alternative cannot ask to be recognized by the very system it criticizes. But we just refuse to be one day assimilated to a term which will not fail to be recovered by the system, the very one we want to see disappear.

We therefore prefer to simply define Kairos as a newspaper free, independent and committed; radical, in the sense that we give a fundamental importance to engage the reflection at the level of the heart of the problem and not on its superficial manifestations, elements of surface of which the mass press gargles and which prevent to think the problem, and thus to solve it.

But above all, and this is perhaps what differentiates us from other newspapers calling themselves « alternative », what we are deeply convinced of is that one cannot blissfully co-exist next to the dominant media without denouncing its indigence, mediocrity and the importance it plays in the construction of thought. To say that the knowledge of the majority on this world could be quite different if the media were independent is therefore for us an obvious fact; to show you where they speak to convince you of their bias remains essential.(1) But we are not « next door », struggling as if there is nothing stopping us… We are integrated in spite of ourselves, caught in a system whose functioning we are trying, at our small level, to stop. To call oneself « outside », to selfishly escape from the system and take advantage of its benefits, is it not worse than being inside and recognizing it, as Slavoj Žižek says: « If the real evil eating away at our capitalist societies were not so much their capitalist dynamics as our attempts to extract ourselves from them — while enjoying their benefits — by creating inward-looking community spaces, famous American-style « residential enclaves » with exclusive groups, whether religious or ethnic (…) The exemplary figures of evil in our time are not the lambda consumers who pollute the planet and live in a violent world with decaying social links, but those who, while contributing to the creation of this execrable universal environment, can afford the luxury of escaping it by settling in overprotected residential enclaves, eating organic food or taking their vacations in nature reserves ». Kairos is therefore not in a « protected media enclave », a kind of AOC(2) of the press that would surf on the wave of the « alter », would benefit from subsidies while gently titillating the deadly capitalist system, without risk of disturbing it.

We are not for the sustainability of Kairos, we are against the sustainability of the system that is destroying us, and this implies our provisional existence. Full of contradictions, we are immersed in this world of which we love multiple manifestations: that of nature, of the link between beings, of simple beauty, but we abhor the system that wants to reduce all this to the commercial sphere.

We will therefore continue to keep an independent newspaper alive. It’s not always easy, but it’s been going on for four years now.