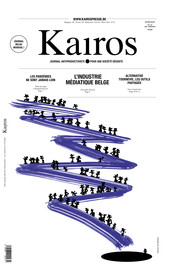 PROHIBITION TO THINK UNDER PENALTY OF EXCUSING

The illusion of living in a democratic state, — in the sense that the people would be sovereign and would participate in the collective life and in the decisions by being perfectly informed — conceals most often under the form of « the accident » what is basically the direct product of a system.

Thus, the media-political explanations around the attacks always make the tragic facts something that is either fatal, or a hitch in a democratic process that should be perfectly functional. In the first case, the terrorists would be just barbarians who refuse our modernity; in the other, a defect would have seized the democratic machine: lack of surveillance of the « elements at risk », deficiencies of the police or the justice system, « imperfect » inter-community dialogue…

But in both cases, the root of the problem will not be revealed, namely that the deep inequality that characterizes our society has a prominent role in the current dynamics. Not to do so is to attribute the cause solely to the being, without any influence from the society in which he lives. It is forbidden to try to understand: « to explain is already to want to excuse a little « , said Manuel Valls during the ceremony for the one year anniversary of the attack on the Hyper Cacher at Porte de Vincennes. Absence of determinants which very quickly resembles racism: if it is not misery, the loss of sense of a society which drowns in hyper-consumerism, the feeling always to be excluded, ostracism and ghettoization, it is then the essence of the subject which explains — without explaining… — the facts… no chance if this one is more often Muslim: the connection is made.

And everything is the same, deeply characterizing our society and the spectacle of change that must constantly accompany it, brilliantly played by the mass media that peddle the right thought. For indecency requires that it take on the contours of decency in public and that continuity be clothed in the clothes of change, always promised. So we don’t prevent ills, we produce them and relieve them a little, because the economic model is like the rain that falls: an element of nature! Following the 2008 crisis, traders and stockbrokers have resumed their small-scale trading — which prepares the great economic collapse that will soon appear — the same that had led to the crisis; during the COP21, an internal communication of the European Commission that has leaked taught us that  » the overall objective of the European Union was to obtain decisions from the conference without any explicit reference to the market and intellectual property rights issues and to minimize discussions on trade-related issues « (1). We now know that they succeeded.

So we continue the path towards the worst while pretending that we are acting in a completely different direction. We « communicate » about peace while we prepare for war. Manuel Valls refuses attempts to explain the jihadists  » who tear up this contract that unites us  » while he breaks all unity and while an extension of the loss of nationality is being discussed in the Assembly.(2) The words of Latifa Ibn Ziaten, the mother of Imad, killed in Toulouse on March 11, 2012, ooze that humanity no longer found in political puppets who no longer speak but « communicate »:  » it’s young people that we don’t listen to, we don’t try to hear them. And when I heard these young people say « Mohamed Merah is a martyr, he is a hero of Islam », I saw this suffering in their eyes, I said: « it is there that we must reach out ». « (3).

It remains to be seen who the real « enemies » are.