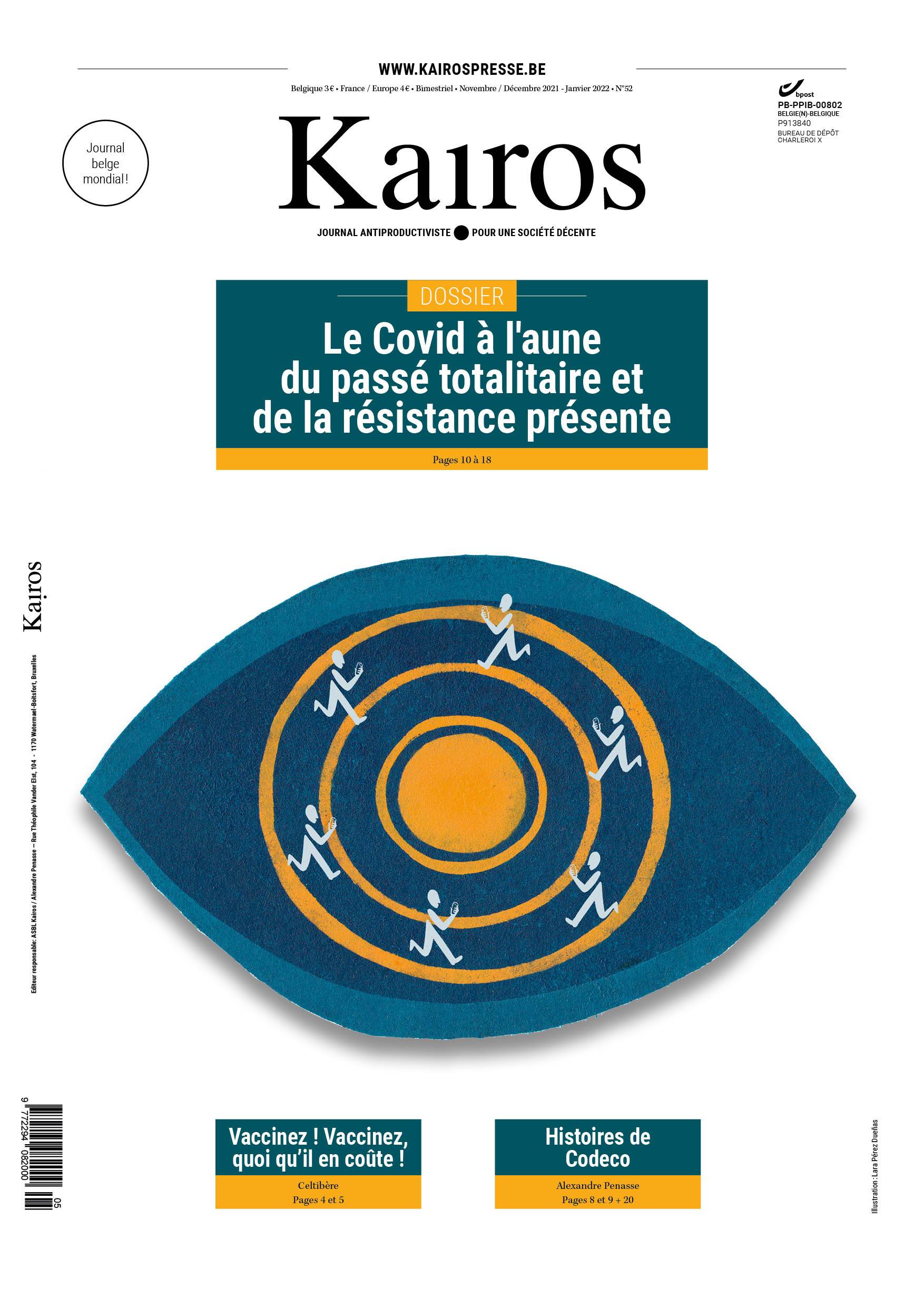 The newspaper Kairos was one of the first media to point out the major problem of PCR tests, which will lead to a dramatic management of the crisis, based on a totally erroneous view of the health situation(1). In short, and this is very serious: the much too high amplification cycles of the PCR tests have led and still lead today to see « cases » everywhere, i.e. sick people, whereas the PCR method does not  » detects only the presence of the SARS-CoV‑2 virus genes, but in no way informs on the physical condition of the tested person(2) « . If there are no symptoms, a positive test result does not indicate illness or contagion.  » In conclusion, PCR is a diagnostic confirmation tool and not a mass screening tool . Martin Zizi, who wrote his words more than a year ago, already challenged the Belgian scientific community to provide evidence that his explanations were wrong. Since then, nobody has contradicted him, but all, scientists, media and politicians, have continued to do the same thing, leading to this delirious situation where everything and its opposite can be expressed, the truth not having any more any kind of importance, the end justifying the means (threats, lies, contradictions).

Instilling anguish in households, based on figures of saturation of hospitals whose means have been reduced for years by the same politicians, preventing the first line, the general practitioners, from working and prescribing freely, sending back by a logical effect the patients to the hospitals and participating in this saturation, forbidding or denigrating the preventive and curative treatments, they have created the crisis from scratch. Governments have modelled their liberticidal political measures on the industrial agenda of vaccine production by the pharmaceutical mafia. Nothing to do with warnings about the risks of their choices in relation to their supposed benefits,  » we will analyze afterwards what was the global cost of the pandemic and if the measures we took were the right ones or not  » (cf. Press conference on March 24). They didn’t say so, but were willing to sacrifice lives to supposedly save them. The truth is: to sacrifice a youth, small independents, old people, social life, what was left of moral values, to put our head down to make us feel that we can hardly breathe and then to offer us the lifeline: the « vaccine ».

Gene therapy if it is, whose side effects come back and leave these government pantomimes still silent, for a disease whose real mortality rate oscillated between 0.3 and 0.6%. In other words, nothing that would have required stopping the entire society and vaccinating a humanity caught up in a life-size experiment.

Nothing, except the money, taking into account the soaring share price of the vaccine and the windfall of the PCR test for laboratories that in Belgium were performing 600 to 2000 per day, at 47€ per test…

In the meantime, the latest « papers » in date passed by, returned in the bags of the history as fast as it arrived, Pandora of its small name. For it is only the names that change, like those who discover the hurricane before it hits and give it a name. Tax evasion and various traffics are obviously killing in unprecedented proportions with Covid. Moreover, the Covid deception is part of this form of organized crime where, once again, financiers and politicians have been able to put their interests first. And insidiously re-sell their very lucrative lifetime vaccination subscription: « A vaccination certificate is valid for one year, starting from the day of vaccination »(3). Soon, unable to keep quiet about the deaths from vaccines, will they tell us that some had to be killed to spare others?

How long will all this occupy our minds and bodies, as life passes, and passes only once? Under the deceptive governmental will to save everyone, this « utilitarian deontology » has two meanings(4)The political and media order has succeeded in making the governmental injunction to vaccinate the subject its own. Obviously, this should not be seen as a form of solidarity in a society where « social workers », for example, to name but one, work every day to repair, and thus mitigate, the damage caused by iniquitous policies. So we see the emergence of these « good citizens », quick to obey the chief when it suits them, at « little cost ».(5)They did not find anything to complain about when those they listen to today, yesterday, withdrew resources from hospitals, favored multinationals by allowing them to pay no taxes (cf. Didier Reynders and notional interests), did not and still do not implement anything to dismantle tax evasion, etc.

It took decades of advertising hype (advertisements or political speeches), so that the subject is not even able to perceive these obvious contradictions, that they accept that pharmaceutical companies already condemned several times in the past sell their product via their commercial delegates to political orders.

Two conditions have made this state failure possible, which will leave its mark on history and, let’s hope, will one day put the politicians and those they obey in the dock(6):

- a media powerhouse speaking with one voice and now available on mobile devices 24 hours a day.

- An atomized society where the subject, receptacle of official lies, can no longer rely on a social fabric outside the matrix, to make real choices. Freedom is slavery, so a disassociated « society » is needed for the subject to find only ersatz solidarity in these special invitations to take care of each other.

Those who come from the Boston Consulting Group (cf. Decroo), McKinsey, Deloitte, whose business is to increase competitiveness, and therefore to get rid of all the burdens, have no credibility to talk to us about what they are trying to destroy every day, by their measures.

Their promises are only shrouds that hide the death they sow.