WORKING 5 DAYS, THE PILLAR OF THE ECONOMIC ORDER 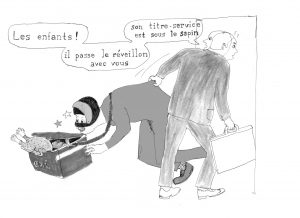 In the early 1930s, in an effort to end technological unemployment, John Maynard Keynes envisioned the prospect of his grandchildren working 15 hours(1), or two days a week. From 1840 to 1940, while hourly labor productivity increased by 260%(2), the legal duration of annual working time decreased by 61.5%. By comparison, from 1950 to 2017, while productivity increased by 707%(3), legal hours decreased by only 18%. In 2019, despite rising unemployment and productivity gains, the legal workweek for Keynes’ great-great-great-grandchildren is 35 hours. But above all, executives and the middle classes still work 5 days a week.

Since the mid-1970s, boosting GDP growth has been seen as the only way to reverse the unemployment curve. Since the planet’s resources are limited, unlimited GDP growth is not sustainable in the short, medium and long term. The imminence of a collapse, which is revealed by the frequency and intensity of extreme weather events, floods, droughts, pollution peaks, etc., makes it necessary to consider again the reduction of working time. It therefore seems to me necessary to question the motives that would incite the economic and political elites to oppose so fiercely the reduction of the legal duration of working time and free time. Regardless of the fact that growth generates profits, the causes of this fierce opposition seem to be more societal than economic.

By considering the clock, the calendar and the timetable as means of organizing the rhythm of individual and collective practices, the sociologist Roger Sue makes time appear as an instrument of social control and domination(4). The social times(5) correspond to blocks of time to which a society gives a particular importance. Even if they give a reductive approach of the social reality, the activity that dominates tells us about the value system, the mode of production and the dominant social category of a given society. Sue characterizes a dominant social time on the basis of five criteria(6), of which I will only use the first four.

The first criterion is quantitative. The social time of an activity is dominant when the time devoted to it is the most important. In 2013, while an employee, who works 35 hours, spends 39.6% of his or her waking active life working, an executive, who works 50 hours, spends 54%(7). Since an individual spends between 39.6% and 54% of his or her waking active life working, work time is the dominant social time. In other words, society is organized around professional activity. The second applies to the mode of production. Despite the fact that modes of production are abundant (religious, housewife, voluntary, associative, etc.), the form considered dominant is the one practiced during the dominant social time. Even if the economic production represents a tiny part of the social production, the social time of work being dominant, the notion of production is confused with the economic form. The third is values. The dominant social time determines and hierarchizes the value system of a given society. Since the social time of work is dominant, it is the professional activity that allows an individual to socialize, to define his social identity, to nourish his self-esteem, to distinguish himself, to accomplish himself and to give meaning to his life. The fourth corresponds to the dominant social category. A society is characterized by a hierarchical system dominated by an identified social category. The dominant category legitimizes its authority by using force, an ideological system and by imposing its social time. By organizing the rhythm of society around the activities that serve its interests, the dominant category imposes its social time, its mode of production and its value system on the other social categories. By imposing its social time, it determines the rank and place that an individual occupies in the hierarchy of the dominant social order. Since power is held by the one who controls time, its appropriation appears to be an issue of political struggles and major social transformations. The social time of work being currently dominant, the social hierarchy is derived from the position occupied in the social division of labor. Since work activity is a means of monitoring, controlling and occupying time, it thus appears as the central pillar of the economic order. The authority and power of industrialists, bankers and businessmen are therefore not based exclusively on the accumulation of money and material goods, but on the control of time. Without his control, they would have great difficulty in legitimizing their authority and maintaining power.

From the mid-1970s onwards, in order to avoid rising unemployment, economic and political elites could have chosen to use productivity gains to gradually reduce the legal working week to 35, 32, 24 and 16 hours. If they had made this choice, they would have caused the collapse of social time, values and modes of production linked to work in favor of those linked to free time. By making this choice, the legitimacy of the authority of the economic order would have collapsed in favor of the proponents of the social order of free time. In order for the economic order to retain its power, the number of weekly rest days for managers and the middle classes must not exceed 2 days. By imposing the 5‑day week, by blocking wages, by deregulating prices, by making social trajectories more precarious and by maintaining a climate of insecurity with the fear of unemployment, the economic elite is trying to preserve the legitimacy of its authority. In order to remain in power, it implements an economic and social policy, inspired by the ultraliberal ideological doctrine, which maintains a climate of systemic crisis: endemic unemployment, the rise of the extreme right, the risk of wars, global warming, the depletion of raw materials, air, water and soil pollution and the disappearance of biodiversity. Consequently, the choice of reducing the legal duration of working time is not an economic choice, but a choice of society on which the survival and future of humanity depends.