Women without rules, an emancipating break. 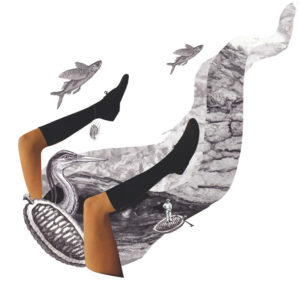 The medicalization of the different life cycles of women by the patriarchal, religious and productivist dominant power responds each time to the same need to measure, control and mistreat women in their bodies, who are assigned by the hierarchical distinction of the sexes to the status of dominated(1). We are dealing here with the particular scenario that has been written and is being played out around the return of age.

In the Middle Ages, supported by Galen’s ancient theory of humours, women without menstruation retained the waste-laden menstrual blood and were shamed. For the learned discourse of the doctors they were unhealthy and poisonous, for the religious power they were evil. With the birth of psychiatry, they were saved from being burned at the stake and opprobrium to be locked up in insane asylums because they were crazy, poor, isolated, old, « hysterical » or suffering from a « psychosis of involution »(2).

At the beginning of the 20th century, the new configuration of menopause was built in the perfect logic of medicalization. A substance is synthesized in the laboratory, estrogen. The new drug or biomedical technology seeks and invents its disease. The industrialists, against the advice of the faculties will try it for everything; they will thus, among other things, prescribe it to the workers to improve their output. Thanks to the new paradigm used in endocrinology for deficiency diseases such as diabetes, where it was discovered that the deficiency of a hormone that can now be measured can be compensated for by a replacement treatment with a hormone that can now be synthesized, postmenopausal women who have a decrease in estrogen levels compared to young women will be treated as if they were deficient, whereas this difference is physiological and effectively protective. The return of age has thus become an illness that begins with the visit to the gynecologist, is consecrated by the clinical and biological diagnosis at the same time as the announcement of the fatal prognosis and the promise of a possible resurrection thanks to long-term treatment and regular monitoring.

During the whole century, the dangers (cancers, circulatory accidents) and the quasi uselessness in the majority of the cases of this treatment will be demonstrated, nothing will make it, the passers of legal drugs will continue to abuse the subjected women, consenting and full of gratitude for the learned attention which is brought to them.

Thus, in our country, this physiological change that can be an existential metamorphosis, a new life, a change of roles, an awakening… is experienced by isolated and mystified women through its social treatment, medicalization. The changing body that can no longer reproduce is only thought of as a lack, an inadequacy, a pathology. In our world of consumerism and experts, this practice allows the actors of medicalization (pharmaceutical, biotechnology and cosmetic firms, media, political powers, supporters of a certain medicine) to make the curse of the body and the being of the obedient and subjected women.

What to do to escape this sinister initiation path? We could prescribe an antidote in emergency to breathe again and regain strength, such as a dose of Testo junkie(3).

RECALCITRANCE, « OUR BODY BELONGS TO US ».

The dominant discourses have the power of definition and attraction; they constitute us, subjugate us but also give rise to discourses of resistance and liberation. Thus, in the face of the power of biotechnology and pharmacology(4) In addition to these discourses and practices, which are supported by a certain conception and institutionalization of medicine in collusion with religious, economic and political powers, other discourses and practices remain and develop, in cellars and back rooms or in the open air.

In fact, since the eighties, in reaction to this pseudo-scientific montage enriched with perverse fantasies and sexist vulgarities, menopause has become a subject of analysis and counter-discourse.

The activists of the « Women’s Health Movement » have studied the genealogy of medical discourse and practices founded in universities from which women were excluded and built on the contempt and denial of women’s secular knowledge, persecuted and burned for witchcraft and then prosecuted for illegal practice of medicine(5). They made a political and gendered critique of it, denounced the omnipotence of the pharmaceutical and biotechnology industry and, above all, gave a voice to women. Thus, a new knowledge was built from their life stories.

It is their narratives that constitute the most convincing healthy and peaceful argument, to diffract and dissolve the devaluing and cruel clichés that produce and perpetuate a subject: the menopausal woman.

For example, the empty nest syndrome that women would have when the children leave home and leave them alone, useless and depressed!

Women speak of the departure of their children in terms of accomplishment and relief; they enjoy the newfound freedom; perspectives open up, other priorities emerge; they have the time, the strength, the desire, the inspiration to embark on new adventures, to realize their childhood dreams: to do nothing, to travel, to study, to work differently, to sing, to make music, to paint, to meditate, to garden, to change partners or to live alone, to welcome their grandchildren

Similarly, the assertion that sexual desire diminishes, since the vagina dries up and atrophies, or that according to certain theories of the unconscious, ashamed of their fantasies, they who only desire their sons, prefer to abstain from all sexual relations!

When they talk about their love life, some of them describe themselves as being more daring and freer; they say they have more pleasure and above all, they no longer accept unsatisfactory relationships, they want to change « the habits » of the couple, they want a more sensual relationship, more respectful of their pleasure, more attentive to their body.

And this other assembly that wants that at menopause, women present specific physical and emotional symptoms, debilitating, related to a hormonal insufficiency and to be treated as such!

First of all, it is a generalization, since less than a third of women complain of being disturbed by the symptoms evaluated; moreover, they consider the causes of the discomfort to be multifactorial (personal, family, professional situation); and above all, remedies and arrangements exist to relieve them without having to resort to costly treatments that can be harmful. But it is above all a manipulation if, under the aegis of medicine, they are assigned to live this time through the prism of symptoms constructed as a framework of experience. So the majority of women are indeed sick at menopause, as they are every month at the time of menstruation, and during pregnancy, and at childbirth, and during breastfeeding. It follows logically that being a woman is to be a sick person to be monitored and normalized because it depends on a pair of ovaries and a uterus that were removed in the last century and that are now controlled by hormones.

Since these various simplistic and devaluing fictions constitute the modern myths of passage available to women around fifty, it is high time to deconstruct them and especially to create new ones, complex stories for a complex reality, so that women who wish to do so can use them in all dignity(6).

In order to resist and produce another discourse, the ASBL Women and Health(7) organizes, from the perspective of the « Women’s Health Movement », with the concepts of health promotion and its determinants, work and discussion groups for women around the age of 50, intergenerational groups, health workshops from a gender perspective (sexual and reproductive health, self-examination; immunity; nutrition) and provides training for women « pairs ». The ASBL has also set up a platform for women’s health where experts develop practices, analyze issues and formulate demands to challenge the various authorities. In all our activities « feminist intervention » with its emancipatory strategies inspires the work with women, which implies supporting and respecting women in their approach, deconstructing with them the « caregiver/caregiver » power relationship from the feminist analysis of « care » and reappropriating the secular and scientific knowledge about their body to strengthen their ability to understand, discuss and decide on the choices that are proposed or imposed on them(8).

This group work promotes egalitarian relationships and the regaining of power over one’s life, the conscientization of women by taking into account the plurality and complexity of their experiences; it breaks their isolation and develops bonds of solidarity in the struggle for individual and societal change.

This approach is radically participatory. Women contribute to the development of programs and knowledge. If the activities vary in their forms, the approach remains constant and gives women the tools to act on their health outside of the consultation and medical care. Information in a group, focused on specific health promotion themes, allows women to clarify and share their questions about their life, body and health, to put their physical and emotional sensations, during periods of transition, in a global, psychosocial, cultural, political and ecological context (work, family, stress factors, lifestyle, addictions) and to increase their skills to live better.