What to do with individual freedom? 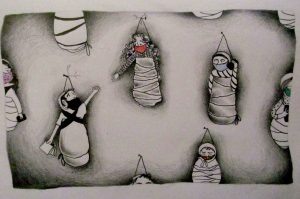 « Between the catastrophe and the planetary totalitarianism intended to avoid it,
What is the margin of our freedom?(1)

In Kairos n° 41, I addressed the question of individual freedom in a world constrained by the overcoming of ecological limits. The political-sanitary event leads me to update my position, but without touching this: the limitation of a part of our individual liberties(2) to safeguard the biological bases of life remains more than ever topical. In our old Europe, which thought it was safe from the turbulence of the world, everyone can empirically observe the consequences of climate change. On November 18, the thermometer showed 15°C in the Liège region, about 10°C above seasonal norms. We are all on the same boat, as I wrote in Kairos n° 46.

As we live in the late phase of neoliberalism, what is happening to the liberal philosophy itself? It’s not going well, and we have reason to be concerned! Let us recall that, in his view, there are three fundamental rights that must be ensured at once: life, liberty and property. But under covidism « life » is crushing liberty, the fate of property remaining in suspense… The time is long gone when Jean-Jacques Rousseau could declare that only obedience to the law can unite the authority of the sovereign and the liberty of citizens. In 2021, there will be no need to obey the law, only decrees that are as inoperative as they are liberticidal in the name of public health, and which above all assert the authority of the executive. Jacques Généreux makes a broader point here:  » At the height of their historical dominance, liberal democracies and capitalist economies are the site of a simultaneous regression of civil liberties, individual quality of life, equality, social cohesion, civility, personal security, and the potential for future generations to flourish(3)? « .

Let’s go back to individual freedom, which comes in two forms: negative and positive. The former is now being abused by political and sanitary measures: compulsory wearing of masks, tracing, confinement, curfews and soon compulsory vaccination (directly, legally) or « compulsory » (indirectly, hypocritically). The fear of contagion adds a new facet to the pile-up of personal spheres, which this time is no longer through the senses (sounds, smells, touch) but through an « invisible enemy »(4) potentially present in each of us, forcing us to conform to a series of rules. With the meter fifty of distancing, a new regulation of space is established, probably for a long time, since we expect other pandemics much more devastating; it will inevitably impact the quantity and the quality of human relations. Will it still be possible to fall in love by meeting and approaching a stranger in the street? Woody Allen’s films will take on a nostalgic tone… Metaphysically, a common destiny has imposed itself, even if the particular outcome from one individual to another remains uncertain: will it be non-contamination, contamination followed by a total recovery, contamination followed by a recovery with after-effects or contamination followed by death? Surprisingly, this idea, which would have seemed « fascist » until recently, is now well accepted by voters-consumers who are convinced of their singularity («  I like the beach and you like the mountains, so what?  »). Alongside non-constraint, another aspect of negative freedom is the freedom to consume. Not only did the epidemic not fundamentally hinder it, but it boosted it, since confinement is better tolerated, it is said, when the table is well set, the glasses well filled and the screens well occupied by series, films and video games. Multinational online retailers, Amazon and Alibaba, have taken the lion’s share of the credit at the expense of local commerce, which has been shamefully sacrificed on the altar of public health. As for the airlines and the winter sports resorts — to take just two emblematic examples — their possibility of making a profit in such a context remains hypothetical, but we are certainly not going to pity them! However, as our consumerist aspirations are now more restricted, the sense of individual freedom is waning. I’m allowed to drink beer alone at home, but not with friends at the bar. But freedom is not onanistic, it is shared.

Let’s turn to the second category. Positive freedom is the right and opportunity to participate in political life. It has already been of less interest to voters-consumers for many years(5), and this is not likely to change with consolatory consumption(6) taking up most of the space, as well as with the ban on gatherings, private and public(7). Aristotle had already noticed that human beings are by nature « political animals »(zoon politikon) destined to live side by side in the public space. Condition sine qua non raised much later by Hannah Arendt:  » The action, as distinct from the manufacture, is never possible in the isolation; to be isolated, it is to be deprived of the faculty to act(8) « . However, manufacturing — which concerns the commodity-producinganimal laborans - continues in robotized production units and through the generalization of telework. It is therefore political action that is made impossible by the prohibition of the bodies to meet. Otherwise, how to fight politically? Each one alone at his or her keyboard delivering analyses and opinions to the wind, attributing to the performative a power that it does not have? Because, generally, saying is not doing(9). Positive freedom is also freedom of expression. Of course, this one is unleashed on (a)social networks for better or for worse, but the Power is already thinking of the parade: the fight against fake news and « conspiracy » will justify all the backtracking.

Personally, I gave up my freedom to consume a long time ago; in this respect, the current situation does not hurt me. On the other hand, I claim the right to meet my fellow human beings — family, friends, lovers, colleagues — wherever and whenever I want. Euthanize social, political and partly economic life to protect biological life(10)This is what seems to be the unavowed, perverse and furiously contradictory intention of the leaders, with the consent of a good part of the voters-consumers ready to give up everything that makes the salt and the meaning of the existence, just to stay alive. But is a beating heart enough to motivate and fill a lifetime? Who wants to be part of the cattle that are relieved not to have contracted covid? Not me, but apparently a lot of my contemporaries! André Comte-Sponville is right to warn against a pan-medicalist ideology that would like to dominate the social and political fields on its own. Health is not a value in itself, he adds, but a good that allows the deployment of values: courage, generosity, loyalty, faithfulness, kindness, strength, temperance, friendship, love, freedom, self-improvement, etc. We should therefore learn to put its place in our lives into perspective. So that hypochondria, from an individual pathological trait, does not become a new civilization disease, a new paranoia capable of destroying the social fabric (and unfortunately, it is not going well…).