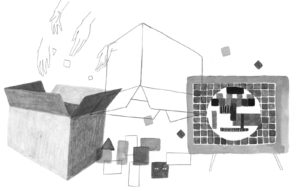 Dear reader, let’s relax a bit if you will.
You know that in our time, when one pretends not to give a blank check to the world as it is and to its elites, one is quickly accused of negativity, of pessimism, among other things. This is far less good than the positivity and optimism of the fashionable media-advertising mindset that the specialists in small steps and plasters have assimilated in whole containers. If the Titanic had had thicker layers of paint, it would have checked out the iceberg for sure. Let’s believe in it more and everything will be better in the best of all worlds. The experts of this supertop thinking, which can be found on the liberal left as well as on the liberal right — with a particular excess among the liberals — are actually making us a little tired. They remind us a bit of those kind of seasoned observers worthy of the great hunters able to pierce with their sharp arrow a starling in full flight at 250 meters thanks to their bow that they proudly band without apparent effort. They are so perceptive that they can say, without compromise, that when it rains, it’s actually sunny, when faced with a blackboard, it’s actually white, and that if you look at the world today, it’s actually fine. Just be positive, aren’t the facts necessarily interpreted differently by everyone? The rest will prevail. It is not that we are against positive thinking when it consists in seizing the beautiful and the good to overcome the ugly and the bad. Not that we neglect the influence of the mind on matter. But finally do not Mélenchon the towels and the cloths. Maieutics is not supermarket marketing, Zen Buddhism is not business coaching. What a time dear readers, everything is going to hell, nothing goes anymore, argh.

To criticize the autonomous public company RTBF as we did in these first two issues of Kairos (to support us, subscribe), is really the proof of our unrepentant pessimistic negativity. And the project please, where is it? What about the alternatives? What solutions? Propose rather than criticize; what the hell, says the marketing refrain whose main enemies are conscience and criticism. In short, it is necessary to propose, not to criticize, besides criticism is never a proposal, that goes without saying.

To begin with, let’s say that for the TV it starts badly since the good TV is the one that doesn’t exist, given that the small window is a harmful object. Our anti-positivist pessimism is back, and we have to fight it.

So, what would a decent television be, if one were needed? First of all, it would be a public television, that is to say at the service of the public, not of advertising interests. A television that is interested in people, in what they live, in the way they organize themselves to live well, in the difficulties they encounter, in the questions they ask themselves, in what makes them happy or unhappy, etc. A television that educates to emancipate, that entertains intelligently, that informs critically (oh nooooooonnnn.…). A television that talks about people and talks to people.

A television that also knows how to listen to people, and take their opinions into account. To do this, there is a simple, effective and cheap solution that will change the face of your screens and radios: listen to people. Phew! It was an intense intellectual effort. Let’s clarify a bit for the superpositive. Well, we could keep it simple:

1) to represent the people on the Board of Directors of RTBF. For example, by adding to the current representation of parties as many seats for administrators from associations or citizens’ groups representing different tendencies, and let’s add that these should be groups that are not subsidized by the public authorities to avoid the particular conflicts of interest so dear to the French Community;

2) to make people participate in the construction of the program grids. Since this requires know-how and people are stupid, ignorant and incompetent, they have to be educated, otherwise they will only watch Arte-style reports and chess competitions in Russian (which is what Minister Laanan and Deputy Head Philippot are afraid of). A hitherto unknown solution (copyright Kairos): the « self-maintaining citizen panel with a retroactive loop »: you take a panel of citizens who document themselves, reflect and propose a new program grid that speaks to people and listens to them. The work is continuous for two years, and you then renew this panel for half. This way, people participate, knowledge is maintained and refined, and people decide!

3) to make people participate in the programs. Another re-vo-lu-tionary idea for a public service broadcaster. The people in the shows, and not even just in the audience benches where the cattle are asked to laugh and clap when asked, but mostly to shut up. Imagine the Sunday debate where all of a sudden politicians have to debate with the public assisted by experts chosen by them to, for example, and when necessary, contextualize the subject. Or mediation programs with live complainants and guaranteed speaking time.

4) And by the people! Take two hours of airtime per week devoted to the broadcasting of a program (documentary, report, investigation, fiction, farce, etc.) made by people — young people for example — with the help of public service professionals: not even more expensive! And instead of buying at extravagant prices the broadcasting rights of international soccer cups with 23 year old players who risk infarction live, or cycling races with advertising riders whose life expectancy is less than 62 years? Well, a tournament of local soccer clubs from all over the French Community organized by a RTBF program (the winning club organizes a party for all the others) and the broadcasting of sports that are usually deprived of it. The positive people will anyway be able to make an orgy of advertising like soccer or cycling on TF1 which broadcasts the cups for the same price. Estimated cost: several million savings for the public service.

In order for a radio station to exist that serves its audience (invent others), it is necessary to start by undoing the advertising of the autonomous public company, because trying to build a decent radio station in an institution that has been plagued by advertising and marketing for 30 years is like trying to build a house on a minefield. As far as we know, the positive people who try this kind of adventure end up in dog food (available in supermarkets in 60 or 100 grams trays).