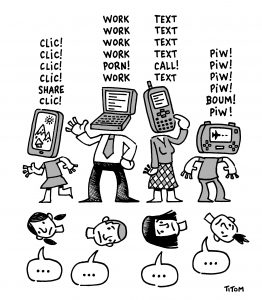 Who would have bet a kopek that attention, this so natural human faculty, would have been the subject of a specific conference in 2020? However, on February 1st, this was the case in Paris, where the first « Assises de l’attention » took place.

It is the concern and curiosity that motivated the organizers, a group of associations, both towards the capture of our attention by the digital giants (GAFAM), which has become glaring in industrialized societies, as well as towards its health, ecological, educational and (non-)democratic consequences. The two related sides of attention were considered: being able to concentrate and being considerate of others and the world in general. Among the anecdotes told, let’s remember this one, as it is so amazing: a maternity nurse reported that more and more women, just after giving birth, when their baby is placed on their belly, have as a first reflex not to touch it but to take a picture of it and immediately post the picture on social networks! She then explained the importance of the first moments, of each gesture to be given to the child, behaviors that seem natural but are less and less so in a society marked by the autonomy of technology.

Nearly 300 participants, temporarily disconnected, met on February 1 at La Bellevilloise, a former workshop converted into a cultural venue in the 20th arrondissement of Paris, to listen to specialists and practitioners, then discuss the question of the day: how to protect our attention from the dangers of screens? Three political demands emerged from this day: the end of advertising screens in public places, the banning of screens in nurseries, kindergartens and primary schools, and the launch of a prevention campaign independent of all conflicts of interest. To be continued…

In the morning, the first session of conferences concerned the question of children facing the screens. For Sabine Duflo, psychologist and founding member of the CoSE(1), digital technology creates a rupture between the child and his natural environment. Attention, language acquisition and behavioral disorders are on the rise, as are mental health problems. Parent-child attachment relationships are degraded while the specific needs of children are primarily existential security and language mastery.

Jean-Philippe Lachaud, director of research in neuroscience at INSERM, affirms that attention is an added value of the human being. The crisis that hit it was predictable, because more stimuli lead to a division of attention and a permanent zapping to not miss any opportunity, to reduce the anxiety of losing information. The screens also disrupt the intentional mechanisms. The smartphone has become a sensory organ and an additional sense stimulating the reward circuit and its dopamine pump. It makes the body disappear, soon reduced to two fingers, and atrophies the sense of space. Going in the direction of the hedonism dear to the postmodernists, the researcher notes that  » without attention, there is nopleasure ».

Teacher Karine Mauvilly returned to her concept of cyberminimalism, in the wake of her latest book (Seuil, 2019). In his pragmatic approach, failing to get out of the digital world, it is a matter of reducing as much as possible the time spent in front of the screens and choosing the least bad solutions that the market offers us, among others those that best protect our personal data.

Janine Busson and Jacques Brodeur from Quebec, pioneers of the

« Screenless Challenge », call to collectively take back the power over technology, to  » tame the time-consuming digital animal « . However, we must be aware that the opponent is a professional captologist who creates new symptoms such as the fear of missing out (FOMO), the fear of missing an important event. They accuse the School of ignoring prevention so as not to impede the march of digitization. For example, there are cases of kindergarteners sleeping with their smartphones, abandoned by elders who are  » deregulated in their parental function « . In closing, Brodeur challenged the silly cliché that  » you have to live with the times . Finally! The morning was closed by a round table discussion with representatives of the associations Alert(2), Les Chevaliers du Web(3), CoSE, Joue, pense, parle(4) and Lâche ton écran(5).

The afternoon opened with a round table discussion with Cédric Biagini, Yves Citton and Célia Zolynski. The first(6) gave us a politically charged presentation. The destruction of attention is the foundation of a new economic model driven by GAFAMs, both accomplices and competitors among themselves. The design, interfaces and notifications improve the performance of captology, the algorithms accompany our lives without the need for a subcutaneous chip since a smartphone is enough. GAFAM seeks to optimize, rationalize and intensify our lives through information and communication technologies (ICT), proposing new ways of being in the world and new social arrangements in the search for sensations and experiences.

The second, a professor of literature and media at the University of Paris 8, was, in our opinion, the surprise guest, given his ambiguous discourse, which is certainly not unrelated to his membership in the accelerationist movement(7). If he recognizes that attention is a common good, he immediately notes the positive role of distraction, for example in the case of hateful political propaganda, and glorifies the individualization that should be taken into account in the school environment.

The third is a professor of law at the Sorbonne. She deplores the fact that GAFAMs have become the sole guardians of our attention today. Let’s go further: they should not « keep » our attention in any way because they simply should not exist in a decent and truly democratic world!

The day ended with a last round table, more political, gathering the associations: D.Connexion(s), Écran total, Lève les yeux(8), Résistance à l’agression publicitaire and Technologos(9). Different but complementary approaches. This was followed by a debate on reformism or radicalism, the latter being the prerogative of the Écran total collective which, for example, communicates by postal letters for the sake of consistency with their analyses. This collective brings together people from various professions who are fighting against digitization in their work and in their lives. They are subdivided into targeted actions such as the Beauchastel Appeal for the refusal of the use of digital tools in schools.

The merit of this conference was that it brought together people from different political and professional backgrounds who were able to unite on specific and concrete objectives. Congratulations to the organizers for this success.