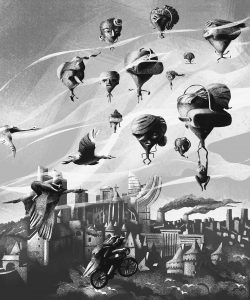 « …in the contemporary family in industrialized countries, the skills, not only of the father but of both parents, become obsolete during their lifetime, making it of little interest to them to pass them on to their children, even if the opportunity were available. »(1)

Postmodernity marks ruptures in several fields. In La condition postmoderne (1979), Jean-François Lyotard had not waited for the « digital revolution » to take note of upheavals, in comparison with the modernity we knew since the 18th century. Among them, the disappearance of the great structuring narratives on which the members of Western societies relied to give meaning to their individual and collective existence. Exit God, the King, Tradition, the Proletariat, Communism. What remained was Progress in the bastardized form of the all-powerful technician who was supposed to give direction to the world, as well as liberalism, which in the meantime has been given the prefix « neo » and which continues to impose its iron law despite being said to be in crisis(2). Smaller stories have been added: economic growth for material well-being, globalization giving birth to a multicultural society, with the frantic search for one’s identity (national, regional, sexual, gender, consumer, etc.) and above all individualism, which took a new turn in May 68, the consequences of which we are still paying for and understanding. It is the latter that we will focus on in this article, particularly its tendency to prevent traditional forms of transmission while substituting new ones, always presented as inevitable and beneficial, but which we will see above all as problematic.

My professional practice will come in here as a supplement. Born in 1963, I started teaching in secondary schools in 1988, well before the technological tidal wave that we know. The before (analog) and after (digital) are hardly comparable. For those who have not experienced the first order, the second will seem natural, despite the increasing stress it generates in individuals. And conversely, the difficulty of bringing the younger generations to a decentering of the gaze.  » Teenagers are always teenagers ‚ » I’ve often been told… So, nothing new under the sun? Would the teenagers of 2020 be the same as those of 1975? Of course, there are always some common points such as the propensity to rebellion, the bluster, the jaded air, the hesitant diction and the acne, but it is mostly the differences that strike (sometimes literally!). So let’s focus on these instead.

In my generation, we generally considered that adults, and therefore teachers, had something of interest for us that could not be acquired outside of explicit transmission. We recognized their social status and their exceptional position. Some of them, including myself, sometimes identified with one of them, attracted by his life experience, sought his company, even his complicity. When I had contact with them, incidental or not, outside the walls of the school, I felt mature, satisfied and even proud. This did not prevent me from enjoying the company of my classmates. In short, energy circulated between the generations and oiled human relationships.

All this has changed and, as an additional difficulty, we were not informed that there was a revolution in progress, as Jean-Pierre Lebrun tells us. Today’s teens often stay among peers(3). They no longer see their teachers as role models, let alone mentors. Their relations with them are considered under the double and contradictory angle of mistrust and game, knowing that a game can be sometimes amusing, sometimes violent, but always at the expense of his partner (forced, in our case), that one must rather consider as his adversary. Even more serious is the loss of attention, in both senses of the word: being able to concentrate and being considerate of others (cf. report of the « Assises de l’attention », p.17). Consequently, learning and human relations suffer. In between moments of fun, the « old » students were able to pay attention for sufficient periods of time to assimilate knowledge. The attention span of 21st century students is much shorter than that of goldfish(4): 9 seconds ! At the start of the 2019 school year, I have clinically seen a drastic shift in the first grade (12–14 year olds) classrooms. Let’s assume that we are dealing with the first generation with full cognitive and psycho-affective symptoms(5)The main causes of screen addiction are: weakening of the working memory; disappearance of the taste for true knowledge; hegemony of the present or presentism («  We are not interested in the past!  »); claim of rights without counterpart (duties); search for horizontality in the relations (cf. infra), supposedly for « democratic » reasons, which paradoxically leads to disrespectful, impulsive or transgressive behavior; disrespect for social rules, such as constantly cutting off the floor or not waiting one’s turn, signs of a lack of self-control(6) athazagoraphobia or fear of being forgotten by one’s peers; apathy or more often overexcitement. On the teachers’ side, all the out’s are in sight: burn, brown or bore, we don’t know in which order to classify them.

In his study on cyberaddiction, Dr. Philip Pongy talks about a « cyberaddiction » that is « a form of addiction ». pathology of emptiness  » with various causes:  » consumerism, media immersion, apology of action to the detriment of thought, decay of ideals and unconscious repressive instances in relation to the evanescence of family, societal and ethical references(7) « . He refers to a  » dementalisation induced by the connection having formidable consequences on the psychological development of the child. Introjection is hindered, perceptions are embedded to the detriment of representations, emotion takes precedence over feeling, acting over thinking, immediacy over elaboration(8) « . We are therefore very far from any « progress », although this is implicitly stated by the political decision-makers who, in the Wallonia-Brussels Federation, are pushing for the digitization of schools by invoking the Pact of Excellence(9). Such denial and irresponsibility leaves one breathless. While the best method to help a victim of addiction is to wean him/her off it, the decision-makers add a dose of screen time to the students, under the pretext of efficiency in communication — which remains to be proven — and adaptation to the world that is coming; to these pretexts will be added others in due course, notably educational. Everything will make flour to the bad mill of GAFAM.

FOR A REASONABLE VERTICALITY

Traditional « vertical » transmission is no longer popular, but « .. .wanting to get rid of all verticality — implying a place for authority, otherness and anteriority — is today the new version of excess(10) « , says Jean-Pierre Lebrun. On the other hand, in his conferences, the family psychotherapist Jean-Paul Gaillard invites teachers to get into egalitarian relations with young people — whom he calls with deference and complacency « mutants » -, an irreversible process according to him and in any case welcome in that it is the bearer of a more « just », more « democratic », more « equitable » world. For the first time in the history of humanization, elders are asked to adapt to the elders. Throughout my professional career, a member of Generation X(11) like me has been asked to take a back seat all the time, first to older colleagues when I was a young teacher in the 1980s and 1990s, and then to young people (colleagues and students) as I reach the end of my career! In this respect, I find that I was born at a particularly frustrating time.

Information and communication technologies (ICT) give their users the impression of having access to all of humanity’s knowledge at the click of a button. This  » age of access « , the first stage of the Internet in the 1990s and 2000s, has now given way to algorithmic governmentality(12). Certainly, in retrospect and in comparison, one would regret it. Nevertheless, on the one hand, it is misleading to make an equivalence between information, knowledge and learning, and on the other hand, it individualizes the appropriation of knowledge, whereas transmission is a collective phenomenon. Internet brings information, but only the human being is the bearer of meaning, an idea that the last generations cannot or do not want to understand or admit.

Let’s not reduce knowledge to intellectuality, there are also life skills, which are less, badly or not at all transmitted to children by parents, whereas they allow the construction of personality, sociability, as well as the mastery of daily life. The consequence for teachers is a double and exhausting mission to educate, mainly, and to instruct, if there is any time and attention left for that. And yet, not all teachers:  » What strikes the contemporary observer is a significant withdrawal of adults, parents or teachers, from the act of transmission in favor of freedom of choice and experimentation by oneself(13) « , observe Blais, Gauchet and Ottavi. Because May 68 passed by, with its pedagogical(14) and libertarian fads. The transmission of experience and knowledge is also weakened for several reasons. First of all, the social acceleration and the « real time » of the Web represent a major obstacle. Then, the explosion of fake news which leads to the phenomenon described by Hannah Arendt in her time: when lies and misinformation reign, the consequence is not that people believe any nonsense, but that they no longer believe in anything(15). Finally, a devaluation of the experience itself. When a 50-year-old is looking for a job, it has become useless and even counterproductive to insist on his accumulated professional experience, since on the one hand employers prefer to hire « professional » employees. unprejudiced  » (meaning malleable and not affiliated with a union), as one of them admitted to me(16) and, on the other hand, experiences become inconveniences when one is summoned to constantly adapt.

Does transmission have a future? Unlike the second, the first word is hardly used anymore by techno-progressives, but we can suppose that, forced to answer, the most fanatical among them would turn to cybernetics, this discipline developed in 1948 by the mathematician Norbert Wiener, which models the mechanisms of piloting, control and communication between men and machines. Except that it is a self-movement without human control, but which will redefine man as a purely informational being in an ultra-technical and ever more complicated system(17).  » In cybernetic capitalism, relationships between human beings appear [ainsi] as relationships between technological tools(18). Whether it is considered a rival or a friendly collaborator, the machine will always leave the human being on the side of the road, as François Meyronnis puts it:  » Confronted with digital networks and the advent of the world as a virtual unit actualized at every moment, human societies are thus assigned to catch up with the flows with the absolute certainty of failing — the flows outstripping humans in an ever more obvious way(19) ». While the sense of effort is lost in the political field, let’s note that the voters-consumers redouble it when it comes to staying in the technological race, among others. Isn’t there something else and better to transmit than ever more advanced procedures and technical skills? For example, the other constituent elements of our humanity: our soul, our life, our values, our memory, our ethical and political choices?