TOMORROWLAND: A RETURN TO A DISASTER 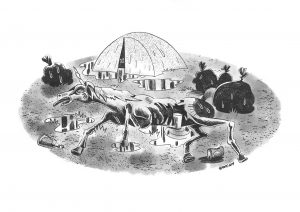 The summer period is favourable to leisure and uninhibited pleasures, it is also the period of repeated musical gatherings. One could literally speak of festival fever: several hundred events are held on Belgian territory every year. Among them, Tomorrowland holds a singular position for its programming, its installations, its decorations and its excessive character. The last edition would have attracted nearly 400,000 visitors in two weekends…

The unconcealed enthusiasm with which the associated media (Plug RTL, Radio Contact, Studio Brussel) relay this globalist party eludes certain fundamental questions. It is true that this event sends back images of « best of all worlds », with this human community communicating in joy and agitation on a music composed of a bass drum, samples and some fireworks sounds… It’s so beautiful, it glitters and sparkles all over!

So why should we talk about the intrinsic poverty of the music offered? Let’s let the connoisseurs of real electronic music talk about it… Why would we mention the huge fees received by these star Disc Jockeys (Guetta, Vegas, Ganacci…) wrongly qualified as musicians? Why would we adopt a classy reading of this event even if, with a day ticket fixed at 105€, it goes without saying that this festival is aimed at a « privileged » public? To mention these aspects would be trivial… Don’t the organizers have the noble claim to offer a daydream to those who can afford it?

However, we feel obliged to stop our reflection on an imperative point: at a time when the environmental question is animating our consciences like never before, isn’t it time to return to events with a human dimension and to impose some drastic rules to the organizers and festival-goers?

Tomorrowland is certainly a machine to make huge profits, it is certainly not for nothing that Jupiler, Miele, Carrefour, ING and many others are profiled as official partners and are jostling to make their prints visible. It is also true that this festival occupies several thousand people throughout the event. But beyond the very favorable economic indices for the organizers and the numerous spin-offs for the investors, the environmental impact of this mega festival is heavy, very heavy.

Note that the organizer invites festival-goers to  » respect the sacred lands of Tomorrowland and Dreamville and respect Mother Nature « (sic). Unfortunately, the message is too cryptic to be fully integrated by the audience. This awareness is measured at the end of the festival. Once the site is depopulated, a huge carpet of waste covers the vast meadows of Boom. It is neither more nor less than a gigantic dump made of plastic bottles, cans as empty as full, food packaging, cans, shower gels, fancy objects… One can only be surprised by the lack of willingness on the part of the organizers to maintain this natural space in an acceptable state of cleanliness. While a David Guetta will receive several hundred thousand euros for a stage performance that we prefer not to comment on, the organizer seems reluctant to put in the effort to ensure a valid and efficient waste sorting throughout the festival. Boom lands are suffering. No doubt nature will need a year to recover from the event. This suffering is not entirely the fault of the organizer, the festival-goers are also accountable. What are they doing if not abandoning to its sad fate a site that has become dirty because of their unique lack of common sense?

The festival-goers are not only careless, they are also disinterested: hundreds of personal effects are literally abandoned on the site: clothes, towels, fridge boxes, sleeping bags, tents, floor mats, air mattresses, camping seats, objects that for the most part will have been used only once… Here again, the organizer shows a rare complacency because no one is obliged to fold up their gear and deposit it in a collection point. It clears itself by subscribing to partnerships. This task of clearing will be done by volunteers present on the site whose eminently useful function will consist in recovering the camping material thus limiting the destruction. But here again, the system does not meet the needs. Due to a lack of manpower and volunteers, a significant amount of material will be picked up with a shovel and sent to the waste disposal center.

Tomorrowland, concerned about its image, asks these volunteers not to spread the pictures of the site on social networks… We are far from the enchantment of the lights and the pyrotechnic show of the day before. The next day, the excess has another side.

It would be interesting to establish the complete carbon footprint of such an event: 400,000 festival-goers, of which more than ten thousand left their country by plane, an unprecedented consumption of water and electricity, unlimited logistical and material means for the implementation of the infrastructures, Tomorrowland symbolizes the ecological cost of mass entertainment in the era of globalization.