TIC(E) : THE PASSAGE IN FORCE 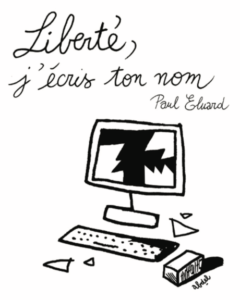 Let’s start this article with a true cliché. In terms of « progress », the United States continues to set the pace: some 40 states have decided to make handwriting instruction optional in elementary school; instead, computer keyboarding will be favored(1). In our country, the minister M.-D. Simonet intends to maintain the two types of writing on an equal footing. Until the next legislature? A school polemic is perhaps in sight, given the eagerness of certain institutional and private actors to digitize the school at a rapid pace. Carried by the ethics of responsibility, some claim the necessary adaptation of teaching to technological changes(2). Well-meaning dialecticians see this as a ruse to « double-cross » the tutoring companies: as soon as the school is digitized, it will no longer fear competition from them, which will no longer be able to boast of offering tools that are more effective — interactive — than the « mono-passive » blackboards. Thus, a student who is ill will be able to follow courses at a distance on the Internet platform of his school, which will ensure the « continuity of the pedagogical link », the possibilities of academic success and the equality(3). You don’t have to be paranoid to guess what happens next. Why stop at sick students? One day, everyone will be taking courses remotely, without knowing the emotional impact of a live class. By transferring content to mobile tools, the power will dematerialize the school as a place of gathering(4)This will progressively make teachers and their training obsolete, until their status is finally liquidated. Nothing new under the sun of neoliberalism, and now of cognitive capitalism(5).

The debate on information and communication technologies in schools (ICTE) is taking place between ICTE fanatics — geeky teachers anticipating the wishes of management — and ICTE sceptics, progressives who see it as a « natural evolution » too massive to be slowed down, but who remain cautious as to how it will be applied(6). All of them are in tune with the spirit of the times, unlike the few heretics who doubt the thevery merits of ICTE. I am one of those who claim that technical development is not « neutral »; it carries with it values and societal projects that may not be desirable. « Each technical innovation is much more than a means; it is a cultural power […]. Technologies shape feelings and shape worldviews. The spiritual traces they leave are probably deeper than the material traces. »(7) It is not enough that the technological arsenal falls into « reasonable » and « responsible » hands for everything to be better. It would just go a little less wrong a little less quickly. But faith in progress is hard-wired! Philosophically, it is the whole question ofhubris and the capture of society and nature by technoscience. A cultural metamorphosis would be necessary, but the « neo-domestication » of man by technologies and economy is a powerful brake(8). As Jean-Jacques Rousseau said, the question of technique has absolutely nothing technical about it. The social uses of science and technology is a question that citizens have the power and the right to appropriate. Two recent books help us to see more clearly.

In The digital hold (9)Cédric Biagini describes the machine-world that the technocaste is preparing for us, relying on our passivity or on our enthusiastic awe (e‑book, Facebook, new technological utopias, the myth of the e‑revolution, etc.). He shows how ICTs bring libertarian theories up to date, how capitalism, by going digital, will become even more powerful, and finally why machines will take over from human beings, pulverizing any hope of democracy and erasing centuries of humanism to end up with the cyborg, the « human being ».augmented man » through the convergence of nanotechnologies, biotechnologies, information and cognitive sciences and synthetic biology (NBICS). A chapter is devoted to the invasion of ICT: touch tablets, interactive whiteboards, digital textbooks and digital workspaces, ICT in which students and teachers will be enrolled, because  » the absence of mastery of computers and various technical prostheses amounts to [donc] marginalizing oneself, to excluding oneself from the system of production and, above all, something much more decisive, from that of consumption and the ersatz social life that prevails today » (p. 140). Exposed in the novlangue of the Fourgous report(10) in France, these technocratic choices are not a matter for political discussion but are imposed in the name of global economic competition, in which the knowledge economy and the immaterial economy(11) are expected to play a leading role since the launch of the Lisbon Strategy in 2000. This narrow utilitarianism of the school undermines its role of socialization and transmission of knowledge in favor of what becomes competence(12) the most valued: the ability to adapt to constant technological and economic changes. Traditionally considered as a tool for the emancipation of people, education is now seen as one technique among others to adapt to the neo-management that awaits future employees(13).

ICTE is also part of the commodification of education. Examples. In February 2013, Apple Education Belgium offered training « to enable teachers to take ownership of new technologies and use them in the classroom, » a way for the company to capture the huge education market by luring teachers. The Digital School project includes  » training teachers in the use of the ipad, through the appropriation of the language of advertising to express their vision of the world in images and online. » (14) [c’est moi qui souligne]. On the teachers’ side, we will witness their proletarianization, i.e. the weakening of their autonomy and the disappearance of their know-how, to the point of their demotion into  » digital animators » (pp. 150–154) or « e‑learning resource persons »(15)whose authority will eventually vanish for good, as a consequence of the horizontality of the network society(16). On the students’ side, the situation is not much better: « By conditioning individuals from a very young age, including in the school setting, to the use of new technologies, we prepare them to be perfect consumers, in the sense of buyers of course, but also of frenetic users of high techobjects . The gradual replacement of textbooks and paper books with digital versions will no longer leave students with the opportunity to experience worlds other than those produced by the bit merchants. » (p. 149). We are witnessing a disturbing cognitive evolution: adolescents are zapping and jumping (17) They are constantly on the lookout for visual stimuli and events that prevent them from concentrating; they live exclusively in the present moment, in a hurry; they have difficulty getting inside themselves. These phenomena announce that interiority, which makes individuation and socialization possible, is becoming a dimension that is difficult to access and/or neglected among young people. ICT is a powerful gas pedal of the destruction of attention(18). As young people consider the world from a playful point of view, companies have developed « serious games » that integrate an educational scenario into a video game, a perfect example of « edutainment », the fusion of education with the leisure industry. As the simplism of 2.0 procedures spreads in schools, what room will be left for the orphic aspect of existence, namely imagination, poetry, language, discursive argumentation, aesthetic sensibility, emotion, moral autonomy, all that makes up our beautiful subjectivity, our troubling singularity, our unfathomable humanity? 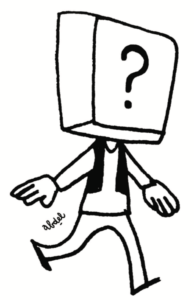 In his latest essay(19)Raffaele Simone describes these recent upheavals in the processes of cognition, noting that « […] we find ourselves in the midst of an unparalleled cultural storm, the outcome of which no one is able to predict » (p. 29). The  » digital natives  » that are the young people born after 1990 have grown up immersed in the mediaphere (television, computer, web), which has become a formidable competitor to education that « has changed our minds, our intelligence and their operations » (p. 31). Linear listening, in favor before printing, and alphabetical vision, dominant since printing, have been replaced for the last twenty years by non-alphabetical vision. We have moved from a sequential intelligence — that of reading — to a multisensory intelligence — that of the mediaphere. Enjoyinghomo videns is overtaking ascetichomo legens . Simone also speaks about « derealization » of the world by the digital, i.e. the dissolution of the real object (pp. 218–228). As a sign of the times, teachers have noticed that students, when visiting museums, prefer to « discover » their content on screens rather than looking at the real objects displayed in the windows. The school is less and less considered to be the source of knowledge, as information available outside the school becomes more prevalent. Three options are then open to us, its actors: either, as good cynics, we are about to close the store and recycle ourselves by sending our C.V. or we put the school in tune with the mediaphere — and this seems to be the choice made by public authorities under the influence of fashionable ideology and/or pressure groups; or we assume the fact that education « within the walls » contains its share of pain, patience, repetition and even boredom, is slow on the cognitive and methodological levels, but that the knowledge it provides is in a structured and systematic form, linked to historicity, whereas that of the media sphere is fragmented, disjointed and anhistorical Finally, let’s be a bit utopian: the school should become a repository of philosophical ideas and practical knowledge that will be very useful to us one day, when civilization(20) industrial will collapse for good. During During these hard days, reality will make its smashing return and will sweep away the virtual chimeras which had ensured the anthropofacture of the recent generations, which, suddenly weaned from their digital prostheses, will find themselves totally deprived…

CALL FOR AN UPRISING OF CONSCIENCE AGAINST THE MACHINES

It is time for the School to reinscribe its action in a humanist ethic, rather than a utilitarian ethic in which it has been mired for the past thirty years, when the European Round Table of Industrialists (ERT) began to meddle in the teaching(21). It is time for it to be repoliticized in the face of a policy driven by management objectives and instrumental rationality that (con)forms normopaths(22) on the line. It is time that instead of slavishly adapting, it learns to anticipate, that it refuses to bow to technology left to its own devices, which knows no principle of self-limitation. ICTs have both standardizing and unequalizing effects, in addition to placing agents in heteronomy(23). Those to which the economic elites want to train the learning mass of the public school amounts to « giving inferiors just the degree of knowledge that conscientious obedience demands », according to Proudhon’s analysis, still relevant today. If there is no reaction, society will slide into a form of technological soft totalitarianism, and the School will have done nothing to prevent it. On the contrary, it will have contributed to it by ratifying  » the gap between the formidable mechanism of scientific-technical-industrial invention which does not cease to impose ever more rapid mutations to these societies, and the relative absence of social invention, the citizens being limited to undergo the mutations which are imposed to them ».(24)