THIS IS NOT A PEDESTRIAN AREA 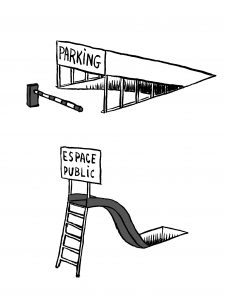 On June 29, « Europe’s largest pedestrian mall » and its new traffic plan begin to be implemented. More than ever, the City of Brussels is burning the midnight oil. But be careful: this pedestrian path is not a pedestrian path…

The Platform Pentagone brings together residents, shopkeepers, workers, users and associations for whom a pleasant, lively and attractive city is first and foremost a city inhabited. Without disputing the concept

of pedestrians in the city, they call into question the mainly tourist, event and commercial vocation of the City of Brussels’ project which, far from offering a redeployment of the public transport offer, gives priority to automobile accessibility. Here are excerpts from the Platform Pentagon’s charter, which calls for the redefinition of this pedestrian area for the benefit of downtown residents and merchants, and their quality of life. That is to say, by reducing rather than increasing the nuisance.

Yes to a shared public space that improves the quality of life of residents!

No to the privatization of public space!

The Pentagon Platform wants a shared public space that respects the variety of publics, functions, uses and modes of travel as well as safety. The vocation of the public space freed up by a pedestrian walkway must be reoriented. The privatization of public spaces in the hypercentre is becoming commonplace and is already a cause for concern (concession of public space to private operators in order to organize advertising and commercial activities). (…)

(…) Comparative studies on a European scale show that the implementation of this type of pedestrian walkway accelerates the process of specialization of shops, almost exclusively favoring restaurants (cf. rue des Bouchers), candy stores (cf. Grand Place), clothing and shoe stores (cf. rue Neuve) or perfumeries. These pedestrians thus lead to the disappearance of businesses of goods necessary to daily life (…). These pedestrians favor the large chains, with franchise contracts, but are unfavorable to independents, local businesses, and services. (…)

Yes to improving air quality! No to more pollution!

The first benefit of pedestrianization should be to help reduce automobile traffic throughout the Pentagon and on the inner ring road. But the pedestrianisation as conceived by the City of Brussels (…) will encourage car traffic and will further degrade the air quality, which is already very bad in the Brussels region (…).

According to the scientific literature, one of the main contributors to air pollution is vehicular traffic. Currently, long-term exposure to fine (PM10) and very fine (PM25) particles is the main health risk from air pollution. It is estimated that this exposure leads to an early deterioration of life of 1 to 18 months in the Benelux. The effects of air pollution affect mainly the respiratory system (…) but can also be carcinogenic (…).

Yes to a mobility that reinforces public transport and active modes of travel (cycling, walking)!

No to the increase of the automobile pressure around the hypercenter!

The formation of a mini-ring road between the inner ring road and the hypercentre will have the consequence of maintaining a high level of automobile pressure on all of the Pentagon’s neighbourhoods, since the traffic currently using the boulevards in the center will be transferred there. Worse still, the creation of new parking lots along this mini-ring will generate additional flows, by serving the new pedestrian and shopping area right next to it! (…)

Yes to accessible housing throughout the project area!

No to real estate speculation!

The transformation of the central boulevards into a pedestrian area dedicated to events and commercial attraction is likely to produce an increase in rents throughout the area. The City of Brussels says it wants to attract a new « creative class » in its commercial development scheme. Tools are needed to control rent increases. In addition, the Régie foncière and the CPAS of Brussels must formally commit to maintaining the rents and their current occupants, including in the commercial cells, and to providing sufficient social housing. (…)

Yes to improving the health of all residents! No to noise pollution!

Noise is the main pollution of the senses. Noise pollution often has non-reversible effects on the ear (reduced hearing or even deafness), on sleep (a noise of 70 dB wakes up almost everyone), but also on cardiovascular or hormonal health, or on intellectual development or behavioral disorders. Many residents have been complaining for years about the serious nuisance caused by mega-events such as the Plaisirs d’Hiver, the Brussels Summer Festival, and by the numerous bar terraces open late at night, especially in Saint-Gery. Given this experience, the prospect of a large pedestrian event space is very problematic.

In the Brussels Region, in 2013, 49% of the Brussels population (aged 15 and over) is bothered at home by at least one of the sources of pollution (mainly noise, vibrations, air pollution, bad smells), compared to 27% in the Walloon Region and 23% in the Flemish Region. (…)

Yes to a real public consultation and a thorough impact study, as provided for by European law and covering the entire plan!

No to the absence of debate and the lack of serious preparatory studies!

One can imagine that a project of such magnitude, with such significant impacts (not only for the neighborhoods directly concerned but also for the entire region and beyond), has been the subject of in-depth preparatory studies and debates with all stakeholders. This is not the case! On the contrary, « we did everything backwards » (Yvan Mayeur, mayor of the city of Brussels)! The City wants to move forward quickly and has adopted projects with little or no preparatory studies. (…) Contrary to European law, which states that urban development plans must be submitted to the European Commission for approval, the European Commission has decided to submit a proposal to the European Parliament and to the Council of Ministers:

- and public participation early in the process.
the procedure, i.e. « when all options and solutions are still available », or in other words « before the plan or program is adopted or submitted to the legislative procedure ». (…)

Relay of the fight of the Platform Pentagon, more info on www.platformpentagone.be