The war against coronavirus cannot be won 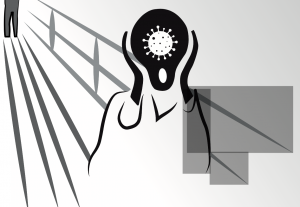 On March 16, in a televised address that will have left its mark on people’s minds, the French President announced that his country was going to war against an unknown enemy, a coronavirus, officially named SARS-CoV‑2. The tone was set and almost all European countries, albeit in a less theatrical manner, adopted the same martial posture. The obvious objective was to convince the population of the imperative need to close ranks behind the governmental staffs and to adopt without protest the coercive measures, judged indispensable by these same staffs. To give credibility to the discourse, policy makers have created an ad hoc structure where experts supposedly speak on behalf of science sit. In Belgium, it is the National Security Council (NSC) which, throughout these last months, has decided and announced the rules of the general mobilization supposed to lead to the total victory over a devious and deadly virus.

It must be said that the mobilization was not self-evident after the soothing words and the total absence of adequate initiatives throughout the previous 2 months. While the Chinese government reported the first case of Covid-19 disease to the WHO in December 2019, it was known as early as January 2020 that the city of Wuhan was home to an outbreak. At the end of the same month, a few cases announced in Western Europe are minimized by all governments. Belgian Health Minister Maggy De Block says  » the situation is under control, experts are following the situation closely, there is no reason to worry . »

In China, the containment was decided at the beginning of February, with an arsenal of drastic measures supposed to prevent the spread of the virus. For European governments and the European Commission, the epidemic remains remote. In short, this is a localized epidemic and in no way a pandemic. On February 21, a 78-year-old man who had not been to China died in Italy and, the very next day, 32 new cases were declared in Lombardy; the following day, 100 new cases were reported and a third death was declared. The pandemic potential of the new coronavirus, announced by some experts, seems to be well confirmed, without however moving the European public health « leaders ». It is already clear at this point that cordon sanitaire-type decisions are urgently needed to prevent the pandemic:

Nothing was decided in the very short time that was needed. To allow the dissemination of the  » deadly enemy « , in the name of freedom of movement, was irresponsible, imprudent, economically and socially catastrophic.

Declaring three weeks later the absolute primacy of health over all other considerations to justify the total confinement of the population and the paralysis of all sectors where human contact is essential became the solution. This was mainly to cover up the public unpreparedness for a pandemic:

It was above all a question of avoiding hospital overcrowding, which could only be achieved in our country by concentrating all efforts and resources on the war against the coronavirus. Therefore, the treatment of any acute or chronic pathology became secondary. The consequences of this policy for the health of many patients have not been evaluated, which makes it possible to conceal them, at least for the time being, without forgetting the collateral effects on the nursing staff, who are subjected to a great deal of overwork and permanent stress.

A few months later, we are still at war. Hospitals have been emptied and deaths have been reduced, but the virus is still with us. And it’s still circulating.

The provisional balance sheet is not exactly glorious for the governmental staffs. It was known since Rudyard Kipling that the first victim of a war is the truth. This has always been true and is more true than ever today.

Since the virus is still circulating, the answer that has the support of European governments is, in a few words, that the measures taken so far were necessary. The citizen is afraid, so he accepts the restrictions to the freedoms imposed in his daily life, as long as they appear reasonable and do not prevent him from living his life as a docile consumer. So much for human relations and social relations; it is enough to maintain them at a level bearable by the active population while convincing them that we are acting for their own good… while waiting for the saving vaccine. Brilliant teams of researchers are developing it. Hope is at the end of the tunnel. You have to be patient; it’s just a bad time to pass.

This reasoning is, in my opinion, both erroneous and dangerous. Moreover, it is unacceptable if we want our children and grandchildren to live happily in a society of freedom, responsibility and fraternity, that is to say, the exact opposite of the one that is being proposed to us supposedly for our good.

Let’s start with the promise of a miracle vaccine that should be available in a few months; this is a pernicious fable and serious scientists know it very well. A quick look at the history of the most recent communicable diseases (HIV AIDS, Ebola, Dengue, Chikungunya) shows how unlikely it is that a vaccine will be developed quickly. The WHO website presenting the list of available vaccines shows that no vaccine is operational for these diseases. As for SARS and MERS, the two coronaviruses that emerged in China in 2003 and in the Middle East in 2012, there is not even the slightest reference to them in the list of vaccines in development. So how could it be otherwise for SARS-COV‑2?

But perhaps we should be so optimistic as to forget common sense. In any case, even if a vaccine were developed, its effectiveness would be short-lived, given the rapid mutation of this type of virus.

We must also be very vigilant with regard to the practices of the pharmaceutical lobby: there is a real risk that the pretext of urgency will be used to launch a vaccine on the market that does not meet the required safety criteria and will ultimately prove to be more dangerous than the virus.

Let us then turn to the measures restricting fundamental rights that are imposed on us. They are acceptable in the event of an emergency in the face of a serious crisis; however, they cannot be allowed to continue and move insidiously from the temporary to the permanent. The malaise is already very deep in the society. Constraints aimed at limiting social and even family relationships to a strict minimum are less and less understood and will very quickly be refused or bypassed in the face of an invisible health risk. It is not acceptable to prevent children and young adolescents from living a normal life. They need contact, games, learning together, physical activities and sports. We cannot rob them of their youth in the name of so-called health protection for the elderly. Nor can we protect the elderly at all costs, including by condemning them to solitude. It is high time to question a policy full of contradictions and whose effectiveness is difficult to see and even less to understand.

How can we understand that wearing a mask is now mandatory in the open air, when it was considered useless, even counterproductive, at the height of the health crisis? How can we understand the absence of measures to restrict certain industrial activities that are known to be sources of contamination? This is clearly the case for slaughterhouses, where many cases have been documented. This is also the case for long-distance transport of confined live animals.

Doesn’t all the talk of a possible second wave do more damage to health than the virus? Clearly, everything points to the need to change course and abandon the pipe dream of eradicating the virus. No, we will not win the war against the coronavirus! We have to admit that we will have to live with it because it will be part of our environment, just like the countless viruses that have been around for a long time, such as the seasonal flu.

And if we finally decided to approach the problem differently. Rather than relying on a specific response to a virus that we know little about, would it not be more realistic and effective to strengthen the immune system of the population? History tells us that individuals with weakened immune defenses are the most vulnerable to viral or bacterial attack. The ravages of the Spanish flu in 1918 were largely caused by malnutrition and harsh living conditions during four long years of war.

It is time to launch a proactive campaign to strengthen the immune system of our citizens:

At the same time, it is necessary to program the dismantling of industrial activities that favor the emergence and dissemination of pathogenic viruses, i.e., industrial breeding, international trade in live animals, and productions that involve the systematic deforestation of vast wild areas (palm oil and soy).