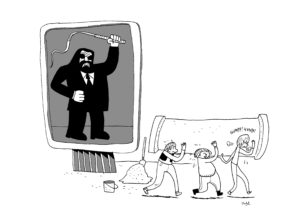 The trade union show can often generate the impression of an unconditional defense of employment, at the cost of nature, human freedom and social harmony as a whole. Caught in constraints, partly resulting from historical conditions, the worker is then confirmed in his condition by the one supposed to represent him. How then to reconcile the defense of his rights, to ensure him a decent life, while offering to this world sustainable perspectives, in the long term.

» Maurice, remember that you are not the only one to benefit from the fruits of this extraordinary growth, there are also employees who have contributed to it and we should not forget them, because they also contribute to the wealth of the group. This is the message that an employee of the Publicis group, a « creative », elected CGT and staff representative, sent to his boss, Maurice Levy, reproaching him — quite rightly — for the astronomical bonus (16 million) that he had just pocketed(1). This excerpt, taken from a France Inter program devoted in an ironic tone to the criticism of the greedy boss of the « com » company(2)This is a good indication of the form that the trade union struggle can take, which in this case, far from attacking a model of society, merely expresses the desire that the fruits of the company’s growth be better shared. But if the employees’ demands were met, could we still think that we are now in a more decent, fair and egalitarian society?

It is legitimate to ask the question: how will we get out of this unsustainable model of society if the evil is not attacked at its root, if the critique is not radical, in a system where the relative satisfaction of workers’ demands has required increasing productivity, generating globalized division of labor and unbridled competition? Without a real questioning of the meaning of work, and by totally ignoring the natural limits of extractivism, can’t the struggle, paradoxically, work to ensure that the system of exploitation continues…? If a trade unionist fights to maintain what oppresses and alienates — the advertising industry — the foundation of our capitalist societies, just for the sake of a wage increase? Publicis, which has made advertising its core business, retains a function that remains intrinsically harmful, even with a fairer distribution of profits. There is no possibility of safety, even with « satisfied » and « well-paid » employees. « But this does not exclude taking into account the foundations on which the advertising industry rests, those of a consumer society where the productive system generates false needs that are necessary to ensure the continuation of production, colonizes all living spaces, denatures landscapes, establishes competition, ostentatious comparison, the spirit of the brand and the feeling of lack from the youngest age, subordinating everything to its ultimate project: to commodify the whole of living spaces(3).
Under the pretext of not alienating the worker — the « proletarian » — the « fighters of the left » postpone indefinitely the deconstruction of the system and propose struggles that in themselves perpetuate the alienation. Should we fight just for our job (« Don’t touch my job ») or for a salary increase when it comes from the advertising or car, petrochemical or arms industries? Those who think so, as François Partant said, « without realizing it, [ils] are the best defenders of the capitalist system »(4). Avoiding the question of what is produced, how, for whom, and the sustainability of this production, the worker, caught in a consumerist society, often in debt for his housing, his car, his vacations, and the various goods promoted by advertising, having to pay for his children’s schooling, eating every day … the worker is therefore cornered and no longer has any real choice. Let’s be clear: he is both a victim and responsible for his situation.

For many who claim to be part of the « radical left » and the trade union struggle, the fight for jobs is a « necessary passage ». In so doing, these advocates of the « wage strategy » often come to justify the maintenance of an activity by paradoxically resorting to the same « globalist » diktats that are used by those they hate and criticize — the big bosses, shareholders, politicians, etc. Thus, a French journalist, responding to a review of Pièces et Main-d’œuvre(5) who reproached him for defending the « French cancer » in a radio report, took up the famous refrain « if it’s not me, it’s the other one » which the leaders happily use in order not to change, while continuing to make us believe that they change everything:
« But if these ten plants were to finally close, what would be the consequences? The safeguarding of the environment? Less pollution? The end of cancers — as you announce? I doubt it. We will probably see a simple « displacement of activities », as in so many other sectors, such as for tanneries, as for the recycling of computer waste, and this industry will take refuge under more clement skies for toxic waste, in China or elsewhere. »

It is therefore a question of postponing radical change under the pretext that rethinking certain productions would lead to their relocation under much worse skies, while shareholders and company managers play on social and environmental dumping to select the most suitable place for their profit. When we denounce the absurdity and indecency of maintaining an arms factory (the Fabrique Nationale de Herstal, for example) in the name of employment, the opponents of the employer’s order, who refuse to recognize that they sometimes obey the same arbitrary rules, including those of competition and the growth of the rate of profit, retort exactly the same thing: « if it’s not us, they’ll do it elsewhere. No doubt… but at the extreme, the pimps of the brothels of Jakarta and Shanghai who make children work to satisfy the sexual appetites of their rich clients will be able to provide the same answer, the one that prevents from asking the question of the values, the incidence and the meaning of the job one is doing? Can we continue to manufacture cars, weapons, nuclear warheads under the sole argument that others will do it if we stop! Until when then? And who will stop the first? This will shock some people, for sure, but it is essential to ask the question?

It is certain, however, that by perpetuating the existing order and offering combative nourishment to alienation, the unions will more easily gain the favor of the workers. Increased purchasing power and unconditional defense of jobs are more attractive than a struggle that involves a fundamental questioning of what the worker produces and the fundamental reason for this production. Union promises are all the more tempting when work allows the consumption of goods that justify work in a consumer society. And as this struggle, very often,  » comes from a Manichean vision of society, which would be divided into good guys and bad guys, only the former (the workers) having legitimate interests and healthy aspirations, which could be satisfied if the bad guys did not oppose them « (6)There is a serious chance that anyone who criticizes productivism will initially be considered « bad », like the boss who « downsizes ». It will be retorted that this is a petty-bourgeois intellectual position of one who can afford to think like this, being far from the afflictions of the working world. This must, no doubt, be true at times. But to sweep this criticism under the rug would be to refuse to see that behind the opposition between worker and boss there sometimes lies the defense of common values, but also to consider the worker as a being who finds his only interest in the unconditional defense of his job and his purchasing power, and, in the end, to perceive behind the worker, the employee, the laborer as only a… worker, where there is first of all a human being.

Fortunately, present examples contradict this fixed vision of the worker. In Taranto, Italy, residents and workers fought against their company, declaring that their lives were worth more than their jobs. In order to do so, they had to oppose the  » trade union centers — CGIL, CISL, UIL — [qui] are walking hand in hand with the boss, Riva, the third largest steel producer in Europe. Together, they are defending their death machine against a judge’s July 26, 2012, receivership order for public health reasons « (7).

In Seraing, Belgium, on the other hand, some of the statements made by Arcelor Mital workers bluntly expressed the imposing priority given to employment, defended at the cost of instrumentalizing nature:

» It seems clear for the moment that the management wants to maintain the coking plant in Seraing. This may seem like a curious intention, industrially speaking, since without a blast furnace, there would be no need for this infrastructure. In fact, with a little hindsight, this famous coking plant could even become a means of pressure on the multinational. How do you do it? Essentially, by the fact that a coking plant is an extremely polluting tool (it is the place where coal is cleaned by pyrolysis before being fired with iron ore). Gases are released with tar, naphthalene, ammonia and sulfur. Hence the difficulty of obtaining an operating permit for a coking plant « (8)…
To fight to perpetuate the activity of Arcelor Mital, Publicis or the National Factory of Herstal, is in a way to fight against oneself, it is to choose between life or employment. Wage struggles as they are mostly taking shape today are insufficient and, paradoxically, are part of the model of society they claim to criticize. To change this, it is the very order of production that must be attacked, by fighting in particular to benefit from a decent unconditional income after having lost a job in the service of an indecent production.

A project for society that takes into account the dimensions of man and nature will therefore necessarily require a rethinking of the meaning to be given to work and an obvious confrontation with the short-termist, productivist trade union dogma. Because always postponing radical struggles to a later date, union positions can indefinitely turn out to be an instantaneous reflex defense, where the choices are paradoxically made by the one whose decisions we thought we were thwarting: the boss. It will be necessary for one or another geographical entity to take the initiative; to admit that without emulation, without the first one starting, change will not be possible. And we must believe, and hope, that the first will encourage the others. Because there is much to be gained from living in a simpler, healthier, more united society, in harmony with nature, where we no longer live to work and consume, but where we work to live.