THE THREE FORMS OF RELIGIONS 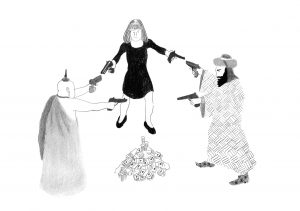 We have seen in a previous article(1) that those who need to frighten their populations, in order to keep them under their domination, have invented the threat of the war of civilizations. This threatening war, which they want people to believe will last forever, is imagined as a consequence of the confrontation of different cultures based on religions considered irreconcilable. However, if we take a closer look, in our globalized world, all religions today are declined according to three modalities that are ultimately very similar.

Raphaël Liogier is a sociologist whose research focuses on the mutation of religious identities, particularly in the current context of globalization. He is therefore well placed to know contemporary myths, individual and collective imaginary constructions and their political and social consequences. He studied Buddhism(2), secularism(3), Islam(4) and compared them(5). In a recent book(6), he puts forward an argumented synthesis that casts a more than serious doubt on the theses of those who claim that the small number of great civilizations, and the religions that underlie them, can only oppose each other in violent conflicts.

Of course, there is no question of denying that multiple identities exist and that these  » But globalization, with its common languages (scientific-technological, English…), with permanent exchanges (commercial, student, tourist…), standardizes the planet and makes the other no longer unknown, distant and frightening. In particular, religions, which are supposed to separate human groups in an irrevocable and irreducible way, in fact share common developments. In the end, the harshest divisions are experienced within religions and not necessarily between them. Thus, we can identify three major polarities that run through all religions.

In each religion, we can find the same ways of living our beliefs.

1) Charismatism emphasizes emotion, experienced in a collective way. Today, it is the majority in Protestantism (at the global level) with the neo-evangelical movements whose influence, often negative, is well known, especially in the United States and Brazil where they have largely contributed to bringing to power extreme right-wing leaders (Trump and Bolzonaro). The charismatic renewal is also active within the Catholic Church. Less known are the Buddhist charismatics (the Söka Gakkai movement) or the tele-coranists who, in Egypt, copy the evangelist pastors that abound on American TV channels.

2) Fundamentalists are those who adopt and develop excessively the theses of the clash of civilizations. One knows (and hates) of course the Muslim neo-fundamentalists whose hated figure is that of Bin Laden and his jihadist emulators who have implemented, on their scale, the war of religions. The Salafists, fortunately less warlike but isolationist, share this option. But there are also fundamentalist Catholics in Western Europe, rabid Orthodox in Russia and ultra-Orthodox Jews who would happily slaughter all the Muslims in Palestine if they were not (usually) prevented from doing so. While it was believed that Buddhism, a philosophy rather than a religion, was spared from this drift, the horrors committed by Burmese Buddhists against the Muslim minority of Rohingya forced us to note that no one was safe from this sectarian drift.

3) Fortunately, within each religion, there are spiritualist currents that cultivate their faith but without considering it as a war machine against other varieties of belief. Thus, one finds in the thinking of a Muslim neo-Sufi quite a few points in common with what a Westernized Buddhist believes.

These ways of believing are in fact reactions to an original evolution that has only appeared in the last century. In developed, industrial or even recently post-industrial Western societies (those that have shaped the world today), a secularization is affecting an increasingly important part of the populations. In Western Europe (especially Scandinavia and French-speaking countries) many people call themselves atheists. If they have rejected the traditional religions of their countries, this does not mean that they no longer believe in anything. In the 60’s and 70’s, we saw the development of the so-called New Age movements which borrowed a lot from Eastern spiritualities in a joyful mix. This religious zapping no longer remained a minority and, little by little, it influenced a large part of the population. Today, among the privileged classes of the West, yoga, tai chi, meditation, neo-Buddhist, neo-Shamanic practices… are conquering increasing shares of the spiritual market. In the less economically privileged areas of the world, it is only minorities, the winners of neo-liberal globalization, who adopt such spiritualist options.

In varying proportions according to the degree of economic and social development, those who are still integrated but feel very insecure adopt charismatic beliefs (Pentecostals in Latin America, evangelists in sub-Saharan Africa, etc.) and those who feel excluded (whether individually or collectively) opt for fundamentalist postures (particularly in the Middle East, which has been in the minority since the fall of the Ottoman Empire, or second- or third-generation North African immigrants in Western Europe). There are so many varieties (neo-Kabbalists, a thousand variants of Westernized neo-Buddhism) often organized in transnational networks, that one must read the works of Raphaël Liogier to begin to find one’s way around.

It emerges from a non-partisan sociological analysis that all this complexity of modern religiosities is organized around (for, against, alongside) the emergence of a way of thinking that can be called individualo-globalism and that forces traditional religions to re-found themselves in a new imaginary mold. The readers of Kairos should not feel alienated from this way of thinking which intends to reconcile attention to oneself and attention to the world (other societies). A culture of well-being, moderate hedonism, reinterpretation of the truths of traditional religions in the light of modern scientific knowledge, cultural liberalism, feminism, anti-speciesism, acceptance of sexual practices and minority mores, and more or less mystical ecologism: all these options contribute to the emergence of a post-materialist society

THE INTEREST OF THE PEOPLE

It is clear that this fundamental societal evolution will not take place without tension, without conflict, and sometimes without violence. However, all of these clashes, if they occur within societies, are usually on a small scale. They do far less damage than the good old wars between states that the military-industrial complex likes to see develop, which favors the clash of watertight civilizations rather than this uncontrollable mixing. A few hundred deaths with knives, ram trucks or even Kalashnikovs are much less profitable than millions of deaths with tanks, fighter-bombers and nuclear aircraft carriers…

These mongrel religious or spiritual practices, intermingled, are totally contrary to the logic of the Clash of Civilizations(7) which would allow to engage in serious, profitable and favorable conflicts to maintain the power of the dictatorial minorities who have always divided to rule. Finally, if it is uncomfortable for all those who need certainties to feel reassured (and they are numerous), this spiritual melting pot , which finally resembles quite strongly the complexity of the living, will perhaps preserve us from the tranquillity of military cemeteries.