THE OBSOLESCENCE OF POLITICAL PARTIES 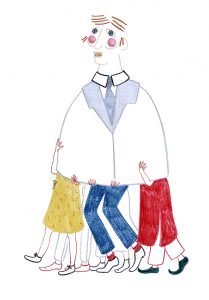 In these times of political mediocrity, where some and others dip into the taxpayer’s coffers, steal even from those who have nothing, resign, make themselves forgotten and then come back, where those who are not accused seem to be presumed guilty until their abusive practices are discovered, where even legal achievements are indecent and illegitimate, it is enlightening to read again the unpublished reflections of Simone Weil on the question of political parties: « If we entrusted the devil with the organization of public life, he could not imagine anything more ingenious. Our questions are answered by his reflections that are almost 80 years old. We find the vibration of words on our minds, invigorating our souls while opening TV, radio and newspapers in the hands of bureaucrats puts to sleep all revolutionary desires.

Kairos: Simone Weil, when was the invention of parties?

Simone Weil: The idea of party did not enter the French political conception of 1789, if not as an evil to be avoided. But there was the Jacobin Club. At first it was only a place for free discussion. It was not any kind of fatal mechanism that transformed him. It is only the pressure of the war and the guillotine that made it a totalitarian party. The factional struggles under the Terror were governed by the thought so well formulated by Tomsky: « One party in power and all the others in prison » . Thus on the continent of Europe totalitarianism is the original sin of the parties.

But they are now more present than ever, should we consider banning them?

It is on the one hand the heritage of the Terror, on the other hand the influence of the English example, which installed the parties in the European public life. The fact that they exist is no reason to keep them. Only the property is a legitimate reason for retention. The evil of political parties is obvious. The problem to be examined is whether there is a good in them that outweighs the bad and thus makes their existence desirable.

What would be the criterion of goodness?

It can only be truth, justice and, secondly, public utility. Democracy, the power of the majority, is not a good. They are means to the good, considered effective rightly or wrongly. If the Weimar Republic, instead of Hitler, had decided by the most rigorously parliamentary and legal means to put the Jews in concentration camps and to torture them to death with refinement, the torture would not have had an atom more legitimacy than it has now. This is not inconceivable. Only that which is just is legitimate. The crime and the lie are not in any case.

It is therefore wrong to think that the general will is the reflection of reason, whereas it can be the fruit of passions completely contrary to truth and justice?

Our republican ideal proceeds entirely from Rousseau’s notion of the general will. But the meaning of the concept was lost almost immediately, because it is complex and requires a high degree of attention. Rousseau started from two obvious facts. One, that reason discerns and chooses justice and innocent utility, and that every crime has passion as its motive. The other, that reason is identical in all men, instead of the passions, most often, differ. Therefore, if, on a general problem, each one thinks alone and expresses an opinion, and if then the opinions are compared between them, probably they will coincide by the right and reasonable part of each one and will differ by the injustices and the errors. It is only by virtue of such reasoning that one accepts that the universal consensus indicates truth.

We are now in the XXIe In the 19th century, we were in a form of dictatorship of the individual will, as if any choice that emanated from the individual was immediately good because it bore the seal of subjectivity and that, in fact, the pooling of each of these choices could only lead to a good collective decision.

The true spirit of 1789 consists in thinking, not that a thing is just because the people want it, but that under certain conditions the will of the people is more likely than any other will to be in conformity with justice.

Does this mean that a handful of individuals can be right in the face of a mass that is wrong?

There are several indispensable conditions for the application of the notion of general will. Two in particular deserve attention. One is that when the people become aware of one of their wishes and express it, there is no kind of collective passion. When there is collective passion in a country, there is a probability that any particular will is closer to justice and reason than the general will, or rather what constitutes its caricature. The second condition is that the people must express their will with regard to the problems of public life, and not only make a choice of persons. Even less a choice of irresponsible communities. For the general will has no relation to such a choice.

If there was in 1789 a certain expression of the general will, although the representative system had been adopted for lack of knowing how to imagine another, it is because there had been something else than elections. For some time — a short time — the representatives were really only organs of expression for public thought. Such a thing never happened again.

The mere statement of these two conditions shows that we have never known anything even remotely resembling a democracy. In what we call by this name, the people never have the opportunity or the means to express an opinion on any problem of public life; and everything that escapes particular interests is left to collective passions, which are systematically, officially encouraged.

What is the link with political parties? What would be their characteristics that would allow to think this absence of general will, and therefore of democracy?

Three can be listed:

By this triple character, every party is totalitarian in germ and in aspiration. If he is not in fact, it is only because those around him are not less than him. These three characters are obvious truths of fact to anyone who has come close to the life of the parties.

This is deeply interesting. The third point indicates the tragedy for the community of being dominated by groups whose existence is based solely on a desire to perpetuate themselves.

It is a particular case of a phenomenon that occurs everywhere where the collective dominates the thinking beings. It is the reversal of the relationship between end and means. Everywhere, without exception, all things generally considered as ends are by nature, by definition, by essence and in the most obvious way only means. One could cite as many examples as one would like in all fields. Money, power, state, national greatness, economic production, university degrees; and many others.

The good alone is an end. Everything that belongs to the realm of facts is of the order of means. But collective thought is unable to rise above the realm of facts. It is an animal thought. It has only enough of a notion of good to make the mistake of taking this or that means for an absolute good.

So it is with the parties. A party is in principle an instrument to serve a certain conception of the public good.

But the parties only think about their own growth, their own as well as that of production and consumption?

If the growth of the party is a criterion of the good, then there is inevitably a collective pressure of the party on the thoughts of men. This pressure is in fact applied. It is publicly displayed. It is confessed, proclaimed. We would hate it if we had not been so hardened by habituation.

Is truth then possible in this kind of organization?

The parties are publicly, officially constituted organizations that kill the sense of truth and justice in the souls.

Fantastic. It is one of the foundations of social psychology, the influence of the group on individuals and their mind…

Collective pressure is exerted on the general public through propaganda. The stated purpose of propaganda is to persuade, not to communicate light. It is true that the parties talk about education for those who have come to them, supporters, young people, new members. This word is a lie. This is training to prepare for the much tighter grip the party has on the thinking of its members.

Truth and party are therefore irreconcilable?

Suppose a member of a party makes the following public commitment: « WheneverI examine any political or social problem, I commit myself to forget absolutely the fact that I am a member of such and such a group, and to concern myself exclusively with discerning the public good and justice. This language would be very unwelcome. His own people and even many others would accuse him of treason. But more than that, it doesn’t even seem possible that such language is used. In fact, unless I am mistaken, it never was.

On the other hand, it is quite natural, reasonable and honourable for someone to say: « As a conservative », or: « As a socialist, I think that… ».

The truth would thus be relative, depending on who is stating this or that fact?

If there is no truth, it is legitimate to think in such and such a way as one happens to be in fact such and such a thing. If one recognizes that there is a truth, one is allowed to think only what is true. One then thinks such and such a thing, not because one happens to be in fact French, or Catholic, or socialist, but because the irresistible light of the obvious forces one to think that way and not otherwise. But the motive of thought is no longer the unconditioned, undefined desire for truth, but the desire for conformity with a teaching established in advance.

In fact, with very rare exceptions, a man who joins a party meekly adopts the attitude of mind which he will later express in the words, « As a monarchist, as a socialist, I think that… » It is so comfortable! For it is not to think. There is nothing more comfortable than not thinking.