« THE DEBTS LEFT TO US BY NUCLEAR POWER 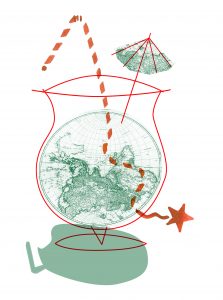 Nuclear power is rarely mentioned when we talk about ecological debt. This industry and its numerous pollutions represent however the most extreme illustration of what the ecological debt means « the debt accumulated by the industrialized countries of the North towards the countries of the Third World because of the plundering of resources, the damage caused to the environment and the free occupation of the environment for the deposit of waste, including greenhouse gases coming from the industrialized countries(1).

The grandiloquent assertions of French leaders about France’s energy independence thanks to nuclear power seem quite hypocritical when one knows that uranium comes from the subsoil of its former African colonies: Gabon, Niger (the poorest country in the world) and Mali. France obtains uranium at a lower cost, at the cost of political interference and catastrophic environmental, health and social consequences for local populations.

With 58 reactors in operation, France is the most nuclearized country in the world per capita and has the second largest reactor fleet after the United States. Belgium has 7 nuclear power plants and worries its German, Dutch and Luxembourg neighbors with the most densely populated nuclear site in Europe: within a radius of 75 km around Doel, no less than 9 million people live.

When we think of the numerous health and environmental risks that can impact populations for tens or even hundreds of thousands of years, we see that nuclear power also corresponds to another definition of ecological debt, a temporal one, which refers to the debt of one or more human generations to future generations. If the profits go to the industrialists, the multiple costs and the debt generated by nuclear power are ultimately borne by the community.

Despite the hypocritical declarations of newly elected presidents making people believe in a renewal of relations with Africa, the various French governments continue to perpetuate Françafrique, « this hidden system articulating interventionism, networks of influence, corruption, economic and military agreements »(2). As proof, Emmanuel Macron appointed Edouard Philippe, a former lobbyist in charge of relations with elected officials for Areva, to the post of Prime Minister, before he was mayor of Le Havre. « He has therefore defended the actions of a company that, in Niger, has irreversibly polluted the territories of indigenous peoples and bathed in financial scandals, » said the Sortir du nucléaire network following the announcement.

Belgium is not to be outdone when it comes to neo-colonial relations with its former possessions. Little known to the general public, Belgium obtained a partial cancellation of its debt to the United States in compensation for the uranium supplied for the manufacture of the first two American atomic bombs dropped over the Japanese cities of Hiroshima and Nagasaki, causing the first nuclear holocaust. « The uranium came from the Shinkolobwe mine (near Likasi, formerly Jadotville) in the Katanga province of the Belgian Congo. First act, Belgium benefits from a debt cancellation thanks to its colony whose natural resources it exploits. Second act, some fifteen years later, it bequeathed to the independent Congo, with the complicity of the World Bank, the debts it had contracted to exploit its natural resources and its people.(3)  »

Let’s revisit a lie frequently propagated by too many governments and industrialists, especially since the COP21 in December 2015 in Paris: nuclear power would not pollute. This linear and simplistic statement ignores the entire production chain, focusing only on final electricity consumption. The calculation of CO2 emissions generated by nuclear energy implies taking into account all the CO2 emissions of the life cycle of uranium fuel (extraction, transformation, concentration, ore enrichment, recycling, waste management) and that of nuclear power plants (construction, transport, operation, dismantling). According to Ademe(4)These emissions are 8 times higher than those generated by wind energy.

A FINANCIAL DEBT BORNE BY ALL

Like many other investments (purchase of military equipment), the choice of nuclear power is imposed on the population and poses many risks to its environment. However, the decisions to turn to this energy are far from having been taken collectively. In addition to the risks of accidents and health risks, there is the financial burden that this energy represents, borne by the State and therefore the taxpayers. The construction and management of a new nuclear power plant entails enormous technological and financial risks: a new reactor costs about 9 billion euros. When it is not the public power that directly finances the astronomical cost of this construction, the population pays the extra costs through their electricity bills.

Faced with the ecological debt and its current, past and future social disasters(5)Concrete reparations must be demanded and implemented, whether or not in financial form. « These reparations only make sense if they finance another model that responds to the basic needs of all populations, indigenous peoples, women, small farmers, informal workers, wage earners… » (6) .

The fight against the ecological debt and nuclear power also requires support for mobilizations, such as those in Bure in France in the department of La Meuse, where new forms of struggle are being experimented with, or those in Notre-Dame-des-Landes against the airport or in the Val de Suze in Italy/France against the high-speed rail line: political advocacy, associative mobilizations, direct actions and legal actions are making it possible to resist these deadly projects of the old world, in order to build new ones!