THE CRIME OF CHOLERA IN HAITI 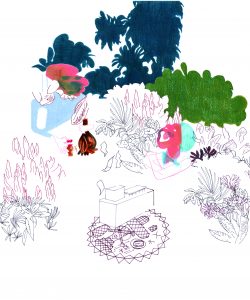 Ten years ago, on January 12, 2010, a devastating and deadly earthquake struck Haiti. A tragedy that cost the lives of nearly 300,000 people. Following this natural disaster, international aid poured in and the military occupation intensified, with the pretext of stabilizing the country.

This Caribbean country is often presented as the poorest country in the Americas when in fact it is an impoverished country. References in the minds of Westerners often boil down to NGOs and humanitarian aid to a so-called chaotic country. A chaos skilfully orchestrated by the Western countries: the colonizers of Europe and then their friends in North America. As filmmaker Raoul Peck reminded Le Monde in 2016 following Hurricane Matthew, a new disaster that hit the country:  » We are also paying for foreign interference that has never ceased since the very founding of this rebellious Republic . » Impoverished by colonial debts, foreign occupations, IMF injunctions and other predators, Haiti is extremely vulnerable to the Covid-19 pandemic.

The first black republic, a rebel country for having dared to resist the French empire, the history of Haiti is punctuated by interference and political crises. The health infrastructure is inadequate to the point where only about 100 beds are currently available for intensive care for a population of 11 million people. This pandemic endangers once again a large part of the population and reminds us of the cholera epidemic brought in 2010 by UN troops.

On the occasion of the commemoration of the 10th anniversary of the earthquake, REHMONCO, Regroupement des Haïtiens de Montréal contre l’Occupation d’Haïti, wrote in January 2020:  » This disaster is not only the result of a natural phenomenon, but above all, the product of an archaic, underdeveloped social system, in which all the elements constituting its structure contribute to the reproduction of misery, impoverishment, exclusion, marginalization and oppression. « The 2010 earthquake was an opportunity for the economic and political elites to deepen the neoliberal therapy as Naomi Klein details very well in her book The shock strategy. However, the term natural disaster is to be nuanced, as we can sadly notice these last weeks with the Covid-19 pandemic, the States and especially their populations are well deprived after decades of weakening of public services in the South and more recently in the countries of the North.  » It was not the earthquake that caused the disaster in Haiti, but the slums and poverty, the lack of infrastructure and social services. The disaster had already occurred. It had a name: neoliberalism « said Frédéric Thomas in L’Humanité on January 13, 2020.

CHOLERA, BROUGHT BY A PEACE MISSION…

If the most common images of Haiti are the splendor of this Caribbean island and the poverty that suffocates a large part of its inhabitants, few Westerners have heard of cholera. And yet, soldiers of the UN force are responsible for the introduction of Vibrio cholerae in Haiti. UN missions have done nothing to combat cholera, while the money available for the disease would only support about 10% of the infected population. Since its outbreak in October 2010, the cholera disease has caused more than 10,000 deaths and 800,000 people infected. It was finally in May 2014 that a High Level Committee for the Elimination of Cholera was established by the UN through its Secretary General. And it wasn’t until 2016 that the Secretary General’s office finally acknowledged a role in the cholera outbreak. This statement followed a report by Phillip Alstom, professor of law at New York University, special rapporteur with a dozen other experts on human rights issues, he said that the UN’s refusal to acknowledge its responsibility and compensate the victims illustrates a double standard of the organization.

To the book by Ricardo Seitenfus, author of several works on this period in Haiti and on cholera, and in particular The failure of international aid to Haiti. Dilemmas and misguidanceRicardson Dorce, a Haitian writer, replied:  » All in all, is international aid in Haiti really a failure? What are the real objectives of international aid? Isn’t aid even conceived as an obstacle to the development of impoverished countries? Can we really direct international aid towards productive investment? Hasn’t the plan of the so-called international community — in complicity with the transnational non-governmental organizations and the various elites of the country — always been to maintain the country in its situation of extreme poverty and dependence through aid? Who benefits from the chronic and persistent crisis facing the country? « . For example, of the money sent to Haiti in 2010, only 0.6% of the money went to Haitian institutions or companies and the Haitian state directly managed less than 1% of the funds. Almost all of the aid went to international organizations in donor countries and was used to pay for management costs, intermediaries and foreign personnel.

On many occasions, popular organizations and social movements have asked the UN for the total withdrawal of the occupying troops from MINUSTAH, the closure of the Mission and reparation for the damage and crimes committed. The presence of MINUSTAH, contrary to what appears to be a UN peace mission, has been a terrible affront to the dignity and capacity of the Haitian people, to the exercise of their sovereignty and the respect of their rights. Not to mention the women, young people, girls and boys who have suffered abuse, violations and sexual exploitation by troops who are still unpunished and who were sent to perform a mission of support and stabilization of the country. The electoral process that led to the installation of the highly unpopular Jovenel Moise as president took place despite everything in early 2017 with the participation of less than 21% of the electorate. Despite controversial results and denunciations of a large number of candidates for their relations with various criminal activities. A so-called peace mission when there was no war. Too unpopular MINUSTAH was replaced at the end of 2017 by MINUJUST… The UN, the Security Council, the countries that contribute to its budget and contribute troops, however, have the obligation to repair the crimes and human rights violations committed, including the establishment of a system to obtain universal access to drinking water.

By looking at the history of the country, the geopolitical, economic and social context, one quickly notices the external causes of the impoverishment of a country, presented as poor, with a redundant image in most of the media as being unlucky or even at fault for inaction or mismanagement. Raoul Peck, responding to a journalist from Le Monde when asked about the curse that would affect the island,  » as proclaimed by an American pastor in 2010 « , formulated his reply as follows:  » This cliché of « cursed country » is a sign of intellectual laziness, it is a quick and practical way to hide the real history of this country, the real sources of its current situation, as well as the responsibility of some and others in this history. There is nothing cursed about it. There is simply history, with all its contradictions. The aid that has been given to Haiti for decades is contradictory, random and paternalistic.  »