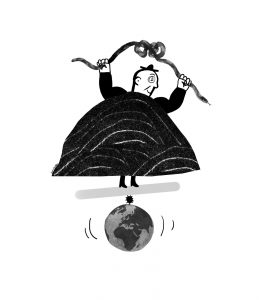 I am writing this text on a Sunday, March 29. A little more than 10 days after the beginning of this period of confinement for some, of lockdown but not too much for others, of lockdown parties for some, of  » stay at home  » for those who like French terms that make sense. I used to love to go out, I stay at home. I used to love having roasted coffees in crowded bistros, I have them, alone, and soluble. I used to love kissing, hugging people, shaking hands with my students, and now I don’t go out at all, even seeing in every person I meet a potential virus nest or disease den. I used to love interacting in class, now I interact in front of my PC. I took care of myself, I take care to wash my hands at least 30 times a day. I was a fanatic of long walks, I rediscover with pleasure the microcosm of my apartment.

This virus that we thought would never reach us never ceases to surprise us: hats off to the artist! Would it only affect the Chinese? It impacts 9/10ths of the world’s population. It would never stop people from having fun and traveling? The number of closed establishments, heavy fines, and travelers grounded or forced to postpone or even cancel their trips are endless. It would only affect the poor, the disadvantaged? It has caused the death of singers, politicians, doctors, musicians, the British Prime Minister, Prince Charles of England, and even the footballer Blaise Matuidi. What a horror! We thought we were invincible, but we were brought down by a virus passed by a pangolin and then by a bat. We thought we were invulnerable, young and old. The day before yesterday, however, we learned that a 16 year old girl had fallen, struck by lightning. We thought we were safe, thanks to our smartphones that play as much music as the purrs of specialists in everything and anything? Here we are, scared, bruised, eaten up by the overabundance of information in all directions — which leads us to consider patenting a new word, infoxication. We had the fatuity to think that it would first affect the poor, the remote countries? After China, Europe and the United States are the hardest hit by this lung infection.

In this context, thehubris of our leaders, of our hotheads, of our assiduous of the appearance, of these proselytes of the party at any price, of the luxury travel and in any season, of the excesses of our Western lives, is crying and critical. We wanted to be Hercules, but here we are like Achilles, planted and struck down by his sore spot, the place he never thought about, the spot he cared about once in an eternity. This hubris, a mixture of ignorance, minimization of the danger, then resignation before a divine intervention, is reflected very precisely during this crisis. The divinity? But yes, of course. The Science deity supplants God, Allah and Yahweh. In the striking image of Pope Francis, the only one — for health reasons — to pronounce on the balcony of St. Peter’s Square in Rome theurbi et orbi, answers the striking image of hundreds of people who, clearly disregarding the recommended measures of social distancing, crowd in front of the clinic of professor Raoult in Marseille. So muchhubris beforehand could only lead to another one, correlative to the overconsumption and to the virtual and abusive communication: what exhausts the most malignant and nuanced spirits, at present, is to fight at all times and on all the corners of virtual bars against the conspiracy theories and other rumors as inventive as unfounded. We would almost laugh about it (which is what Laurent Ruquier’s Grosses Têtes do every day without an audience) if it weren’t so distressing and so toxic, in every sense of the word.

On reflection, therefore, this period of crisis is the most glaring symptom of a society sick of its excesses. It will have its martyrs, its heroes, its bastards, its denouncers, its antagonisms. At least the fights between members of the same family or between friends will be avoided, since meetings are currently forbidden in the majority of countries, particularly in the European Union. Hubris, moreover, also of the European Union which had to admit, with its tail between its legs, that it had underestimated the danger. As an organ of defense and protection of hundreds of millions of inhabitants, we do better…

These hubris in series show the flaws of a system and form a dangerous, even deadly and distressing geometric figure with exponential growth, and drawing a diagonal that sows panic everywhere, between announced — but never real — shortages of toilet paper and crying shortages and confirmed, half-spoken, of medical equipment by lack of caution and precaution.

We know exactly how we got here and we know that we will get out. This crisis reveals, in the manner of an ancient tragedy (we have not invented anything, the Greeks who were laying siege to Troy were almost decimated by a plague, like the unexpected illness that brought poor Pericles, who thought he was untouchable, to his knees in the middle of a war. Bad luck!), the weaknesses, the flaws but above all the immense fragility of our societies based on unlimited profit and production, as well as on speculation.

It also reveals, by contrast, the immense strength of people who go to work, a job generally devalued by a certain disconnected intelligentsia, with the flower in the gun but the ball in the belly as one would go to war. It allows everyone to rediscover what solidarity, fraternity, loyalty, altruism and the collaborative economy are. Above all, and this is salutary, it gives us an opportunity to reinvent our lifestyles, to articulate them differently, to rediscover boredom, to take the time to read, to listen to music, to observe a joyful nature in full springtime expansion, without having to suffer the hubbub of flying airplanes, of cars that roar to go faster and faster and nowhere, of electric scooters that no longer clutter the streets — well, well, that’s curious -.

This vast and infinite subject deserves a warm welcome from the proponents of degrowth and anti-productivism: everywhere, the signs of localism and of nature reclaiming its rights can only give reason to those who, for a long time, have been sounding the alarm about the exhaustion of the planet under the blows of unrelenting capitalists. It is not certain that they will be properly heard: the economy is already recovering in China, European leaders (again Thierry Breton, European Commissioner, on Sunday 29 March on Europe 1) and the doughboy with the magic wick of the United States keep on repeating that the country cannot let itself be paralyzed by this crisis. Oh, it’s not a crisis, they say. A small crisis. A « crisounette » that will pass quickly, right Jair Bolsonaro? This will pass for the Easter celebration. At the very least, for the beginning of Ramadan, we can start again « as before ». We know precisely that it will potentially not be « like before ». A transformation of our essence as social beings has taken place and will continue to take place. The crucial question is that of the duration and sustainability of this change and this saving learning of sobriety. Louis Chedid, humanist singer, said on the RTBF radio that it was for him  » the first time that we put the human before the economy « . May he be right.

The civilizational challenge is indeed there: to take into account this severe warning to finally understand and respect nature and biological common sense. Otherwise, nature will easily replace the little humans who wanted to venture, without compass or landmarks, without rules or sense of respect, in a game too risky for them. As big kids, we thought that managing this pandemic would be as easy as shooting all the enemies in a bad shoot ’em up game.